A strange message in a library

A few days ago I entered a small and ancient library in China Town, and while I was looking for some interesting book to borrow, a torn slip of paper fell from a shelf.

On it, a strange message… some kind of poem I could not give a sense to…

On a side, someone wrote a series of number with a pencil, no idea what could they mean…

Here you can see what I'm talking about: 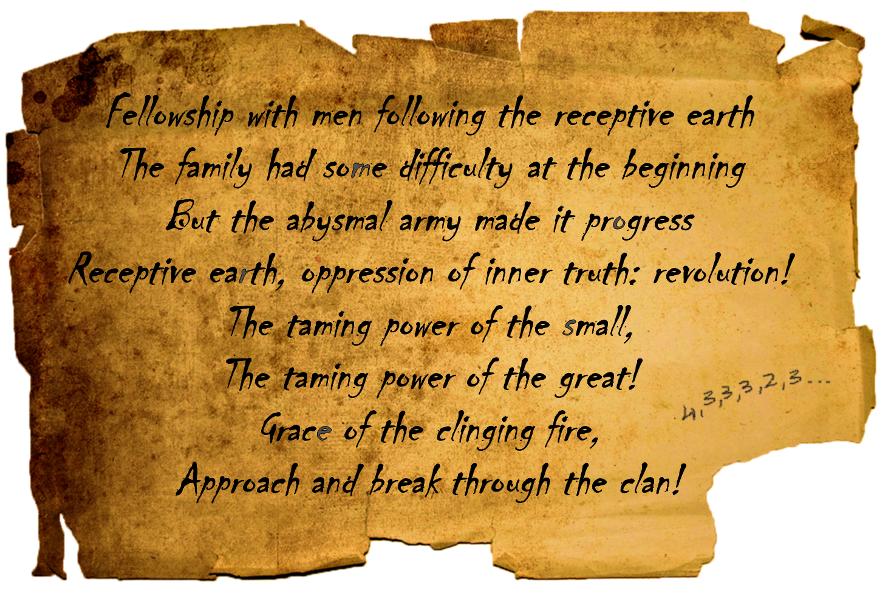 I'm pretty confident that a secret message is hidden behind these lines… could you help me to find it?

(Here is the plain text version of the message, if you need it)

You'll need some knowledge (or some googling...) to solve the first level of the puzzle

The message ends with an exclamation point (!) and contains a comma (,)...

A Very Partial Not as Partial as before answer to get somebody else started, since nobody has attempted this, and I won't have the time in the next couple of days: The poem is composed of

names for I Ching hexagrams, which have a numerical value.

With the hint in place, it seems likely that the values I mentioned above are irrelevant, as already deduced by M Oehm. So it's down to finding the correct way to interpret the symbols themselves.

Collecting everything on one line we get the following (in unicode. if you have display issues, M Oehm's answer has ascii art)

Since it's surprisingly tricky to decode without additional numbers, I'll just leave it at interpreting the handwritten number sequence as being the whole message, which would then read, ominously enough,

I'll try decoding the rest of the poem later.

Looks like the previous person trying to solve this got the message wrong, it doesn't read "YOU DIE", instead the beginning is very likely "YOU DISCOVERED"

After that, though, I'm getting nowhere, and writing a small piece of code to try every word in a dictionary to see if it fits would take a bit of time, (which I don't really have), so please feel free to continue from here.

The third hint seems to make it painfully obvious that there is at least one typo in the problem. M Oehm discovered a very plausible solution that assumes there are actually two.

As it stands, the message is

You discover a fin in the fog. TY you can go home.

OP EDIT: I'm really sorry for the many mistakes this puzzle did contain, and which I hope I've finally fixed. The puzzle has now been modified to give the intended solution, that is:

"You discovered the I Ching, now you can go home!"

Something has gone wrong in the creation of this puzzle, that I think has a good idea behind it, but a dramatically problematic execution (just after a long revision I found that the table I used to convert symbols into code was uncorrect).

I'll take all the blame for this, hoping it will help me in the future to create better and less faulty puzzles; and I take the occasion to apologize with all the guys who tried (and managed, despite the errors!) to solve the puzzle, and who lost a lot of precious time just because of my superficiality.

I looked up the numeric values of the hexagrams in the text.

There are faded letters in the note which spells out "morse".

Hopefully someone else will have some ideas of what to try next, or at the least I will have saved someone a little effort looking things up.

Another partial answer that builds on previous answers by Bass and Barker and on Xenocacia's observarion. I might well be heading into the wrong direction here.

It has already been found that ...

... the poem consists of the names of some of the 64 hexagrams in I Ching. Xenocacia has found that some of the letters in the image are slightly lighter. These letters spell Morse.

... the hexagrams have numbers, but the also consist of six horizontal bars. These bars are either broken (Yin) or unbroken (Yang). The hexagrams in the poem are:

(The hexagrams are shown sideways here, tilted by 90° to the left.)

... I haven't found a way to get a sensible Morse message from these hexagrams. An obvious way would be to read them top-down (or left to right in the table above), where an unbroken bar is a dash and a broken bar is two dots*.

Other possible readings are to substitute an unbroken bar by just one dot or to place all hexagrams next to each other and then read line-wise. None of that has given me any useful readings, but that may be owed to the difficulty of reverse-engineering a stream of unseparated Morse signals.


________
*) When I do a web search for "hexagrams morse", one of the first results is a preview of The Book That Proves Time Travel Happens, which suggests just that and shows that the clinging Fire reads tuna and the Family decodes to mix.

So, first of all, thanks for that super interesting puzzle! I've spent the all evening trying to solve that (but didn't solve it yet).

First of all, found ‘Morse’.

Tried to google text, found I-Ching, because the phrases of the strange message look similar to I-Ching names. And, the I-Ching hexagrams look similar to Morse code. For example, ䷌ looks like -.----.

But there is nothing similar in International Morse Code sheet because the length of each my code is bigger. Ok, then maybe 4, 3, 3, 3, 2, 3… means that I should join codes and then split them using given numbers as length? Anyway, the result of that doesn't make any sense for me. Then I had started to interpret ䷌ not as -.---- but as -..---- because there are actually two short lines between big lines. Also joined given result and tried to split it. But still nothing. Sometime later I found this image and realized that maybe I read hexagrams in wrong way. Previously I had seen Hunter’s comment about turning hexagrams clockwise and read ䷌ as -.----. But after I saw the image I have an idea to read hexagrams from top to bottom as we read Excel sheets. And looks like now I have to understand how to apply given numbers, maybe it will help to convert hexagrams to Morse codes correctly.

Not the answer you're looking for? Browse other questions tagged cipher enigmatic-puzzle visual story knowledge or ask your own question.

9
Justice and Fairness: Part 2
8
Puzzling puzzling phrases
7
Somebody has kidnapped Jason Baker!
30
Bill the Conspiracy Theorist
9
A strange message
5
Same Bat-Time! Same Bat-Channel!
61
R.H.P.C. crossword puzzle
7
A combination lock, I can only read half the hints, please help me!
31
A trip to the library