The untimely death of Dr. Wenzel: What give-away clue is hidden in the crime scene image?

Dr. George Wenzel and his colleague Dr. Martin Hupp are two expert biochemists researching brain-wave-changing drugs. Their work has long been regarded as being worthy of the Nobel Prize, in particular since their recent success with large cats. They showed that they could boost the intelligence of those animals to near-human level. The main challenge they had to overcome was the side-effects on the cats. Being so intelligent made them extraordinarily aggressive. (Maybe they realized their situation in full?)
Anyway, the doctors' latest discovery was generally assumed to be so fundamental, that there wouldn't be a choice but award them the prestigious prize.

So it came as a shock that on the very day a press-conference was announced which would disclose their latest results, Dr. Wenzel was found dead in the animal laboratory. He was ripped to pieces by one of the tigers they were experimenting on. His colleague Dr. Hupp could not explain at all how Dr.Wenzel could have been so careless.

"He normally took all precautions very, very seriously," he said. "And this time it was especially tragic. We had just discovered the proper drug to get all the positive effects and keep the animals calm. I tested it myself, and I've left George all the notes - see there on the table. I really don't understand this. The formulae does work properly. I have even cross-checked it this morning. The only explanation I can possibly think of is that he tried to modify the mixture even a bit more... But why would he do that?"

Inspector Edo Clu, who is leading the investigation, is wondering the same thing. However, it does not take him long to have Dr. Hupp as his prime suspect. Who else would have more profit of the untimely end of Dr. Wenzel than him? The Nobel Prize, after all, can only go to living scientists.

So he gives the surroundings another very close look, then calls Dr. Wenzel's mother to ask her a single question, and based on the answer arrests Dr. Hupp on suspicion of murder.

The puzzle is: What did inspector Edo Clu ask Mrs. Wenzel and what was the answer?

Now the two relevant photos from the crime-scene are shown below. (please use your imagination a bit, I'm not an artist) One shows the desk of Dr. Wenzel on which a note from Dr. Hupp is found together with a couple of post-it blocks and some pencils which have been used all over the lab.

The second shows a group of labelled bottles all standing in a group (no sorting) on the shelf. According to Dr. Hupp, these contain the latest drugs. The bottles are labelled with the post-its and pencils found on the desk (as are other items in the lab on different photos not shown.) There are two distinct handwritings on them. 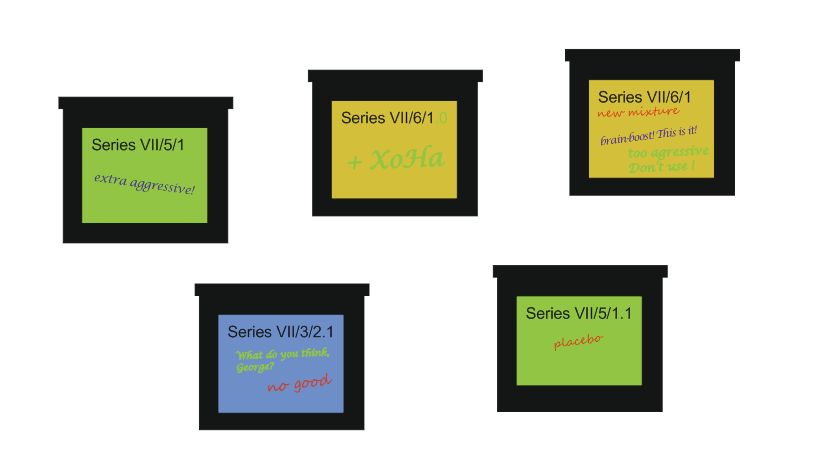 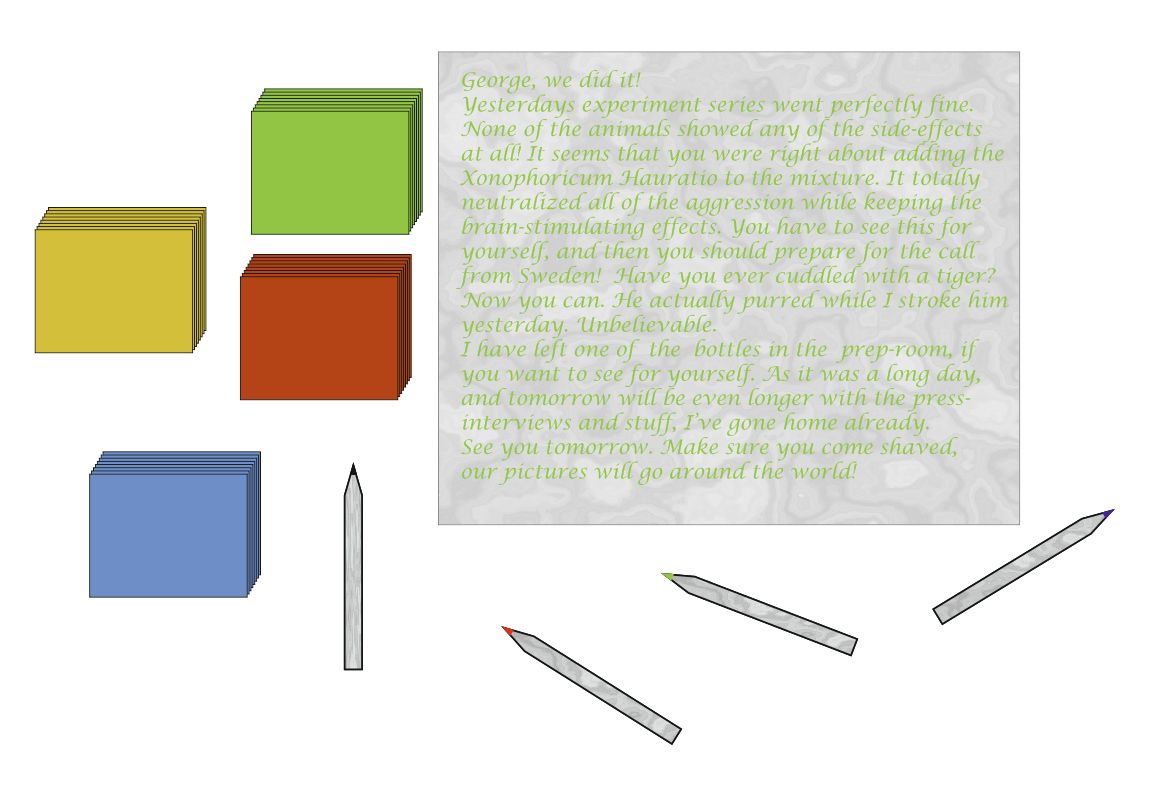 Transcription of the letter:

George, we did it! Yesterday's experiment series went perfectly fine. None of the animals showed any of the side-effects at all! It seems that you were right about adding the Xonophoricum Hauratio to the mixture. It totally neutralized all of the aggression while keeping the brain-stimulating effects. You have to see this for yourself, and then you should prepare for the call from Sweden! Have you ever cuddled with a tiger? Now you can. He actually purred while I stroked him yesterday. Unbelievable. I have left one of the bottles in the prep-room, if you want to see for yourself. As it was a long day, and tomorrow will be even longer with the press interviews and stuff, I’ve gone home already. See you tomorrow. Make sure you come shaved, our pictures will go around the world!

and the five bottles:

Series VII/6/1; new mixture;brain-boost! This is it!; too aggressive; Don’t use!

This is my first 'crime' puzzle and I'm sure it could be better, but I hope it's still good fun. Asking questions in the comments is welcomed and may lead to edits. If there is no solution in a week (which I highly doubt), then I will start giving explicit hints.

Did your son suffer from deuteranopia (red-yellow-green color blindness)?

Deuteranopia is characterized by an inability to distinguish between colours in the red-orange-yellow-green spectrum except by brightness.

The two Series VII/6 boxes are identical save for the labeling. We can reasonably infer that Dr. Wenzel died when Mr. Cuddles (the tiger) mauled him to death after receiving the too-violent version of the serum. This suggests that the means of committing the murder was related to doctoring the labels.

The serum labeled "+XoHa" is the ideal serum, but carries a green-on-yellow label that Dr. Wenzel wouldn't be able to read easily. This wasn't a large problem when there was only one series 6 serum, but when a second series 6 label was accidentally printed and applied to a too-aggressive serum, it became important that he be able to distinguish old from new. Dr. Hupp's green writing barely contrasts against the yellow background and so Dr. Wenzel writes "new mixture" in red, which he's able to see slightly better on the new too-aggressive serum where the "too aggressive" warning isn't visible to him.

Knowing about Dr. Wenzel's colour blindness, Dr. Hupp pens in "brain-boost! this is it!" in bold blue letters on the too-aggressive serum label and invites Dr. Wenzel to cuddle with Mr. Cuddles. Dr. Wenzel, upon seeing the labels, immediately sees the bright blue nicely contrasted and doesn't even bother to check for his red "new mixture" label contraindicating the serum since it's difficult for him to discern and is redundant thanks to the helpful, clear label applied by his colleague.

Cuddling with Mr. Cuddles doesn't go so well for him.

Upon learning that Dr. Wenzel is color-blind and vulnerable to this kind of attack, Inspector Clu arrests Dr. Hupp on suspicion of deliberately confusing the identities of the two serums, resulting in a classic case of tigercide.