The most probable key

You broke into John Doe's house and found the safe. It has a combination lock with 4 dials ranging from 0 to 9 each. Unfortunately it's a good safe, which doesn't click when one or more digits are correct. Luckily the owner seems to be quite forgetful – as one can see from the following sheet of paper attached to a side wall: 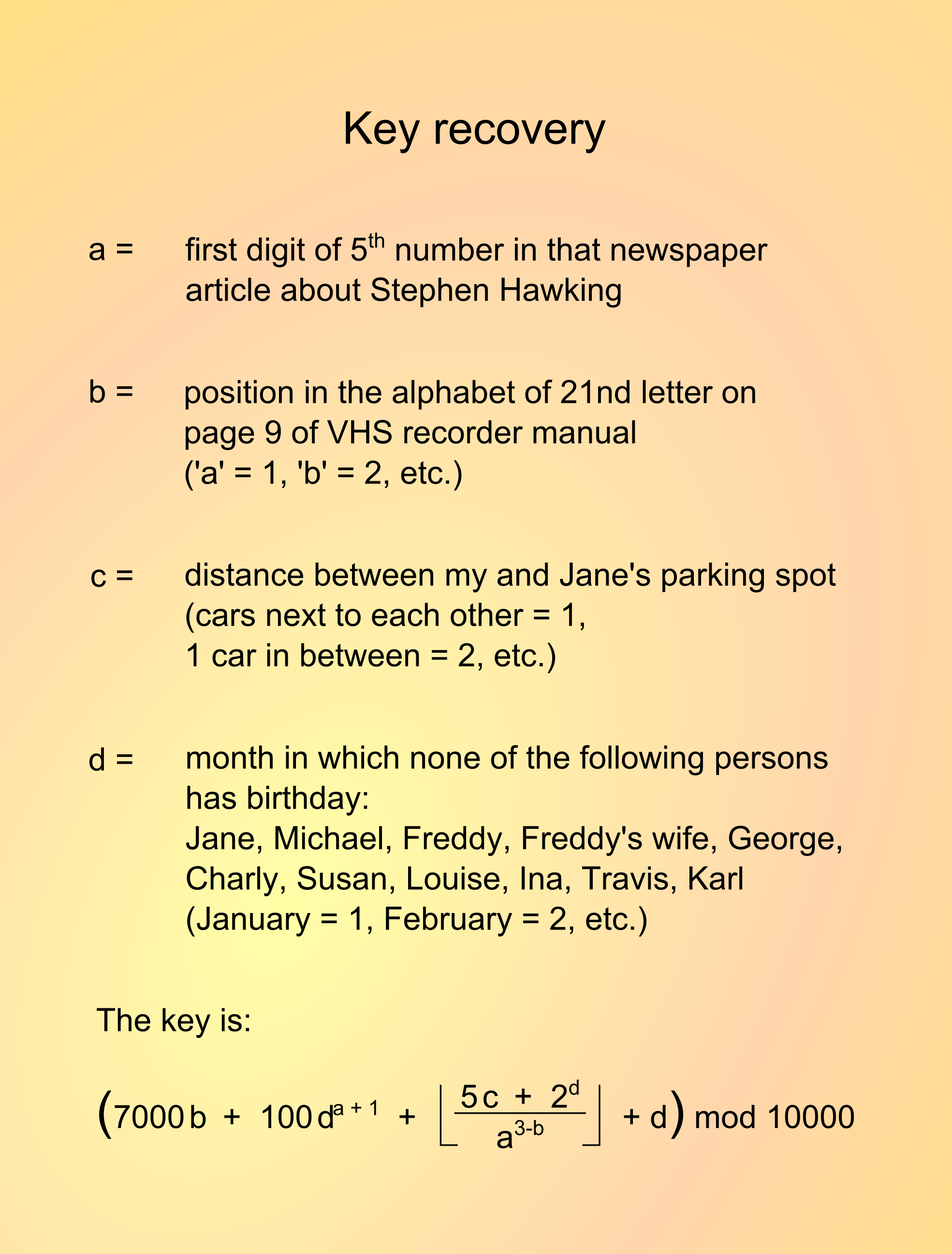 With the knowledge available to you, which 4-digit key is most likely to open the safe?

There's a significant amount of intuiting you can do to reduce each of A, B, C, and D, but given the fact that the soft answers give over 56 thousand possible answers that map into less than 10 thousand, the number theory of the problem naturally lends itself to a lot of collision, complicating the probabilities. Thus, a brute force answer lends itself well to this.

7101 with 54 possible combinations of a,b,c, and d mapping to it. Not taking into account any of the "soft" figures like birthdays or letter frequencies.

If after multiplying the soft probabilities together you get a better ratio than 1/1040, you're better off with the soft answer. Otherwise, your best bet is to use the brute force answer.

Thanks to @kayzeroshort for this one. According to Benford's Law, 1 is the most likely with a probability of about 30%.

E is the most common letter in non-technical English with a probability of 11.16%, which might possibly be shifted by the fact that it's a VCR manual.

Then you just math the rest.

So your chances in all are:

.3 * .1116 * .2 * .46644 = ~.00321 or a .3121% chance of it working. It's slightly better than brute force assuming all assumptions hold up. We made assumptions that the VCR technical manual was a reasonable sample of modern English (and that it was in English in the first place), and that all of John's friends were American and were born in America fairly recently.

Because A, B, C, and D mix to form the 4 digits, doing a straight multiplication to get probabilities is a little disingenuous. Additionally, 5203 can only be made in 5 combinations of A, B, C, and D, compared to 54 from 7101 from the brute force.

After 2 months without John Kossa editing his answer on this question there is still no complete solution. So I decided to post an answer to this question myself. It is also very unlikely that somebody takes the effort to put his own answer, now that John Kossa already solved the puzzle halfway. 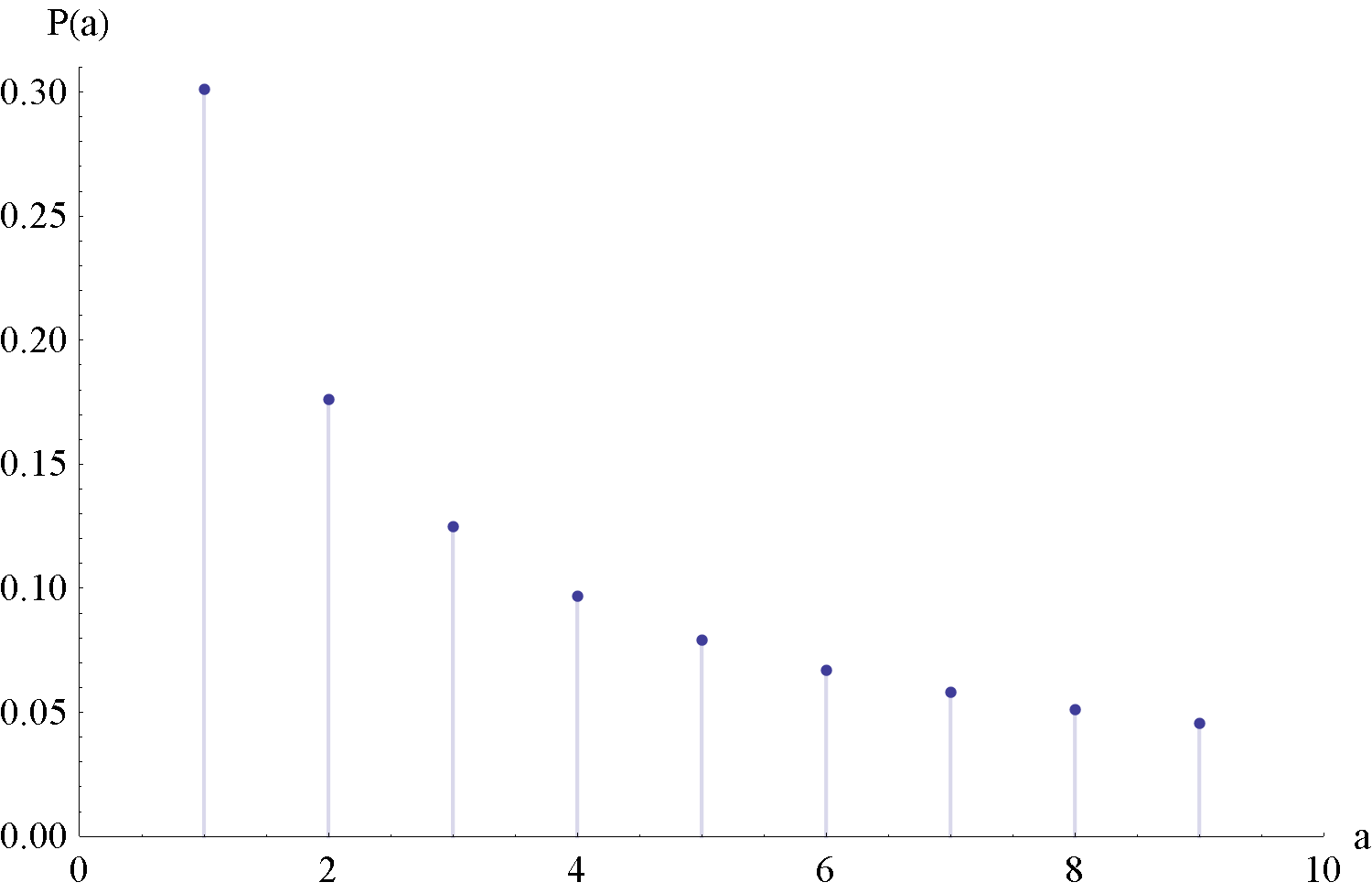 Letters are also not equally distributed. As this is the 21st letter on a page of a (probably) English manual we cannot use the distribution of first letters of a word, but the general probability distribution. This distribution looks like: 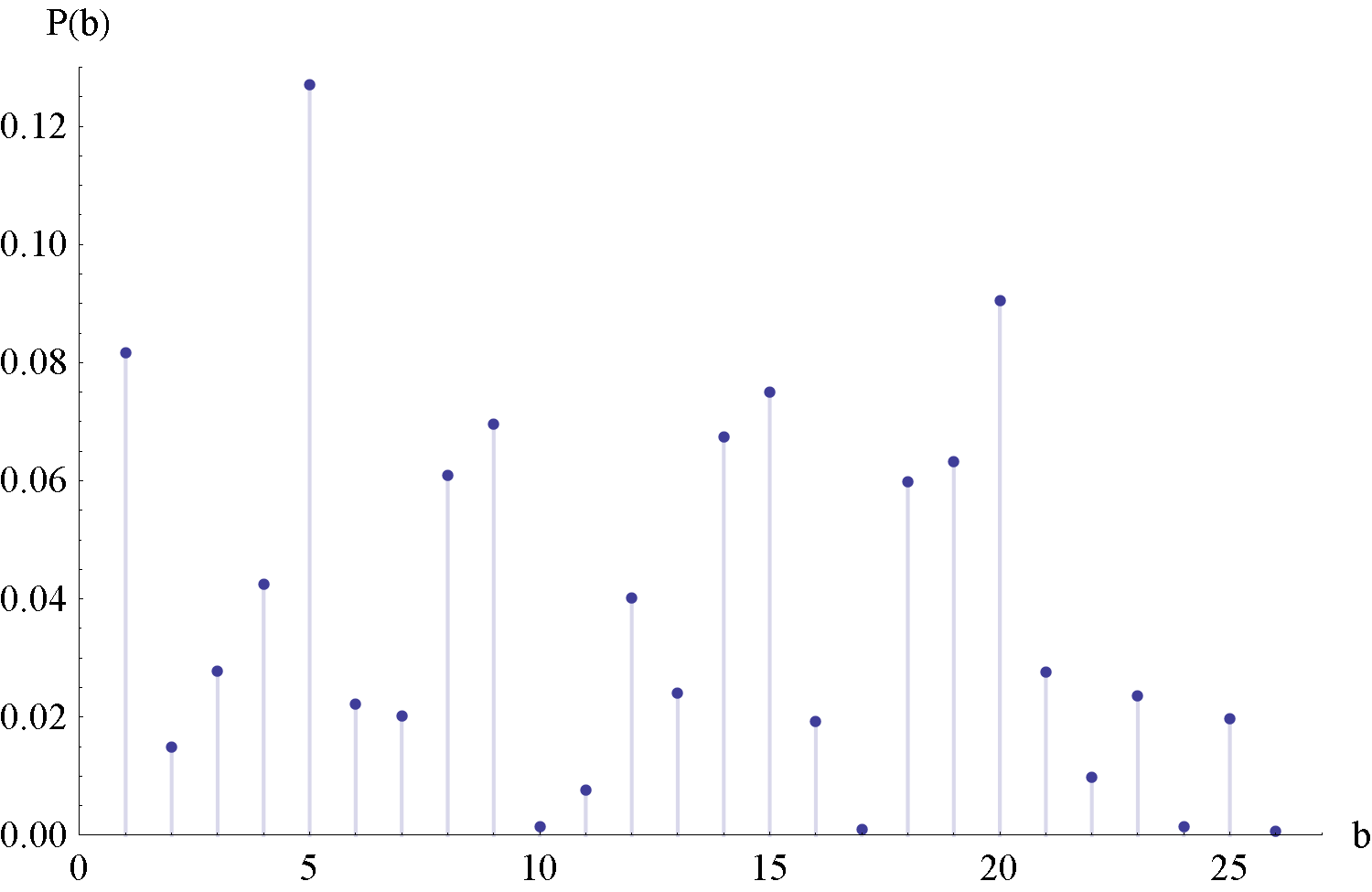 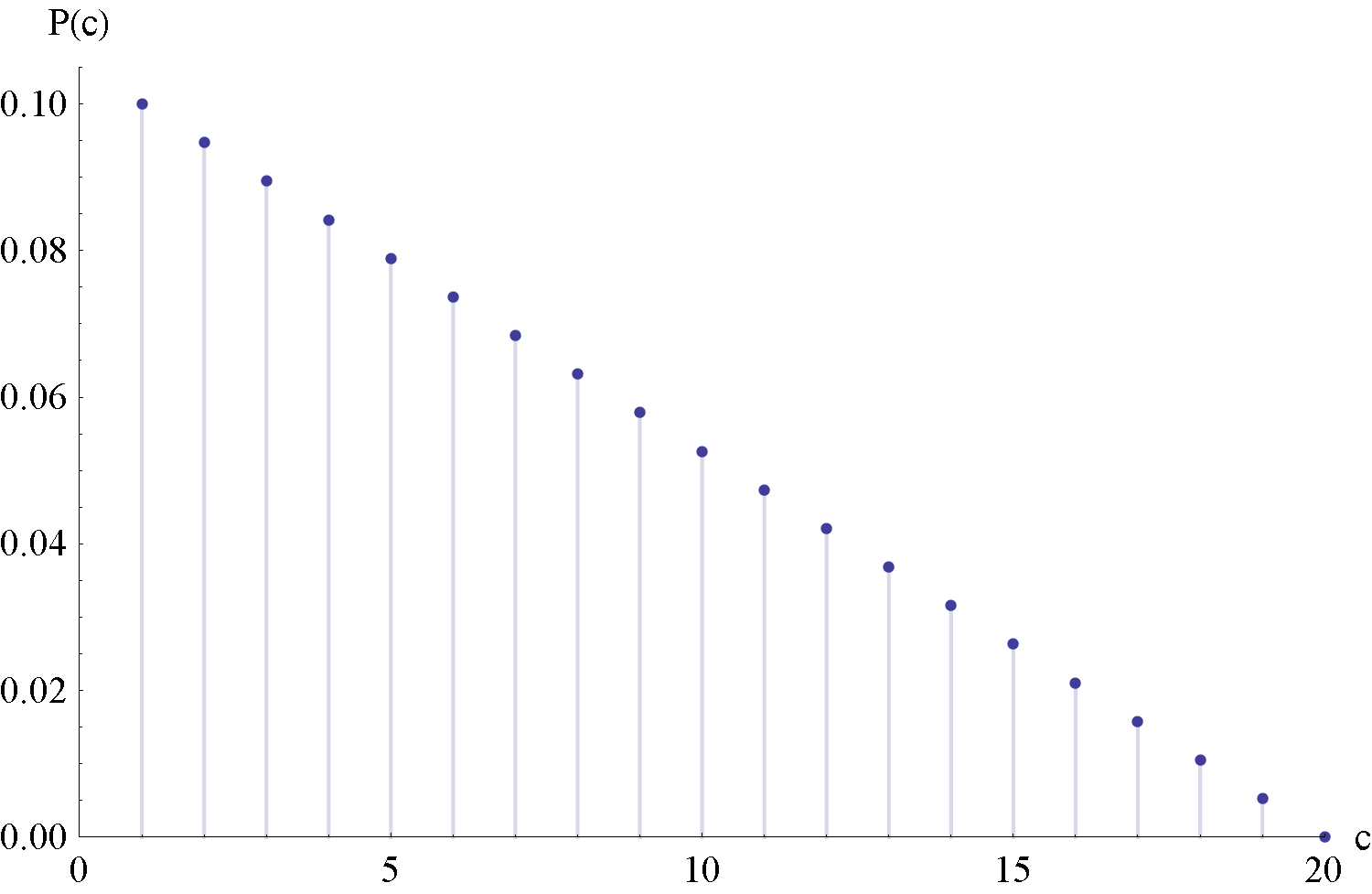 This one seems to be less obvious than I thought. We may assume that the piece of paper with the instructions is meant to give a clear answer for John Doe (who knows the birth dates of these 11 people). The answer is only unique if the 11 people are born in 11 different months, so that $d$ gets its value from the remaining month. How this looks in terms of probability was answered in this question. The probability distribution is $$P(d) = \frac{1}{m_d \left( \sum\limits_{i=1}^{12} \frac{1}{m_i} \right)}$$ where $m_i$ is the length of the $i$th month. As February is the shortest month, the probability that none of the 11 persons is born in this month is maximal with $P(2) = 8.97 \, \%$. 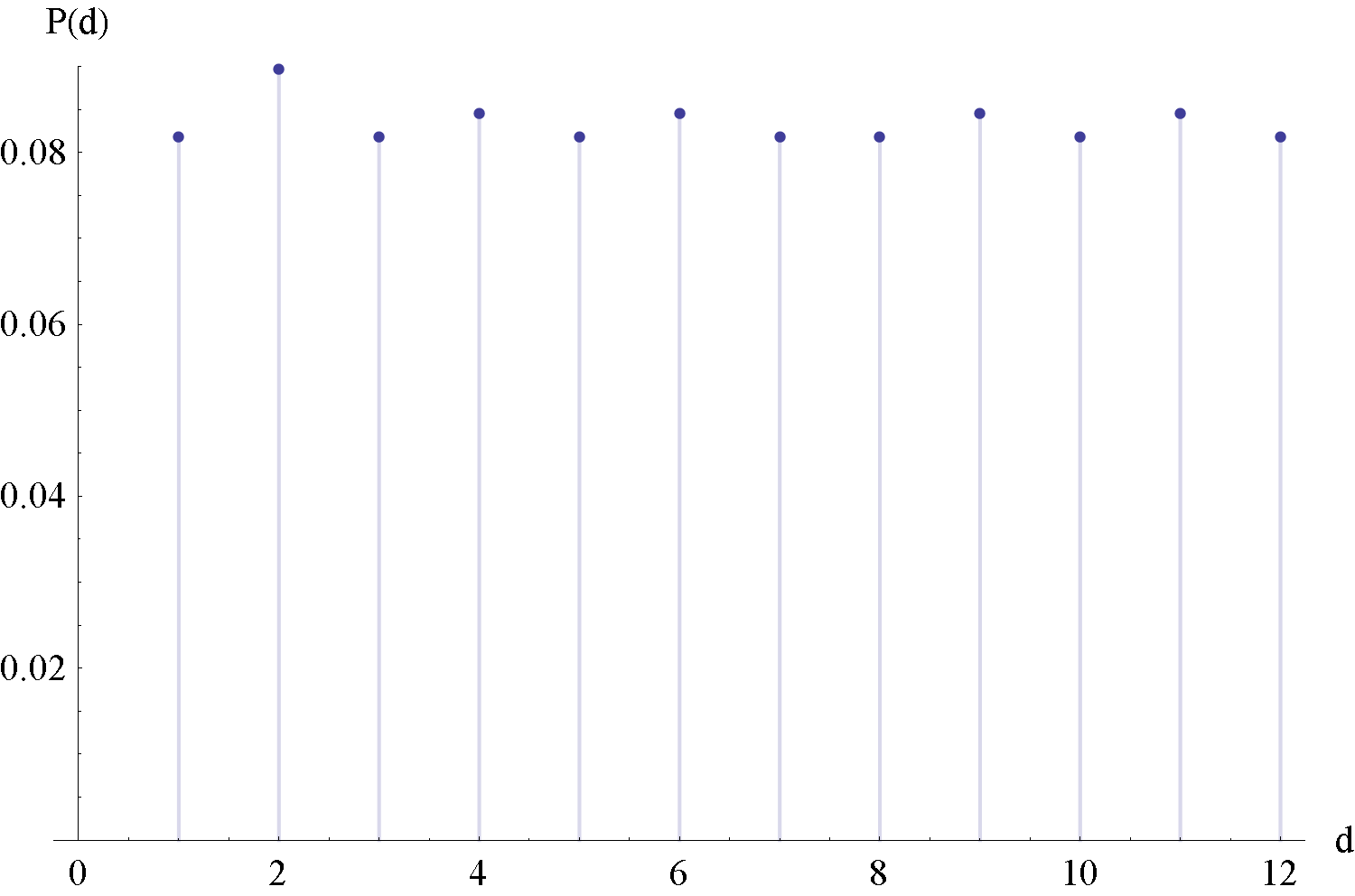 If we now take the most likely values of

... there are in total $53352$ possible $(a, b, c, d)$ tuples which map onto $10000$ possible keys. This means it makes sense to make a histogram of all possible keys. But instead of just counting the number of possible tuples that map onto the same key, we weight the tuples with their individual probabilities. 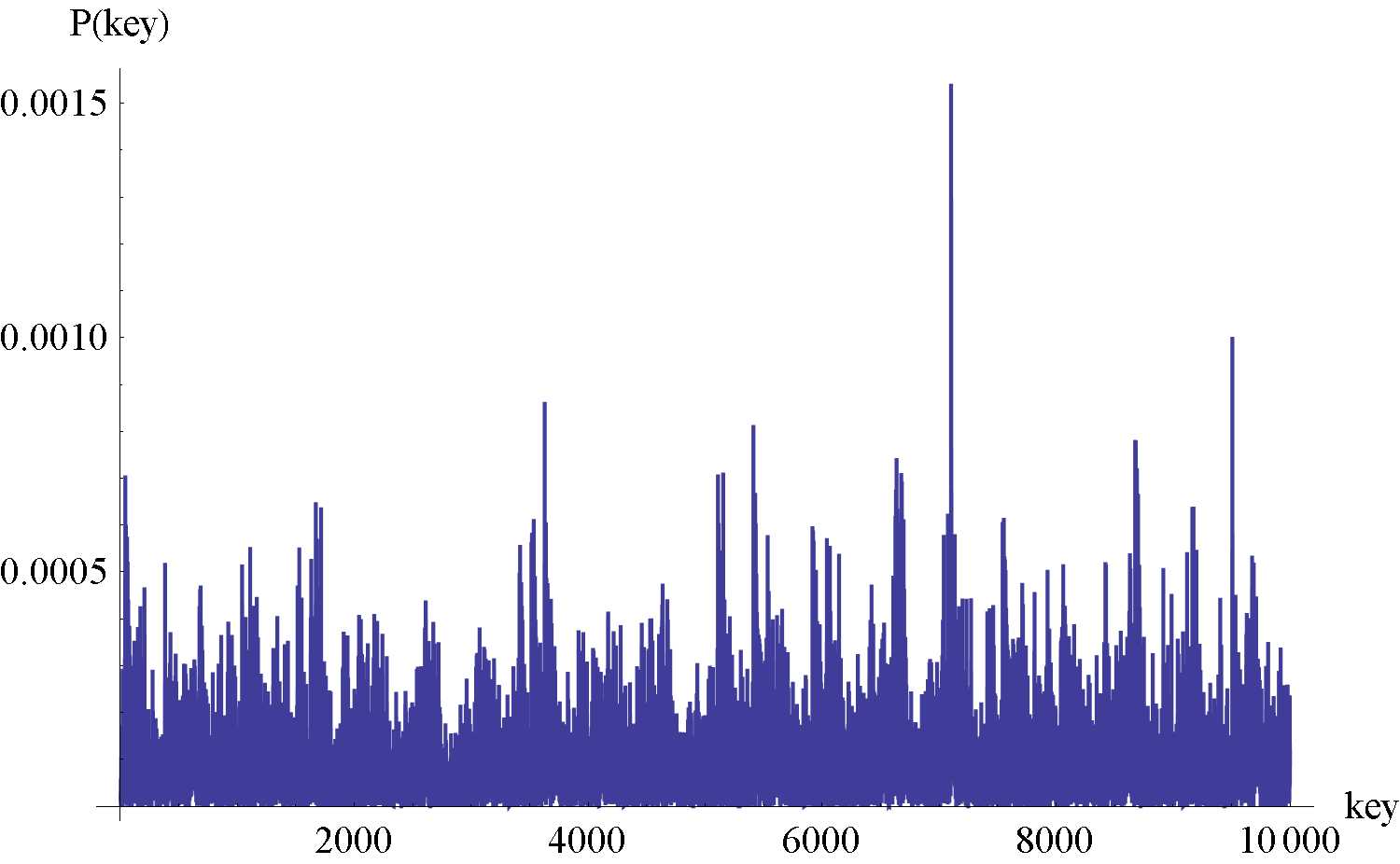 6
Probability of nobody being born in a specific month

7
Key and lock puzzle
8
8-bit Lock and Key
6
The Most Powerful Number
3
Scrambler and key!
10
What's the most rewarding path?
15
Creating the hardest 10x10 maze
6
Unseen prisoners figuring out their hats
4
Most intersections with Olympic rings