What is the proof for odd days table used for solving calendar related questions? The table is given below, from the website Talent Sprint. 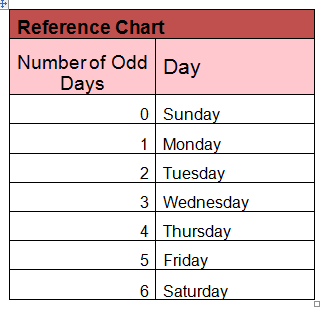 The page you've taken the image from says this:

In a given time period, the number of days that are more than the weekly cycle are called odd days.

meaning that by "odd days" they mean "days left over when you remove as many whole weeks as possible".

They're working with the so-called proleptic Gregorian calendar which is what you get when you extend the calendar system we're using now into the past. (In reality, that system wasn't introduced until the 16th century.)

When you do that, you find that the very first day of year 1 is a Monday. So if you count the number of days from then until a particular date (inclusive), and then remove whole weeks (thus getting "odd days"), then you will get 1 for a Monday, 2 for a Tuesday, and so on. The table just shows that correspondence.

So there isn't really anything much to prove, beyond the fact that in the proleptic Gregorian calendar January 1, AD 1 was a Monday -- which is basically just a matter of counting :-).

(One thing worth knowing that they don't say explicitly, though they use it once, is that in the Gregorian calendar everything repeats perfectly every 400 years; in particular, the number of days in 400 years is a multiple of 7. So instead of starting from year 1, you can start from 1601 or 2001 and get the same answer.)