I'm Stumped does anyone know what this could possibly say? 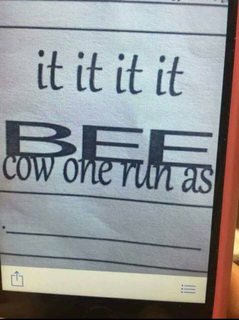 I can not figure out what this puzzle is. I have tried, I have researched and googled, and nothing is working. Anyone have an idea?

Okay I think I finally have it:

Its bee on words ("It's beyond words")

Or it could also be said:

Four its bee on words ("For it's beyond words")

The first part is as everyone assumed it was along the lines of:

And the second part was tricky:

The word "Bee" is resting directly on a series of words that exemplify the different parts of speech, but don't make a sentence. We have "Cow" (a noun), "One" (which can be a number or a pronoun), "Run" (which can be a verb or a noun), and "As" (which can be an adverb, preposition, or a conjunction). These words were likely chosen because, while being only 4 words, they cover the essential parts of speech that compose a sentence. So this part of the puzzle is probably just "words." When "Bee on words" is spoken loosely, it sounds like "beyond words" --finishing the sentence.

Other possible variants could be:

After days of chewing on it, that's the best I've come up with. I hope someone can verify whether or not it's the right answer on your Facebook.

I think it may also include the phrase -

"reading between the lines" for its long beyond words

" reading between the lines for its long beyond words"??

Make a bee line for it. I think it could be the answer.

7
"EVARELTO" - What does this mean?
16
Hm... Quick Rebus Time!
18
What does this Java code represent?
4
Rebuses are so cliché
8
A Mentor's Reassurance - The disturbed books
14
Rebus puzzle "cancelled"
17
Rebus puzzle: .25.25 .25.25
12
Science related rebus wordplay, what is it?
1
What Famous Idiom Does This Small Code Snippet Represent?
19
My teacher gave me a puzzle one day