How can I solve the Gear Cube Extreme?

The Gear Cube Extreme is another Mechanical Puzzle. I ordered it not so long ago and a friend of mine "accidentally" scrambled it. Now I want to solve it again but I have no idea how or even where to start as it is my first non standard Rubik's cube to solve.

Here's how I solve it:

I'm using R, L, B, F to indicate a 180-degree turn of each side. This is because, as you know, you cannot rotate each side except in increments of 180. U, D, however, will refer to 90 degree turns of the upper and lower layers.

If I refer to a corner using three letters, those letters indicate the faces that corner touches. For instance, the UFL corner is the upper front left corner.

This step is pretty easy, honestly, and you should be able to do this intuitively using the side moves. However, a couple algorithms that can help if you're truly stuck on this: use R B R to move the edges to a more understandable position, and R2 or L2 to rotate the middle slice 180 degrees to solve the centers.

For now, keep one hand firmly on two pieces of the center layer, and don't move it. If you do, you'll need to restore it, which isn't a difficult problem, but I'm not going to cover how to do it because it shouldn't happen. We'll restore the middle layer at the end of this step.

After this, you're on to the top layer corners. One algorithm should be sufficient here: R U R U' R' (U' D) R U' R U R'. This swaps the UFL and UBL corners. Executing this strategically should lead you to a solved upper layer.

If the two middle layer pieces you've been holding onto are flipped, then execute the following algorithm: D' R D R (D' R)2 D' R' U' D R'. At this point, there will be one yellow corner on the top, and a corresponding purple corner on the bottom. Proceed from the beginning of Step 2 - this shouldn't take long to complete.

If there's a problem with a particular center, just rotate an adjacent L/R or F/B slice 180 degrees and check again.

3. Move the edges to the correct layers

This step takes only one algorithm: (R U R' U')5. This swaps the UF and BR edges. Use this as many times as needed, placing an incorrect edge in each place and swapping them.

4. Move the edges into the correct positions

For this, you need two algorithms. These images are courtesy of Ruwix. 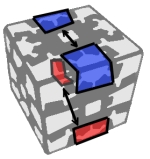 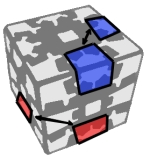 This should cover most cases intuitively. Use U and D to move the pieces in position.

If you end up with three pieces on one layer that need to be swapped, then do not solve the middle of the three first and you'll be alright. To do this, use the second algorithm twice - the first time will flip two edges on the other layer, but the second time will flip them back.

5. Rotate the edges into the correct orientations

These two algorithms will do strange things. They both turn the bottom front edge piece in different directions, which is really the focus of them, but they also turn the UL, UB, and UR edges as well.

The first step is to solve the bottom-layer edges. If the top layer has a solved edge, move it into the UF position. If it doesn't have one, do so immediately after you solve the first bottom-layer piece. For each unsolved edge on the bottom layer, execute the appropriate algorithm above.

If the cube is not solved, flip it over. Repeat this process for all the edges again.

If the cube is still not solved, flip it over again. Once you repeat the process again, the edges are guaranteed to be solved.

This document provides a much simpler solution!

Here is an extract from the document:

This site also has steps to a solution, with some pictures to assist: http://ruwix.com/twisty-puzzles/gear-cube-extreme-ultimate-how-to-solve-gearcube-solution/

Not the answer you're looking for? Browse other questions tagged mechanical-puzzles twisty-puzzles geared-puzzles or ask your own question.