Tomorrow is the annual meetup for the Northwest Region Marble Lovers Association. The days festivities will include various marble games, admiring collections of marbles, a guest speaker who will talk about the virtues of glass spheroids, and running an impressive Rube Goldberg machine that you've spent the past few months setting up.

The most important part of the meeting, though, is the cake. The cake (chocolate-marble, of course) has a single marble dropped in the batter before baking. Out of the 12 attendees, whoever gets the piece with the marble in it will host the next years meeting!

Normally, the host would mark part of the cake pan so that they could know where the marble is, but you're a bit of a klutz, and you dropped the marble into the batter without seeing where it went. The marble has a diameter of half an inch, and the cake pan is round, with a radius of 6 inches.

You realize that, since you don't know where the marble is, there's a chance that you'll run into it while trying to cut the cake. You don't want to remove the batter and start over - that would mess up the marbling of the cake, and be a waste of perfectly good ingredients! You decide to make a second cake, though it may be a bit of a rush to finish it on time.

The only other pan you have left is a rectangular 9 inch by 13 inch cake pan. Fortunately, that pan is roughly the same area, so the original recipe still works. You make up a second set of batter, add it to the pan, and are about to place the marble when -oops! - you drop this marble too! The event is getting close, so you decide to bake both cakes and hope for the best.

Now you have two delicious cakes, but don't know where the marble is in either of them. You want to minimize the probability of slicing into the marble while serving the rest of the guests. The only requirements are that all cuts are perfectly straight, and that in the end there are 12 equal area pieces, though the pieces do not have to be congruent. You can assume that the knife is perfectly sharp and that cuts have no width. You may trim parts of the cake off, but trimmed pieces can't be large enough to potentially contain the marble. You must take the cuts required to trim the cake into account in making your probability calculations.

What is the optional strategy for cutting each of the two cakes? Which cake offers the best overall chances of avoiding the marble?

Edit:
I myself do not know what the optimal strategy is, or really how to prove it, which I should have stated when I first posted the question. Because of this, to keep the question from staying open indefinitely, the answer with the best chances of avoiding the marble was accepted on October 27th, 2017

The best strategy found was

Cutting the rectangular cake into a 2x6 grid of rectangular pieces, with only a 22.35% chance of hitting the marble.

This answer was provided by both Penguino and Nopalaa. However, Penguino found a better way to cut the circular cake, so overall provided the best chances of avoiding humiliation. Both showed good attention to detail in how they answered the questions and showed how they arrived at their probabilities.

For the rectangular cake I agree with Nopalaa's conclusions.

For the circular cake:

There is a 5.75 inch radius circle in which the marble may reside. It has total area of 103.8689 inches^2. If I cut as shown in my diagram, then my total line length is 55.1934 inches. After subtracting almost exactly 2.25 square inches to account for regions where the cutting lines overlap each other or extend out past the 5.75 inch radius, then the 1/2 inch wide lines cover an area of 24.8467 inches^2. If the marble is within this area then one of the cuts will hit it. So the probability of hitting a marble in this cutting is 23.921%. It is possible to do slightly better by replacing the inner 'square' with a octagonal shape with 120 degree interior angles in the corners without internal diagonals and 150 degree interior angles in the corners that are connected by interior diagonals (see diagram). In this cutting the side lengths of the octagonal shape are 1/cos(15)*sqrt(36pi/(12(1+tan(15))) = approximately 2.726 inches. Total length of cut lines is 54.876 and the subtracted overlap area is still almost exactly 2.25 inches. So the lines cover an area of 24.687 inches^2 and the probability of hitting a marble in this cutting drops to 23.768%. I can't find anything better than that.

The green region is the outer circumference where the marble cannot be positioned. The grey lines show the regions where the marble could be hit when I cut, the slightly darker regions are the overlap areas that need to be removed. 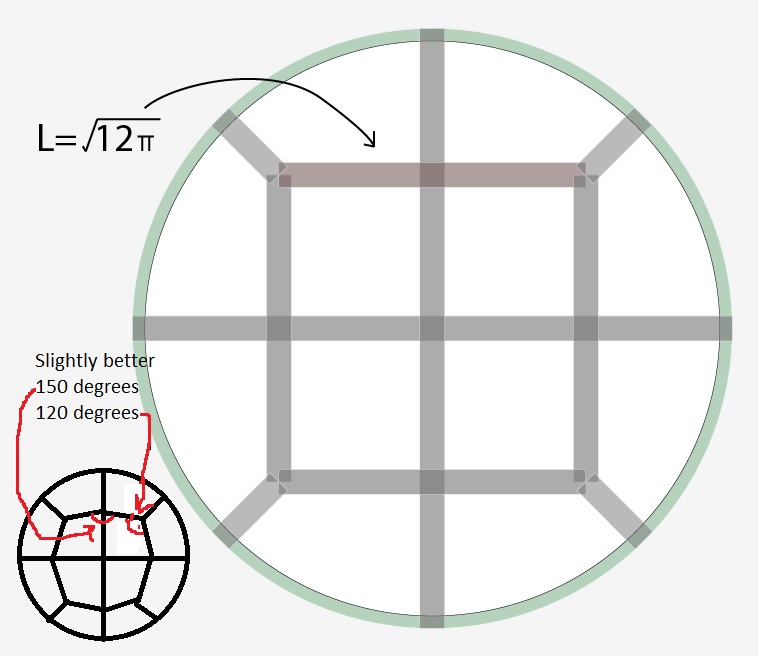 The best i can do so far is from the rectangular cake, minimizing the chance of ruining it with approximately

probability. The way of it:

Also i testes all 6 way of slicing this rectangular cake with parallel cuts to the edges of the cake, and this is the best. Tell me if it needs clarification, i am from Hungary.

7
Divide 3 cakes into 4 equal parts?
7
Maximum number of pieces of equal area you can obtain by cutting a pizza a certain number of times
9
Separating the Pieces of a Rubiks Cube
19
Ernie and the Cake Cutting
6
Squaring a cross one more time
12
Ernie and the Revisitation of the Aunts
13
Ernie and the Case of the Singing Sisters
19
Piece of Cake for King Solomon
4
Cutting a Rectangular Board