Who killed Boggs? A chandelier’s view 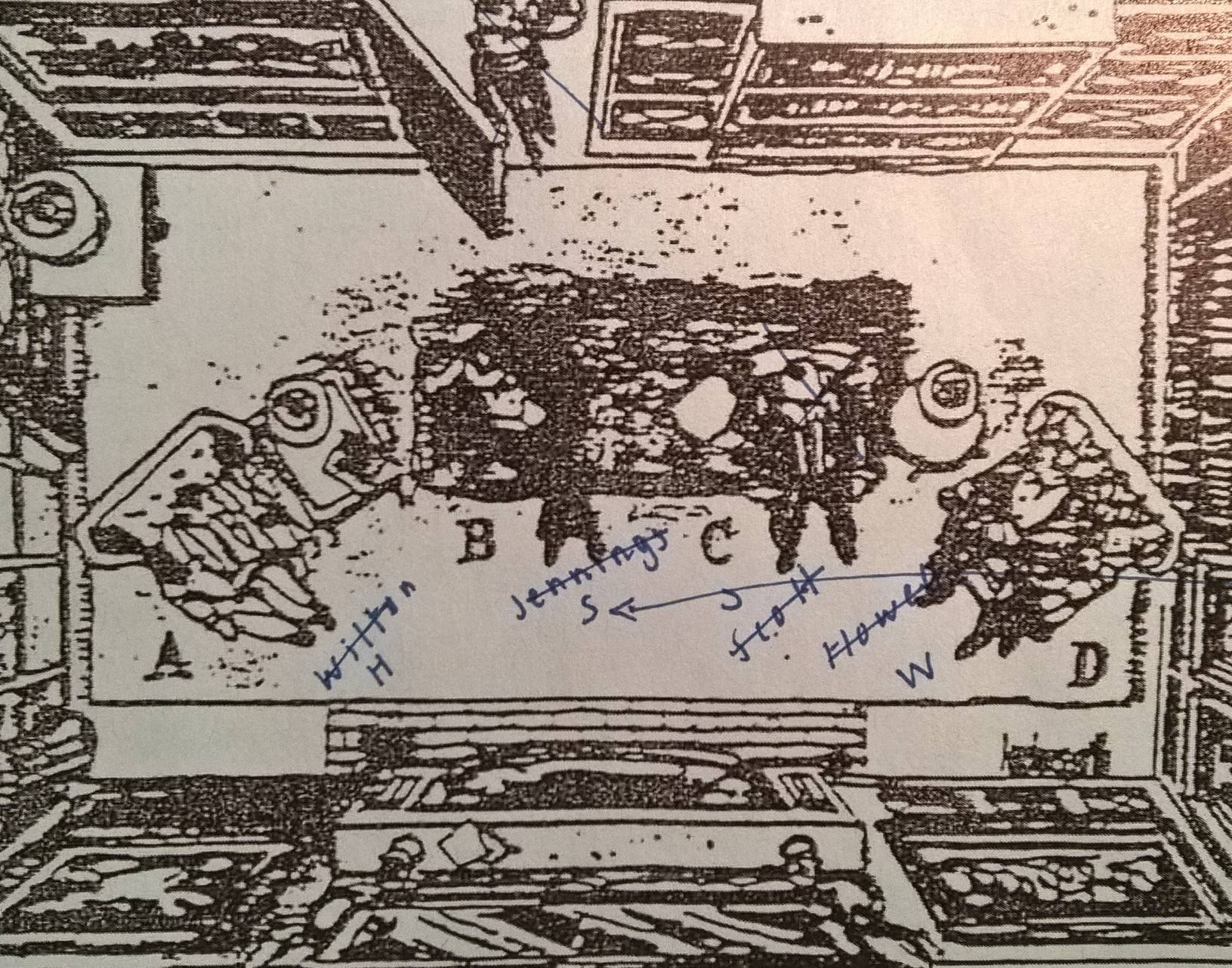 Boggs has been found dead in the club lounge, his iced tea poisoned. Four men, seated on a sofa and two chairs in front of the fireplace, are discussing the foul deed. Their names are Howell, Scott, Jennings, and Wilton. They are, not necessarily in order, a general, schoolmaster, admiral, and doctor.

The following are events that occur or true statements that become apparent as their discussion progresses:

Suddenly a hand moves stealthily to put something in Jennings's Coke. It is the murderer. No man has left his seat and no one else is in the room. What is the profession of each man, where is each one sitting, and who is the murderer?

I am sure that this charming puzzle predates Dilys Winn's "Murder Ink" - I suspect Henry Dudeney as the perpetrator. I have taken the liberty of appropriating Dr t's excellent answer format, but I come to a different (and I believe correct) conclusion about the dark events of that evening:

is General Scott who turns to Wilton, but is also about to poison Jennings.

is Admiral Jennings who has a sister.

I come to this conclusion because:

By clue 5. Howell is sitting on a chair (A or D) but has the schoolmaster to his left so he must be in A. The schoolmaster is in B, and since (wisely) he does not drink soda (clue 4) he cannot be Jennings or Scott (clue 1), and by elimination is Wilton. The general is next to Wilton (clue 2) but if he were in seat A he could not see the waiter leave, so is in seat C. Since Howell is not his own brother-in-law (clue 5 again) he must be the doctor, and the admiral is in seat D. By clue 3, Howell is married to the admiral's sister. So Scott is not the admiral but the general, and finally Jennings is thrown into seat D. Only the person in seat C could reach to poison Jennings.

An earlier version of the problem title described it as a "locked room mystery", which implies an apparently impossible crime. The earliest locked room mystery, I believe, was the atmospheric "Murders in the Rue Morgue" by Poe. At heart this theme involves conjuring, and so the greatest modern exponent I know of is David Renwick in the UK TV show "Jonathan Creek", where the detective's day job is inventing magic tricks. Despite the stupendous implausibility of the plots (I don't know how the actors keep straight faces at the denouement) his conjuring ideas are very clever.

My answer diagram got far too messy to post but I will offer this conclusion:

Admiral Jennings is an innocent man.

The poor General Howell is about to be poisoned by the man in position D.

Doctor Scott is sneaking some poison into General Jennings's Coke

I come to this conclusion because:

The Admiral must be Jennings and he has to be in a chair with somebody on his left. He must be in chair/position A. The schoolmaster is on the left of Howell and so must be in position B. The general sees the door close in the mirror and turns to talk to the innocent man (not the poisoner...otherwise he wouldn't be able to do the poisoning) and so he must have someone on his left which places him in position C. That leaves the killer in position D and the only one left is the Doctor...Scott.