A time traveler is collecting treasures.

He is using a space-time ship to transport between 5 different place-rooms. Each place has 1 precious treasure from the ancient times in each of 5 time zones.

What is the maximum number of treasures he can get? 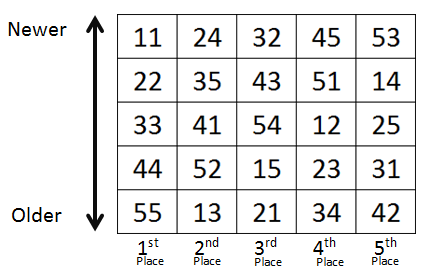 The best I found (by creating a brute force program) is

There are many combinations of this that will work. One of which is

I found 164,551 that should work assuming my program is written correctly (and assuming not all rooms must be visited), so I'm not even going to begin to try to put them all here or manually test all of them.

My understanding of the third rule is that once a room is visited in an older time, treasure can't be obtained in a newer time. With this in time, the best solution I've found is: 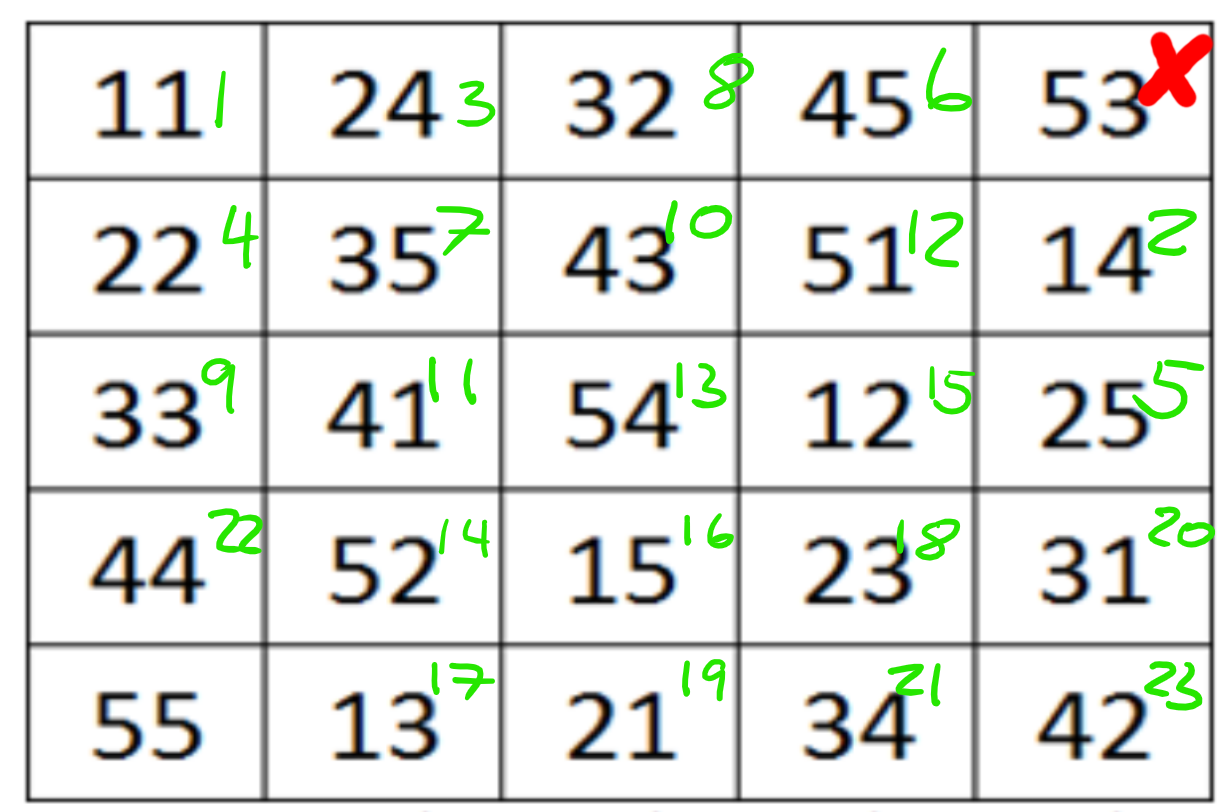 Room 53 is crossed out because its treasure is destroyed by entering room 14.

There may be a way to get at least one more, but it's impossible to get all the treasure, because:

You can never move to a room in the same time (with the current numbering), so at least one of the places must be accessed at in row 2 before it is accessed in row 1, meaning that at least that treasure isn't available.

The maximum number is

23. It's pretty easy to find an example of a solution with 23 moves, and others have already shown those.

It's impossible to get any more than that, because

there will always be at least one square left over at the beginning of the journey, and at least another one at the end.

To show why this is, consider the possible moves. First, let's call two squares connected, if it's possible to move between them. Then,

you must always pick a square that is the topmost unvisited one in its column in order to not destroy a treasure.

Regardless of which of the top row squares you choose as your starting point, the next one will destroy a treasure: there are no connections between any of the squares in the top row, and neither is any of the top row squares connected to the square just below it. This means that for the second square, you have to pick one that is not the topmost unvisited square in its column, and at least one treasure will be destroyed.

If we managed to get all the remaining squares, the next-to-last square would need to be the square just above the final one, or another square in the bottom row. Again, no matter which bottom row square we choose as the final one, no such connection exists.

Therefore, it is impossible to improve on this result.

Bass's answer gave the initial outline of the proof of maximality, but missed a crucial point:

A solution of length 24 may be possible if we visit the room where the treasure was destroyed as the penultimate step.

leave only the treasure in room 45 destroyed, and allow recovering all 24 remaining treasures.

Unfortunately, before finding an elegant proof, I resorted to a brute force search program which chooses one of the top row as the treasure to be destroyed by the first 2 moves, and then

sets this as the room to be visited 24th, and the treasure below it as either first or second.

All other decisions by the brute force search are restricted to the up to 5 "available" rooms which still contain treasure and will not cause other treasure to be destroyed (and which link to the adjacent rooms in the sequence according to the rules).

The result was that

plenty of paths of length 24 were found according to the restrictions, but none of them allowed travel to the final non-visited room.

I'd noticed before switching to a brute-force solution that:

In fact more choices are "forced", so if treasure 45 is chosen to be destroyed near the start then one of the following is forced:

As the brute-force search worked forwards, it instead found that

In addition, the not visited room was always

one of the two rooms on the bottom row which are neither reachable from the room in which the treasure was destroyed, nor in the same "place" as it. i.e. 13 and 21 if room 45 was chosen.

the grid appears to have a carefully constructed symmetry... the first digits shift one column to the left from one row to the next, and the second digits shift two columns to the left.

In particular this should mean that

the choice of which treasure on the top row is destroyed will be arbitrary, as any solution that destroys one treasure can be converted to one that destroys a different treasure simply by relabelling the rooms.

Not the answer you're looking for? Browse other questions tagged strategy optimization mazes or ask your own question.

8
Getting Stuck on Purpose
20
1 in, 1 out (The Security to the Party Maze)
18
Can Isaac get an even tan?
3
Monopoly Game Show: Is there a winning strategy?
6
Lights in the Dungeon: Three by Three
7
Lights in the Dungeon: Five by Five
17
HAISU: Nought and Crosses
11
Oriental House: An original grid-deduction challenge
8
Ten users, three lights but it's a chatroom
12
Can you catch the thief?