This is a continuation of the story started here.

It's been a crazy few weeks since you first deciphered Sam Smitherson's letter asking to meet at the Powell's Bookstore Café in Portland. You got to Portland the day he told you to, but being the absent minded type he is, he didn't tell you a specific time! Colorado Carl decided to show up around noon, but Sam wasn't there. When you asked one of the baristas if they had seen someone who matched his description, she pointed you to an empty table and mentioned something about him leaving with a tense man with a dark suit and sunglasses. There were a few pages and a red pen at the table, but Carl scooped everything up before you could get a look at them.

That was a week ago now, and for a while it didn't look like you were getting any closer to finding out what happened to Sam Smitherson. You've been staying in a hotel for the past week, and Carl has spent all his spare time poring over the papers Sam left behind. This morning, though, he didn't join you for breakfast like normal. After convincing the hotel staff to let you into his room, it appears he left in a haste.

You aren't sure if he left on his own or was forcibly taken. The room is a mess, but Carl has always been a bit disorganized, so there's no way of knowing if there was a struggle or not. The only things left behind were two of the sheets that Sam had left at Powell's, hastily stuffed inside one of the pillowcases. The papers are an old, coffee stained map of Powell's City of Books, and a handwritten list of some sort: 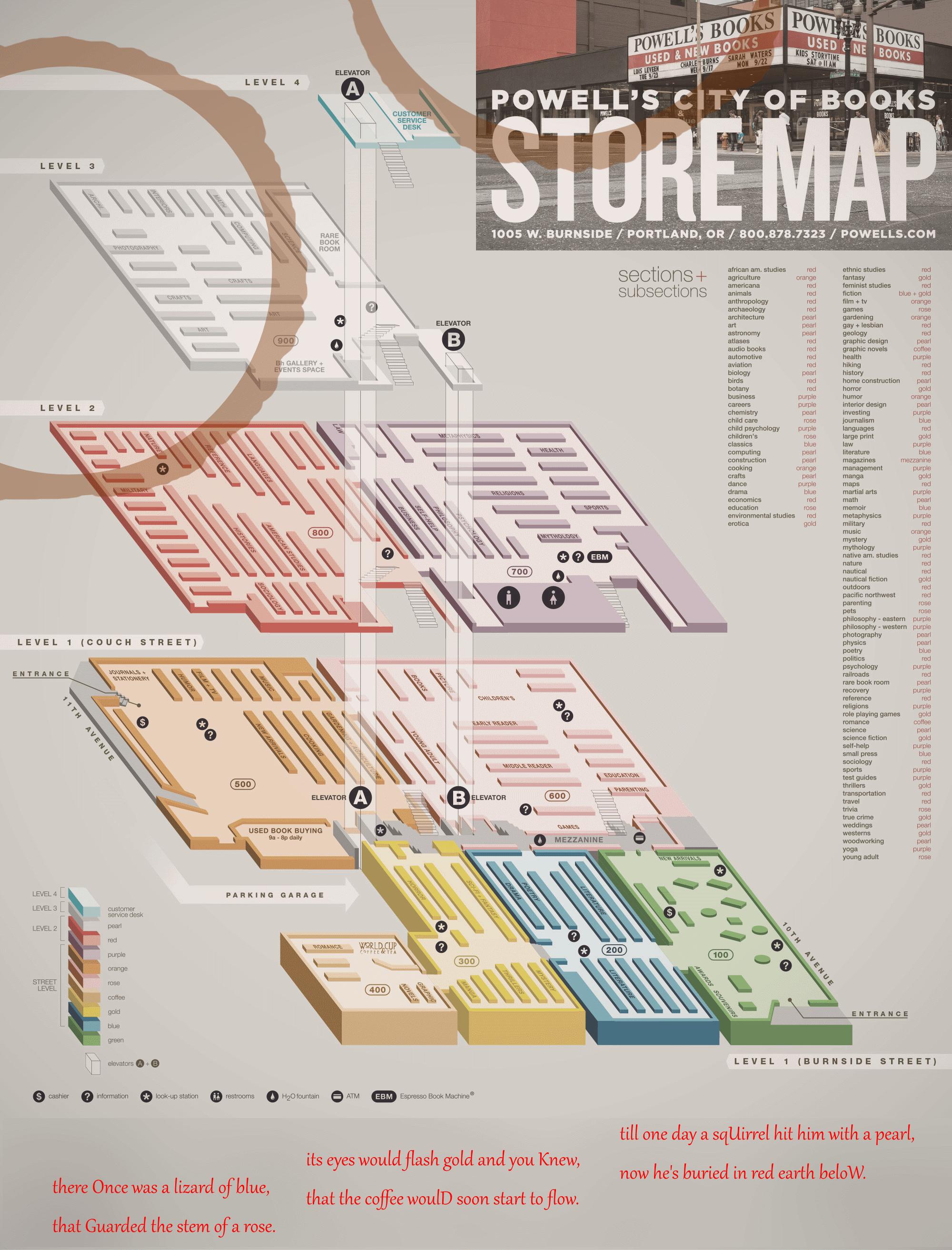 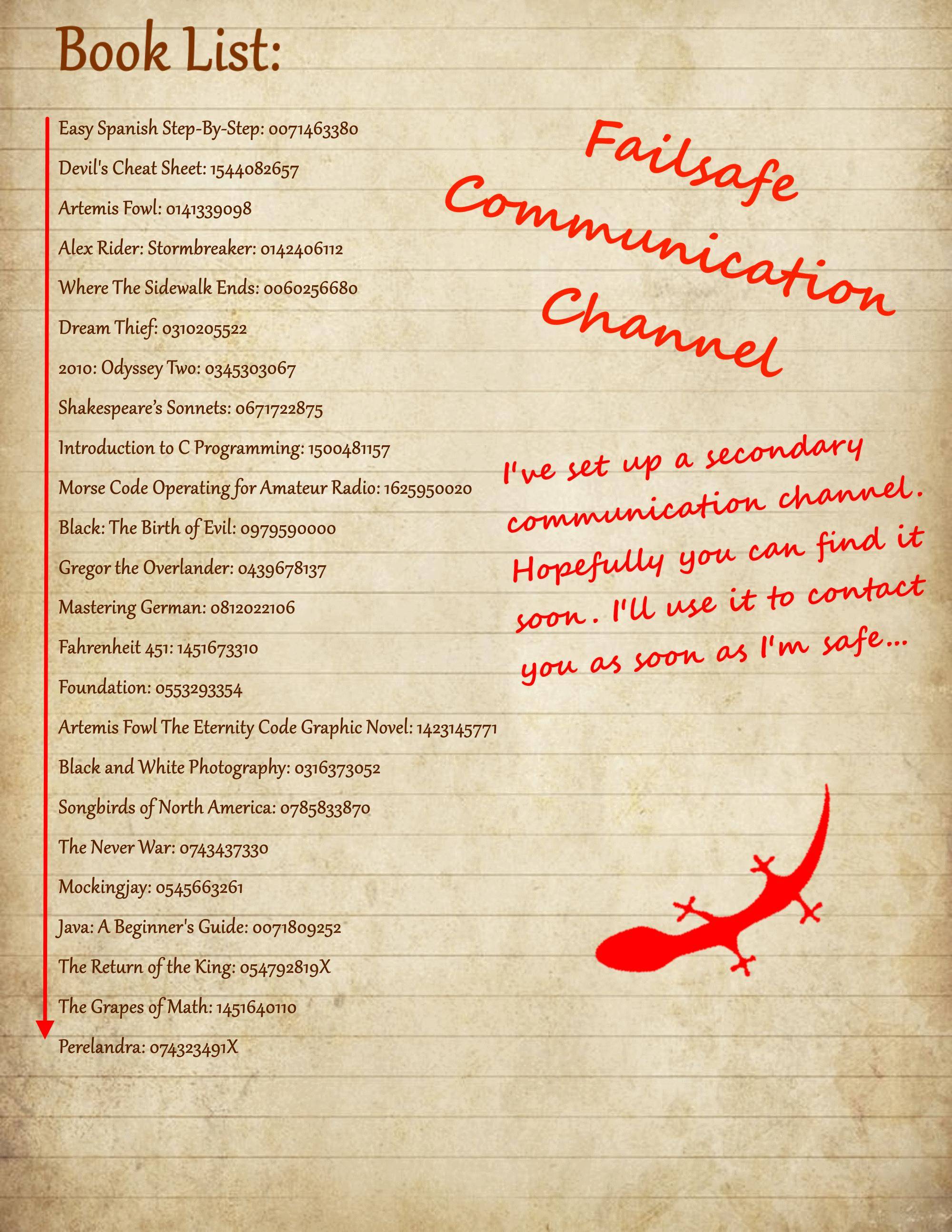 It's now up to you to find out where Sam Smitherson and Colorado Carl are! Best of luck!

Revision 1: Something seemed wrong when I was writing my last hint, and I realized that, somehow, a decent chunk of the information needed for the solution was missing. You should still know when you've found the right way to solve it, but when you get there, just add "PL6g" to your result, and that should clear things up.

Hint 1:
You decide to test the pictures for various invisible inks, and your first test reveals more information, shown in blue. There are some numbers over various rooms on the map, and an extra note scribbled next to the book list.

Hint 2:
After making some headway, you check the papers for any other abnormalities, and find some parts of the list are slightly indented, as if they were scratched on with a pen that had run out of ink. A careful rubbing generated the parts on the list marked in pink. 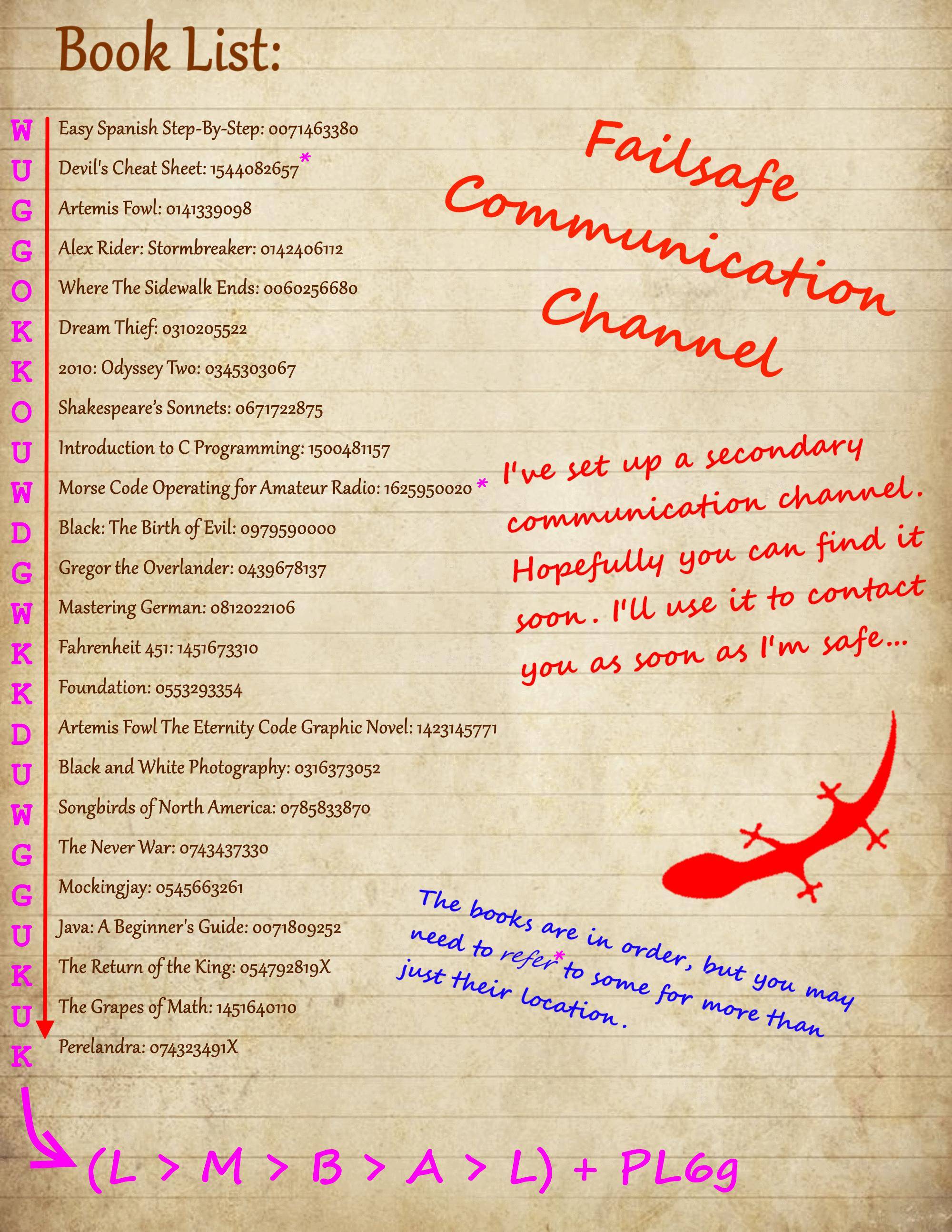 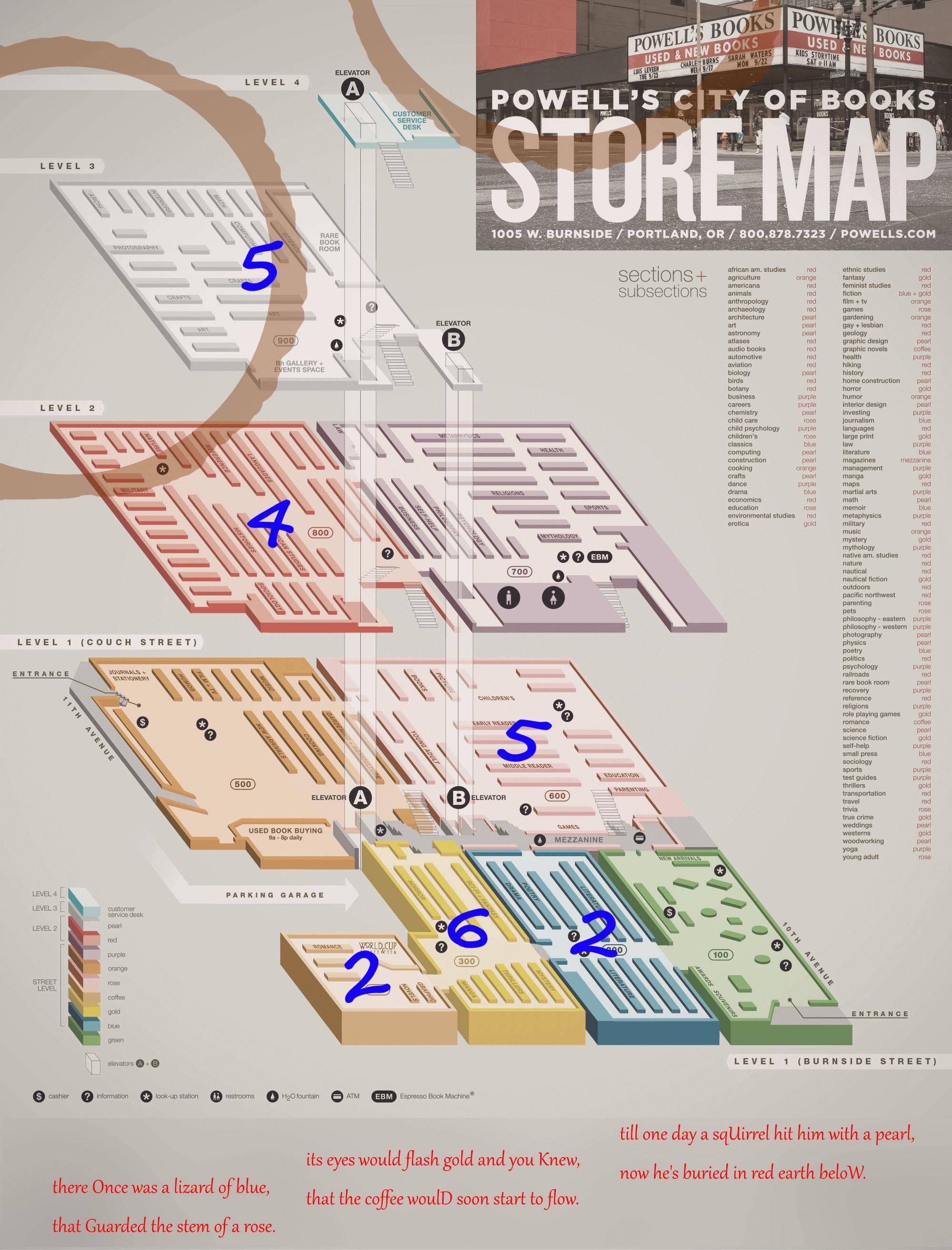 Everything required to solve this puzzle can be found in the images above. Thank you to M Oehm for transcribing the initial pictures. Additional hints will be provided every Wednesday and Saturday as needed

... has a poem at the bottom. Each line has one capital letter that stands out and also the colour of one of the sections in the plan. The first hint has added numbers to these sections:

... is just that: A list of books. The corresponding 10-digit number is the ISBN of that book. (The last digit of the ISBN is a checksum, which can be a "digit" from 0 to 10, where 10 is represented by an X.) The authors are missing from the list, so I've added them, as well as the colour of the section where I think the book could be found.

... also tells us that we need to refer to the reference books about Morse and number bases. The six letters for the sections (D, G, K, O, U and W) are all three signals long,so that we get 24 × 3 = 72 signals. With the hint of the "Devil's Cheat Sheet", we can turn these Morse signals into binary digits: A dot ist zero and a dash is one:

... that we should add PL6g to the decoded text, which leads us to goo.gl/cMPL6g, which appears to be Sam Smitherson's Twitter account. The last message is:

Sam Smitherson‏ @SSmithLLiz Oct 8
Been off grid since what went down in PDX last weekend.
Need help though, so risking it. 19₁₀. 18:00. Wheel. C@L.

The notation 19₁₀ means 19 in base 10, or 19 in decimal or dec 19 for short, which indicates the 19th of December, of course. The notation 18:00 is identifiable easily enough as hour of the meeting.

The meeting point is "Wheel". The letters C@T sound like Cee-at-Ell, or Seattle. The wheel refers to the Great Wheel at Pier 57.

6
Colorado Carl and the Lazurite Lizard - Part One