A seven-sided flat shape of fixed size in which all angles are equal and all sides of the same length, called a regular heptagon, cannot tile a flat plane. The only regular shapes that can are the equilateral triangle, the square, and the regular hexagon.

But if we drop the condition of regularity, there is a nice tiling of the plane using a five-sided shape: a pentagon that has all of its sides the same length (it is equilateral), and which is also a mirror image of itself (it has reflectional symmetry), but which has angles of different sizes (it is not equiangular), namely the Cairo pattern: 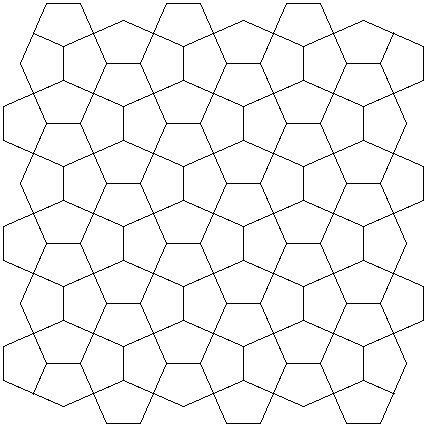 It is also possible to use an irregular hexagon (six sides) that is neither equilateral nor equiangular: 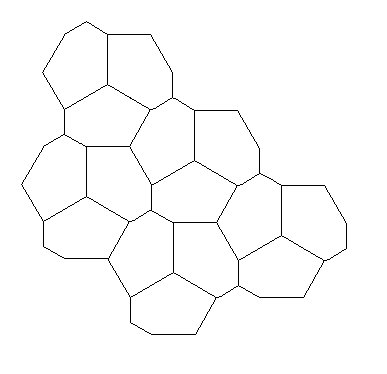 The puzzle is to find a convex equilateral heptagon that permits such a tiling and has reflective symmetry; or to prove that none exist. In other words, we are looking for a shape that

This is not a trick question. Euler-style tilings where the shape is allowed to vary in size are not allowed, not even if you can find a way to distort the following so that the heptagons, while remaining of different sizes, all become similar in shape! 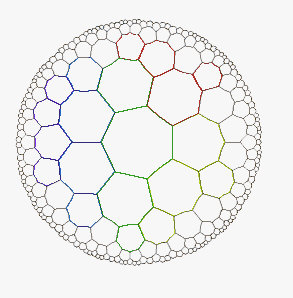 (Note: originally I forgot to include the convexity condition, and M Oehm posted an excellent solution using a heptagon formed from a regular hexagon with a triangular bite taken out of it. This was a correct answer to the question as stated, and deserved the tick, but I have now added the convexity condition with his permission.)

(Further note: for the avoidance of doubt, I am using the word "side" to mean a polygon's edge that meets adjacent edges at each of its ends and does not form part of a single straight line with either of them. In other words it meets each of the two adjacent edges at a corner, where the interior angle at a corner is not 180 degrees. This is just ordinary English usage.)

One possible way is to use ... 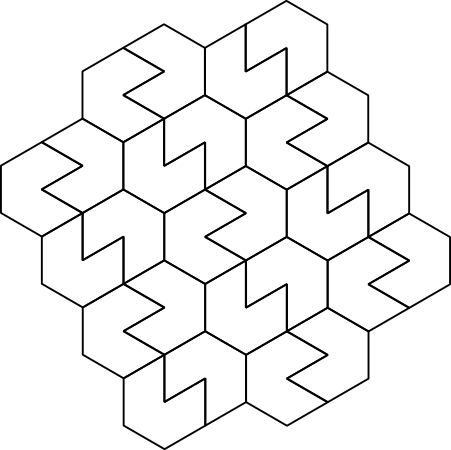 Consider the "mean angle of a tiling" defined as follows. Pick an arbitrary point $O$ in the tiling. For any radius $r>0$, let $C(r)$ be the circle centre $O$, radius $r$. Consider the set $S$ of all points $P$ where the interior angles of 2 or more tiles meet, where $|OP|<r$. What is the mean $M(r)$ of all these interior angles? It is a weighted average of the respective averages over all points in $S$; the weight for $P$ being proportional to the number of angles meeting at $P$. For large $r$, $M(r)\approx M(T)$. The two means might not be exactly equal, because of tiles that straddle $C$ and have at least one vertex within $C(r)$ and at least one outside $C(r)$. But such tiles can be made an arbitrarily small proportional of the total by taking $r$ large enough. Thus $$\lim_{r\to\infty} M(r)=M(T).$$

As shown above, $M(r)$ cannot be made that high using only points where 3 or more tiles meet. This entails points where the interior angles of only 2 tiles meet. At any such point $P$, one of two possibilities occurs.

One possibility is that one of those angles is greater than $\pi$, i.e. it is a reflex angle, which means that the tile containing it is concave.

The other possibility is that both of the angles there are equal to $\pi$. But in that case, $P$ is not a vertex of either of the 2 tiles meeting there. To call $P$ a point where two vertices meet would be to count 2 or more pieces of a single side as separate sides; the "heptagon" would in fact have no more than 6 sides.

Note that it is OK for 3 or more tiles to meet at $P$ and for one of the angles at $P$ to be $\pi$. This would mean that vertices of 2 or more tiles met at $P$ along with some point of another tile which is not a vertex.

I'd like to think that your first image is a hint:

Each set of 4 pentagons in that tiling forms a pretty obvious irregular hexagon. If you remove one of the pentagons that have three outside edges, you get a (non-convex) symmetric heptagon that tiles very nicely.

Here's a low-tech demonstration. The letters show heptagons with the same orientation; I suspect there are other tilings as well. 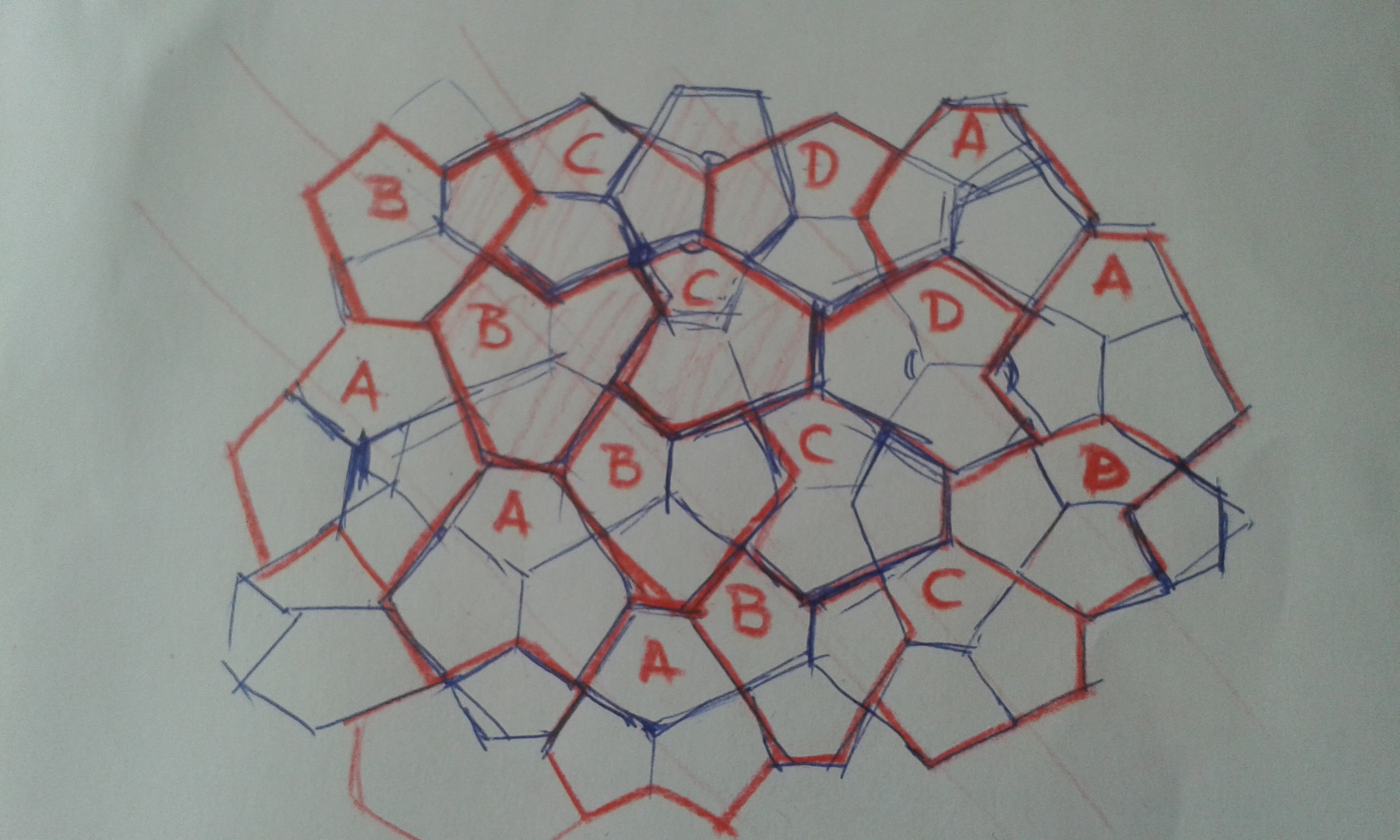 Edit: This answer is now excluded by yet another edit to the question. The revised question explains very wordily that the intended polygons are strictly convex. 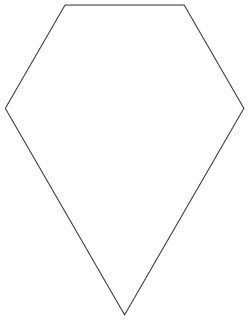 These combine into a somewhat hexagonal unit cell. 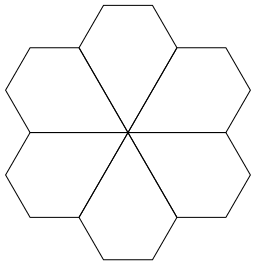 And these tile the plane. 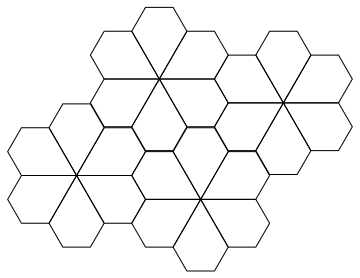 This is kind of cheap but, quoting Wolfram:

So no such tiling exists.

Not the answer you're looking for? Browse other questions tagged tiling or ask your own question.