Battleship Game with only one Aircraft Carrier

Two guys are playing regular battleship game with only one Aircraft Carrier, with dimensions $5\times1$. Their table is regular $10\times10$ Battleship game grid board. 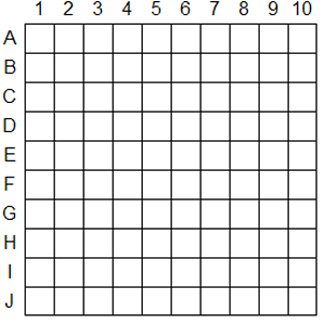 As this variation of Battleship has no other ships, the Aircraft Carrier can always be sunk in...

1.  The 5-cell-long ship is found by 20 shots taken in a scan pattern that leaves no gaps longer than 4 cells and is discontinued after the first hit.

2.  The ship is sunk by 4 to 6 follow-up shots. If the ship remains untouched until the 20th (last) scan shot, only 4 or 5 follow-up shots will be needed because that last scan shot is at the edge.

Here is a scan pattern and the counts of follow-up shots that could ensue from each possible scan hit. Scan shots are ordered to produce the smallest average number of total shots, 13.633, that sink a ship placed randomly in any of its 120 possible positions. 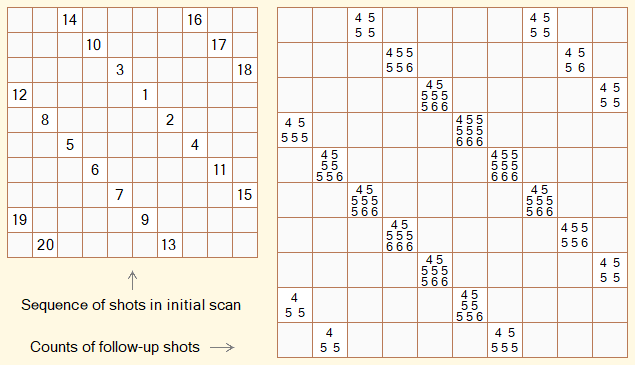 Can a smaller number of shots always be sufficient?

No.   See a neat and clear proof by Miles.

Five scan patterns (and their equivalents) are most efficient. 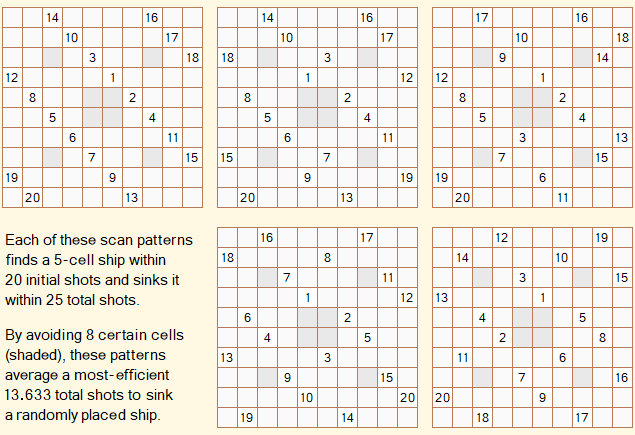 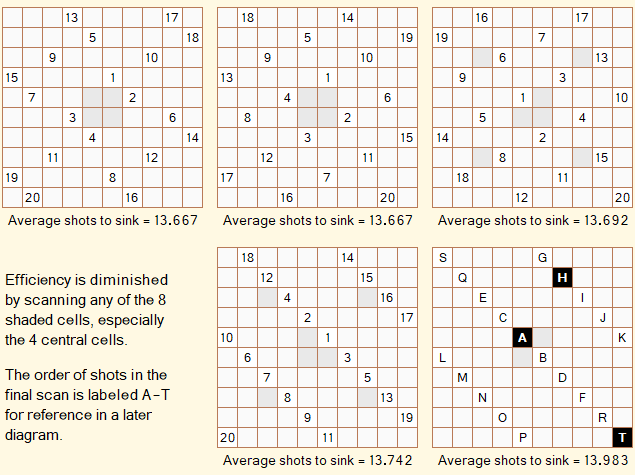 The four central cells can potentially require the most follow-up shots, 7, while other cells require at most 6 follow-ups and edge cells at most 5. The last scan displayed above labels three cells, A, H and T, as examples whose follow-up shots may, as laid out below, be diagrammed and counted. Lowercase letters, “a” through “f,” signify positions and order of follow-up shots that may be needed to determine a ship’s position. Dark cells indicate known or deduced cells of the ship. 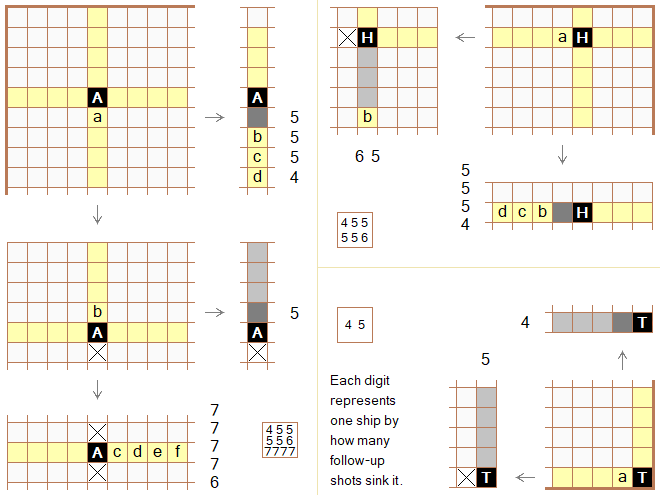 Case studies such as those create a follow-up-shot-count chart that was used to calculate scan efficiencies. 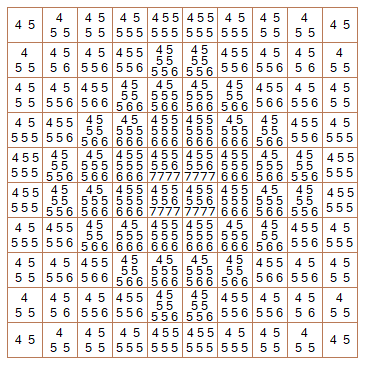 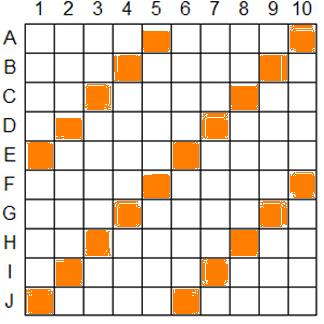 which is in 20, which is 2 per column and therefore minimal.

We can leave one corner to last, in that if we have a hit before this, we need 7 more shots, but have only used at most 18. If we don't hit until the last corner, we have one miss and 4 hits: Total: 25

shots. Here is a proof that no algorithm can achieve a lower maximum number of shots.

Initially, consider a $5 \times 5$ grid. There are 10 possible placements of the ship onto the grid: 5 horizontally, filling each row, and 5 vertically, filling each column. Each grid square touches exactly 2 possible ship placements, one horizontal and one vertical. In order to find the ship, up to 5 shots are required, as each miss can eliminate only two possibilities, with each shot in a unique row and column in order to touch every possible ship location. Once the ship is hit, the orientation of the ship is still unknown (since there are no other shots in the row or column of the "hit"), so in order to sink it, up to 5 additional shots are required: 4 to sink it, plus an additional possible miss if we guess the wrong direction initially.

Now consider a $10 \times 10$ grid. We can restrict the placement of the ship so that it lies entirely in a single quadrant, and doesn't cross one of the center lines of the grid—in other words, we repeat the $5 \times 5$ case once in each dimension, so that there are 40 possible ship locations, and each square still touches exactly 2 possible ship locations. Even with the restricted ship placement, an optimal algorithm must spend up to 20 shots to guarantee that it hits the ship once, and once it does, as with the $5 \times 5$ grid, it must spend up to 5 shots to sink it. Because 24 shots is insufficient to guarantee sinking the ship when we restrict the ship placement in this way, it's also insufficient if the ship could be placed anywhere else on the grid, meaning that algorithms that guarantee that the ship is sunk in 25 moves or less are optimal.

This also applies for other positioning along row J or if the battleship is last discovered to be in column 6. 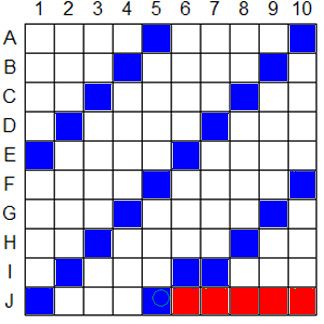 58
Left coin, right coin, last coin?
36
Titanic Tic-Tac-Toe
21
Titanicker Tic-Tac-Toe
22
Even and Odd game
16
5 people each have 5 equal cards
14
Tic-Tac-Toe Without a Predefined Board
7
Magic: the Gathering – The end of time
10
Reverse dots and boxes – Guess the last move
4
Even and odd game variant
6
The Novice Chess Team that Won Every Match of the Season