I've been an amateur puzzle maker for a long time. I've never really found an audience and someone suggested that I check this place out. So my puzzles are kinda ARG style. Let's see if you can figure out this one and uh please leave feedback below as well heheh. All I can say is that the answer will be clearly stated.

I'm gonna spice up the deal with the first person getting this getting a steam game out of a couple choices! 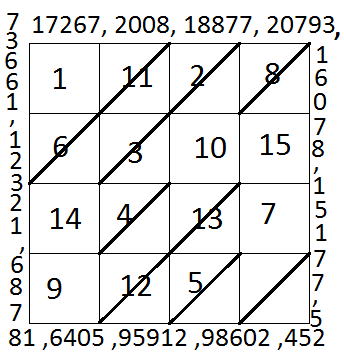 As you might be able to see, there are 3 components to this, separate them.

The spiralling numbers are for aesthetic but the crossed out boxes are not The numbers in the 4 by 4 grid follow a pattern and the number on the bottom right wouldn't be 16 The pattern for the 4 by 4 square is indeed 1 being one space away from 2, 2 being 2 spaces away from 3. Etc. Wouldn't it be fun to generalize the problem? The playfair square goes left to right, top to bottom

Update, but still not even a partial answer, I'm afraid. I'm just thinking aloud and throw out some ideas.

What is the missing number?

AstroMax has found the actual pattern: the number n comes n places after the previous number, n − 1. This pattern uases the rows as lines and it wraps when the bottom right is reached.

This pattern can be continued until a number is placed in the last cell, which is 31. The next step would place a 32 in the same box, and by now, every cell has exactly two numbers: 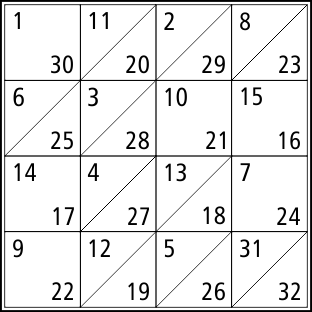 The pattern can be continued infinitely, of course.

What is the meaning of the diagonal bars?

There are sixteen cells overall and ten of them are divided by a diagonal bar. That makes six full cells and 20 half-cells. That's 26 cells in total, which conveniently is the number of English letters. Hmm.

My guess was that each cell referred to a letter. Meanwhile, the OP has stated that the grid is a Playfair square. Typically, Playfair uses a 5×5 grid for the 26 english letters. The excess letter is taken care of by rtreating two letters – typically I and J, less frequently U and V – as equal.

Apparently, the present grid combines nine more letters to equal pairs. The hint says that the Playfair grid goes from left to right and from top to bottom. There doesn't seem to be a keyword, so one possibility could be: 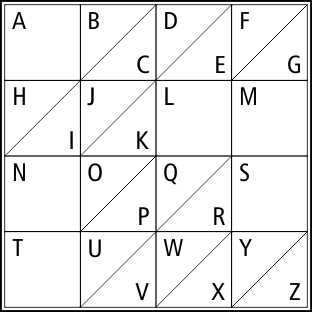 What are the numbers around the perimeter for?

The OP has disclosed that the answer is a word. There are thirteen numbers. The Playfair cipher works with pairs of letters. If there is an odd number of letters, there must be padding. This doesn't really fit, but perhaps "Playfair" doesn't refer to the Playfair cipher, only to the practice of pairing letters.

Continuing the pattern above, so that all of the thirteen numbers are assigned a cell, we get:

The numbers after the arrows are the cell numbers, starting with 1, 2, 3, and 4 from left to right in the top row and ending with 16 in the bottom right. The letters correspond to the scheme I've posted above, which isn't established at all. That result doesn't look promising. There is a good share of vowels, however, so maybe we should build an anagram? Nah, that would be devious.

Using the hint given which suggests there is three parts to the puzzle, a potential answer to the one part may be.

24. In the box if you start at #1 counting in order (ie 1,2,3,4,5 etc.) towards the right, then continuing counting on the rows below, a pattern seems to emerge. Starting at 1 the number 2 is two boxes away (not counting the box you start on). If you count from 2 to 3 the number 3 three is three boxes away. From 3 to 4 four boxes away and so on. This pattern continues all the way up to 15.

If we follow this pattern counting in order, the amount of boxes away we are from the previous numbered box, we could conclude that the blank box is 8 boxes away. But as the OP commented the number is higher than 16. If the numbers cannot be repeated then you may guess 24. if you count past the blank box as to not repeat the number 8 you would get 24. As M Oehm has uncovered, 31 is much better suited to complete the pattern rather than 24.

could possibly be decrypted into a key. The OP mentions playfair in previous comments so a key would prove of useful for a playfair type encryption. 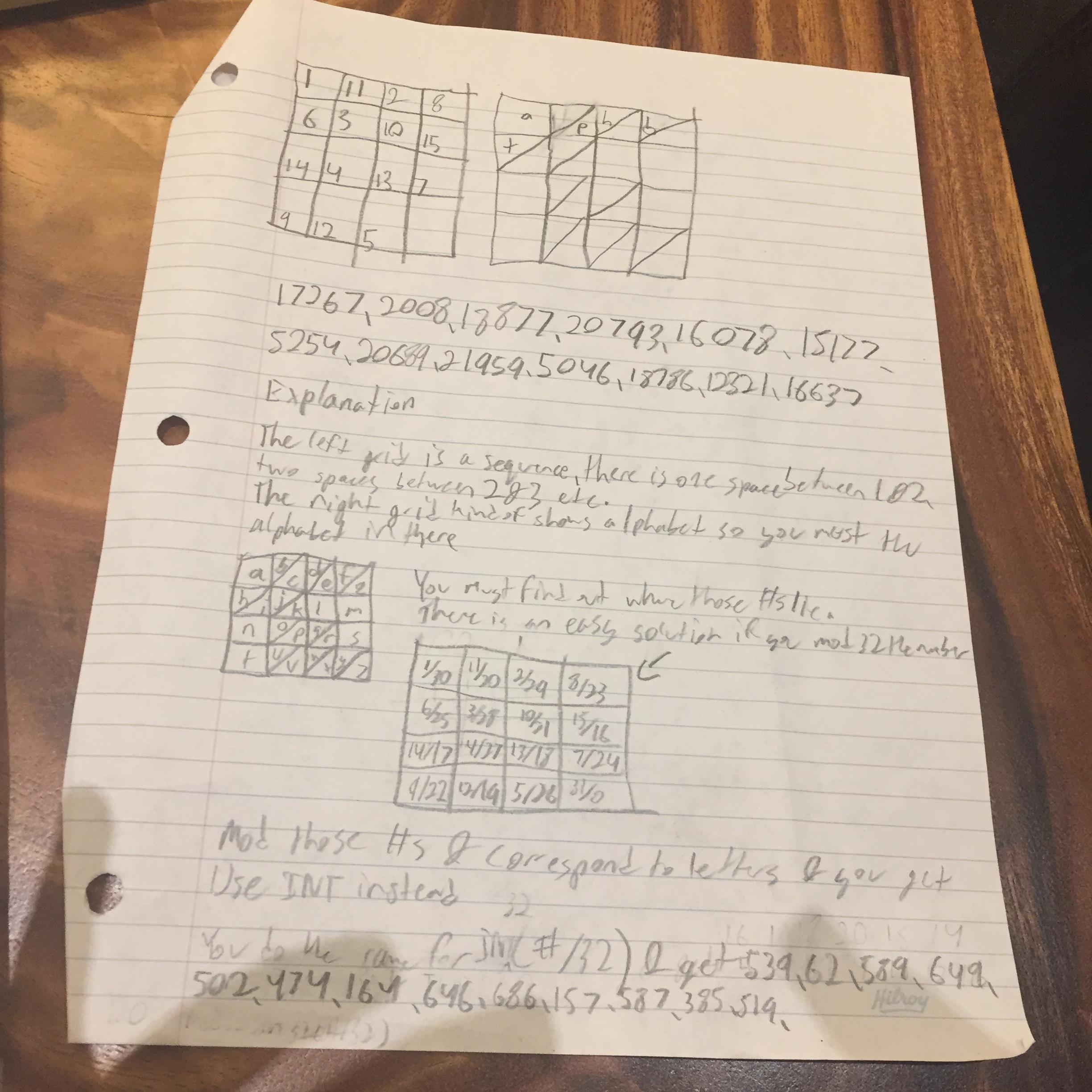 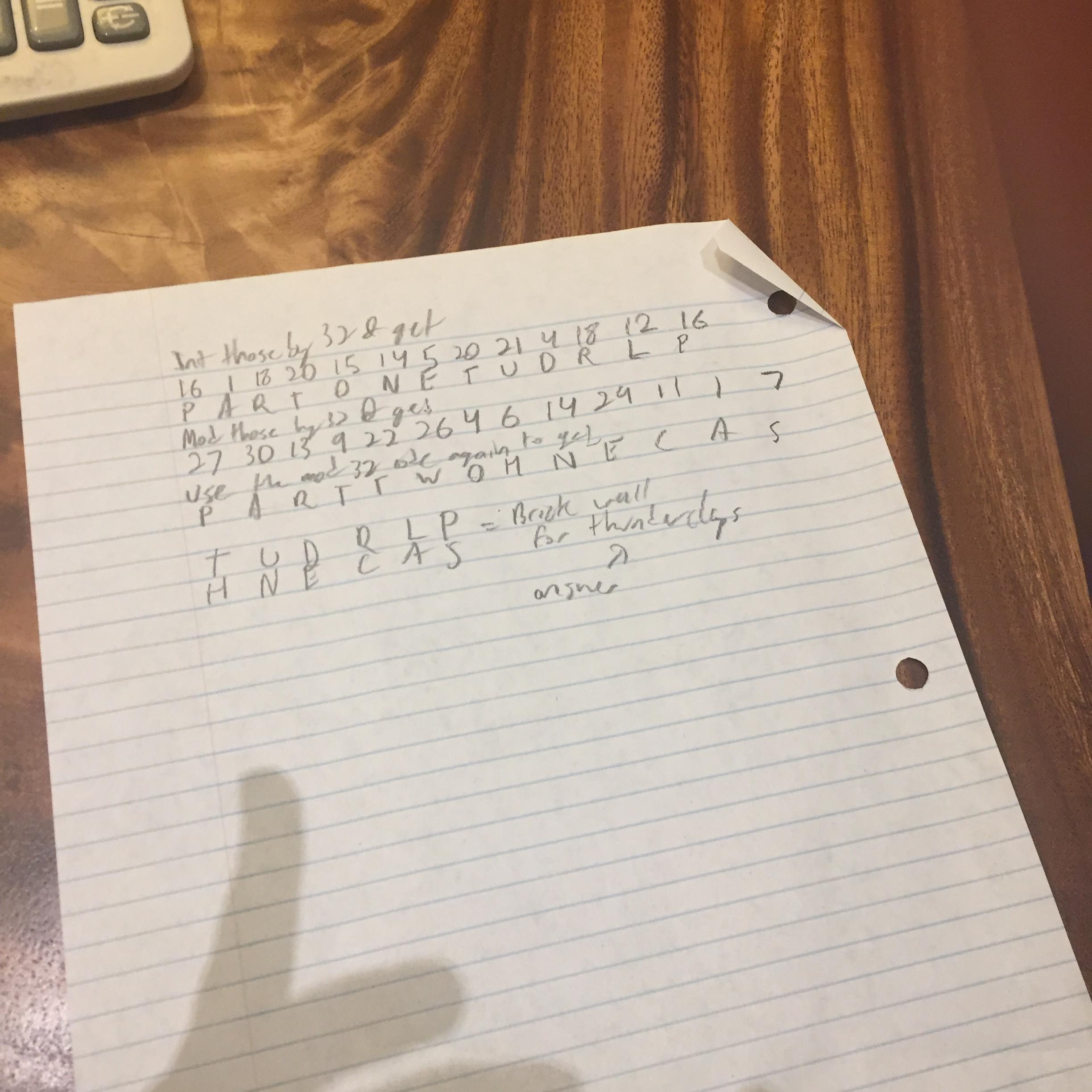 Uh I'm sorry guys. All I wanted was advice I guess I should just not bother with making puzzles. I never found an audience and everyone seems to hate them....

the box has the numbers 1-15 without repeating. 16 would complete the box while keeping the sequential pattern. The numbers surrounding the box and the lines inside seem to be just a distraction from the solution.

Not the answer you're looking for? Browse other questions tagged mathematics cipher pattern enigmatic-puzzle puzzle-creation or ask your own question.

5
There's an ARG I've been working on, and I'm stuck on this puzzle
4
The Temple Of Demdarr, God Of Puzzling (Part 1)
8
Complete the magic square!
33
The Alien Message: What does it mean?
2
This is a tough one!
8
Looking for a party puzzle
8
A Mysterious Number Grid
9
Missing number puzzle: how to get this answer?
1
Feedback for puzzle i made up