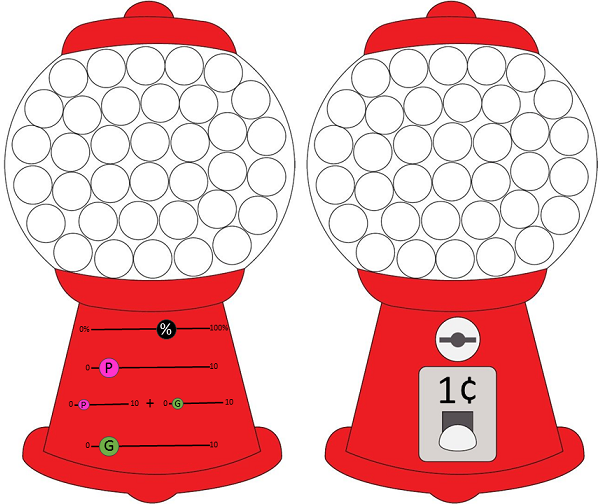 You walk into an antique shop and find an unusual gumball machine. On the back of the gumball machine you can set and lock five dials with the following labels:

A note below the dials reads "Fill machine with any number of pink and green gumballs. 400 gumballs maximum capacity."

On the front of the gumball machine is a slot to place a penny and a dial to turn and receive your treat.

You buy the machine and 1000 gumballs (500 green, 500 pink) and take it home. After a few days of experimenting you've learned the following:

Using the example settings the machine will release:

CAN YOU ANSWER THE FOLLOWING FOUR QUESTIONS?

(I've only spoilered the answer to the first question because the answers to the others were a bit too lengthy.)

(I initially understood the percentage as referring to what percentage of all gumballs left in the machine are pink, but the OP's comment below the question indicates that it actually refers to the percentage of the original number of pink gumballs that are currently left, so I'm going with that interpretation.)

If $N_p$ is 0, presumably the machine will skip the pink-and-green phase, go straight into the green-only phase, continue till all green gumballs are dispensed, and then skip the pink-only phase as well. In this case, the number of rounds (and thus pennies), which we will denote by $R_2$, will either be the largest whole number such that $D_{g2}$ multiplied by that number is less than $N_g$ (sorry, I'm pretty sure there's a name for that, but my maths was a long time ago and I've forgotten it! Let's call it $L$.), or $L+1$. If $N_g$ is a multiple of $D_{g2}$, it will be $L$, and if not then it will be $L+1$.

If $N_g$ is 0, then (if $D_{g1}>0$) it is not entirely clear from the rules what happens: does the machine skip straight to the pink-only phase, or does it dispense the appropriate number of pink gumballs each turn for the pink-and-green phase, even though it cannot accompany them with the appropriate number of green gumballs, until the percentage of pink gumballs is reached? Assuming the former, the number of rounds and thus pennies (which we will denote by $R_3$) can be calculated in the same way as for the case where $N_p$ was 0, replacing all the $g$s with $p$s.

If $N_g$ and $N_p$ are both non-zero, then the machine starts in the pink-and-green phase. It is known that this will terminate when the number of pink gumballs remaining drops below $P$% of $N_p$. As already mentioned, it is not clear from the rules whether it also terminates when the number of green gumballs reaches 0, but we will assume that it does.

The price that you pay for the gumballs has no bearing on the dial-setting strategy. This is because throughout we have been assuming that the customer (or a steady stream of different customers) will keep inserting pennies regardless of how attractive to them the offer of a certain number of gumballs of a certain colour or colours is. Unlike in the real world, the fact that pink gumballs cost you twice as much as green gumballs do has no implications for how you should price them in the machine, because you don't have to worry that the customers won't go for inferior green gumballs offered at the same price as the pink ones, and you can just go ahead and set the $D_{p2}$ and $D_{g2}$ both to 1, and $P$ to 100, so that the machine enters the green-only phase right from the beginning, followed by the pink-only phase, and only ever dispenses one gumball for a penny; it does not matter what you set $D_{p1}$ and $D_{g1}$ to since these dials will never come into play. (This must be the strategy that maximises your revenue, since each turn must dispense at least one gumball, so there is no room for improvement.)

Similarly, for the least revenue, you need to maximise the number of gumballs released every turn, and if (as shown in the illustration) the dials governing the number of gumballs released all have the same maximum, then the way to ensure the most gumballs are released per turn is to have the machine stay in the pink-and-green phase throughout, so that you get the maximum number of each of two colours instead of the maximum number of just one, and so you must set $P$ to 0 and $D_{p1}$ and $D_{g1}$ both to their maximum possible values. (It does not matter what you set $D_{g2}$ and $D_{p2}$ to.)

I wrote a SQL function to answer part 2 of the question. Try it here.

It's obviously not gonna find the answer to 3 and 4, but it's an accurate answer to 2.

NB: To run the function, simply replace the numbers in the field on the right with the appropriate values, then press "Run SQL."

To run it, here's the query:

A JavaScript calculator for question 2:

Not the answer you're looking for? Browse other questions tagged mathematics logical-deduction calculation-puzzle or ask your own question.