Colorado Carl and the Lazurite Lizard - Part One

You are the assistant to the famed Archeologist Carl Carlson, better known as Colorado Carl! It's been a few years since you've had an interesting or (more importantly) profitable find. However, you think you may be in for your next big break.

Today in the mail, amongst the junk advertisements, adoring fan mail, and late bill notices, Carl found a postcard from his old college buddy Sam Smitherson. While they've tried to keep in touch over the years, and Sam has played an important role in previous expeditions, he now works for a shadowy government organization and is often hard to get a hold of. While you're glad to hear from him, the writing leaves you and Carl more concerned than you had been before.

The front of the postcard has a picture of a cathedral you don't recognize and an interesting green border: 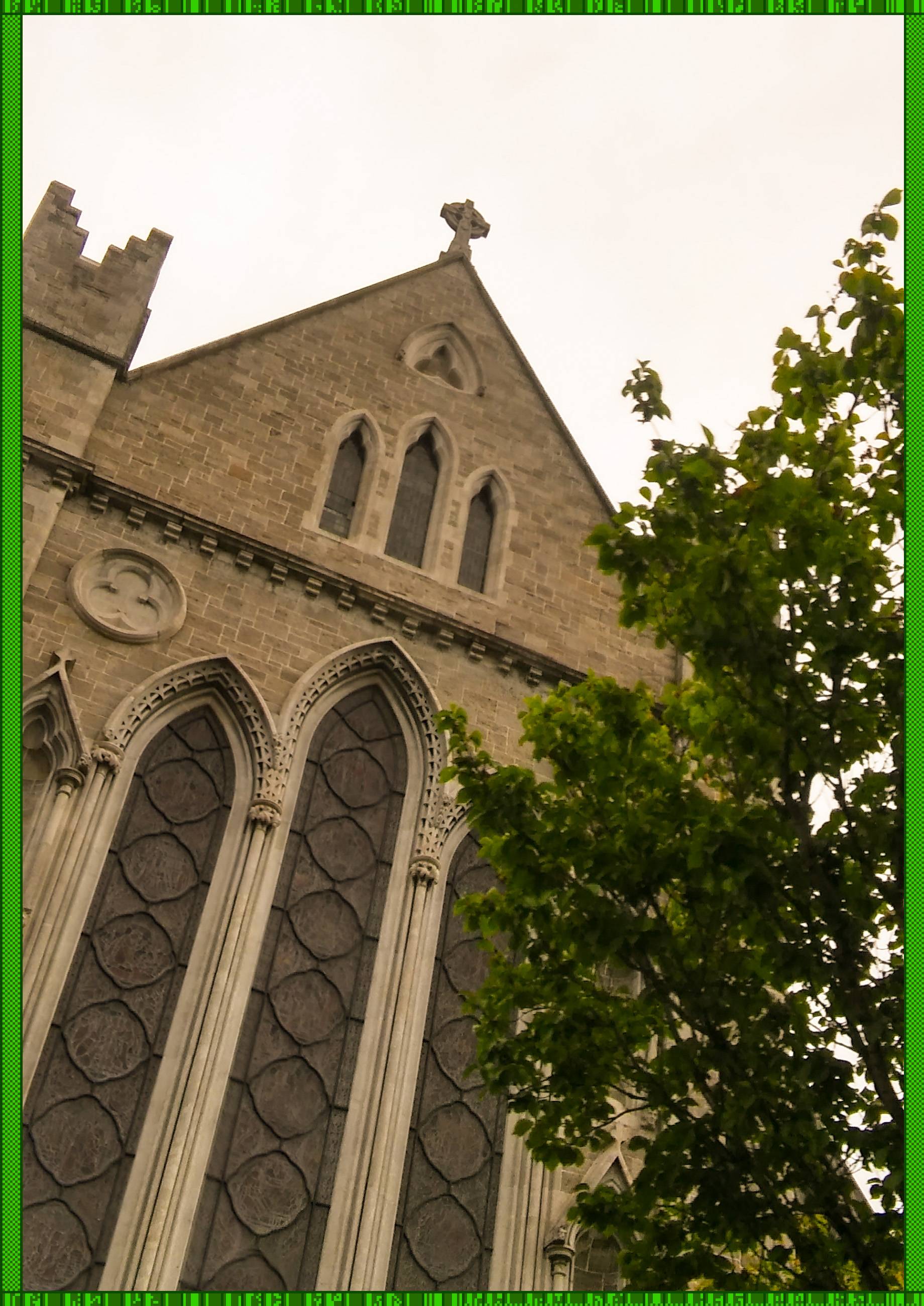 The back of the postcard has a brief message from Sam. He blurred out his address before showing you - even though you've worked together for years, he's still fairly paranoid about his private life: 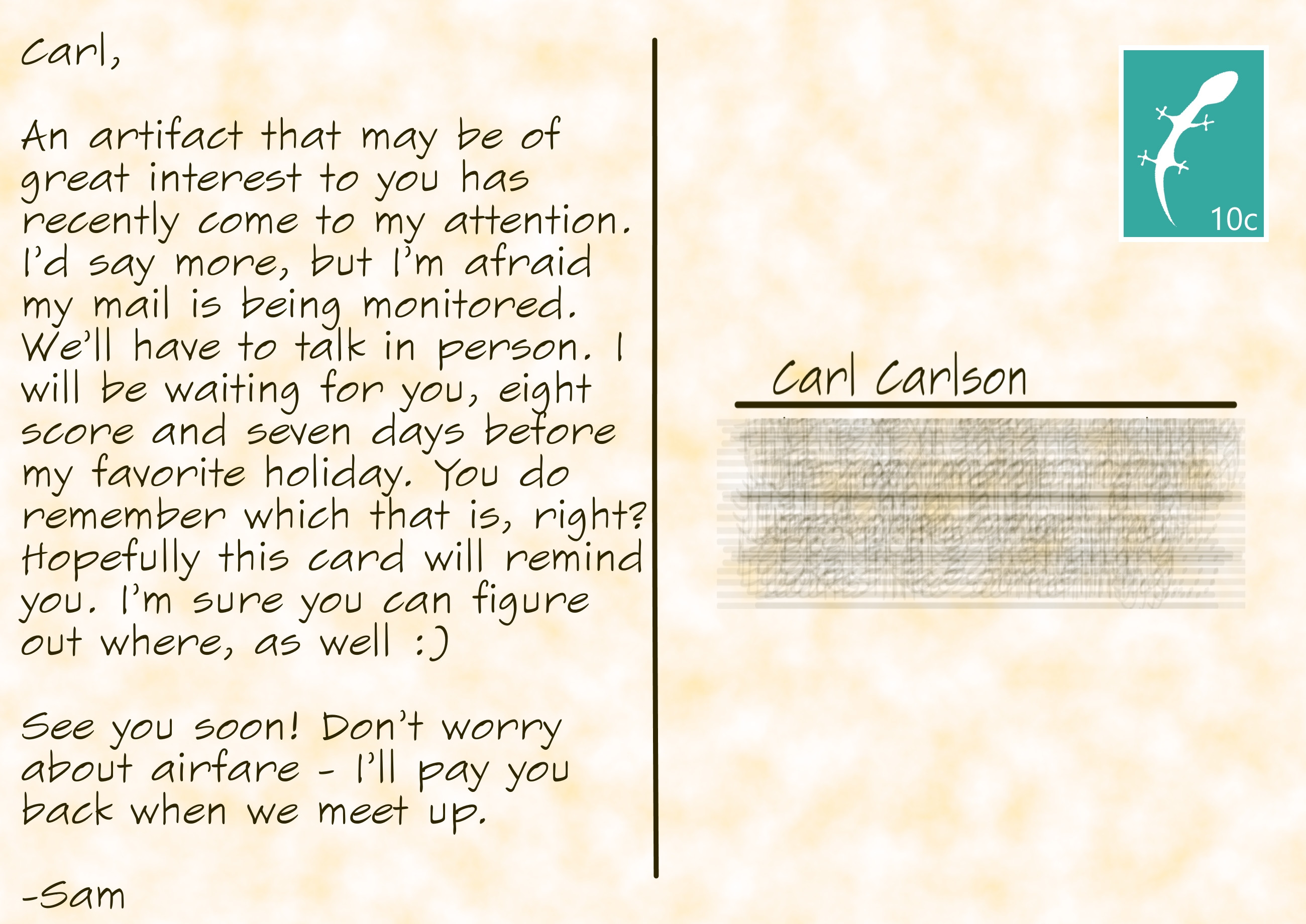 Carl is concerned about Sam, but unfortunately is at a loss when it comes to figuring out Sam's message. He's asked you to take a crack at decoding the postcard. Your job is to find out when and where Sam wants to meet. Good luck!

Edit:
Congrats to Gareth McCaughan for solving this so quickly! Keep an eye out for part two of Colorado Carl and the Lazurite Lizard, coming on October 1st.

Part Two is out now! Find it here!

The patterns at the top and bottom

consist of 46 blocks (at each edge) of 5 rows of 7 bits. Taking dark=0 and light=1, these are readily intrepretable as ASCII characters.

If my hand-decoding (it seemed like marginally less effort than writing a program to pull them out of the image) is correct then here's what they say:

where I should explain that

I have divided each edge into two sets of 23 blocks; each group of 5 characters is one block; slashes are just to indicate block divisions; spaces are literal space characters; # means not a literal hash character but a carriage return (character 13); and U is a literal U but I think it's actually serving as padding or corruption -- it's the pattern 1010101 that you can see a lot of along the bottom.

The observant reader will immediately notice that

each block of 23 has the form 00 00 00 N#000 00 00 W where 0 indicates digits and N,W indicate actual N or W characters repeated. I will be flabbergasted if these are not map coordinates.

to treat each "single-pixel" row as containing two locations (except that the last has only one) and see where they are. It doesn't look as if the path joining them forms writing or anything like that, so let's just take a look at the places.

land locations in the United States

and one thing that jumps out at me is that

all of them have big letters, visible in the Google Maps satellite images, near them. (At first I thought some didn't, but closer inspection finds such letters near them all.) I've put them in square brackets. For the one saying KS, the actual location given is more or less on top of the K so it may just indicate the letter K. In the order I've put them in above it doesn't seem as if they spell anything, nor do they if I arrange them in the same configuration as on the borders of the card. They do form (without too much moving around, either) an anagram of POWELLS BOOKSTORE CAFE; perhaps that is our place.

Powell's have four shops in Portland, OR; one in nearby Beaverton, OR; and none anywhere else that I know of. I'm not sure any but the main one ("Powell's World of Books") is big enough to have a cafe. So let's suppose we're aiming for that one. (I wondered briefly whether the picture on the card was of a church in Portland or Beaverton near to the right bookstore, but that doesn't seem to pan out.)

We could still do with some confirmation of where we are going, and with figuring out when. Well, one possibility is to look at

the text of the postcard -- e.g., first and last letters of the sentences or something. I haven't so far found anything hidden there, though.

Another conspicuous thing is

that wording "eight score and seven", which is surely a deliberate reference to the Gettysburg Address. The date on which that was given, November 19, doesn't seem to be a national holiday in the US (though it is e.g. International Men's Day); in some states Lincoln's birthday (February 12) is a holiday, and in the US as a whole Lincoln is commemorated together with Washington on Presidents' Day (third Monday in February; in 2018 this will be the 19th). But these all lead to dates that are either in the past or too far in the future to be plausible (surely Sam wants to meet up quite soon).

what holidays there are that lie a little more than 167 days in the future. It seems like we want ones celebrated in the US. Well, St Patrick's Day (which I'm not sure is a holiday anywhere, but is quite widely celebrated) is on 2018-03-17 which would give us Sunday 2017-10-01 -- perhaps the picture on the card is of a St Patrick's church or cathedral? It looks like one bit of St Patrick's Cathedral in Dublin -- see e.g. at the left of this image, enough so for me to be pretty sure this is the intended meaning, but it doesn't seem to me like the glass in the window quite matches: in every recent picture I can find of St Patrick's, that window has horizontally-oriented rectangular panes. But perhaps they are a recent addition and the picture on the card is an old one? Perhaps the picture on the card is of the transept opposite to the one whose end is visible in that photo? In any case, one can see a window with the right sort of structure at about 0m22s in this YouTube video of St Patrick's.

So, so far, I reckon

Carl should probably meet Sam in the cafe at Powell's City of Books in Portland, OR. He might try Sunday 2017-10-01 which is 167 days before St Patrick's Day, but the reasoning behind this is a bit sketchy. I haven't seen anything to indicate what time of day.

Things I'm not happy about yet:

I haven't got very strong evidence of which Powell's. There might be other anagrams of those letters, too. I am not certain that the picture is really of St Patrick's Cathedral. There's nothing indicating when in the day Carl should meet Sam. (Perhaps that's a good thing. If Sam's going to be there all day, Carl will have time to check all the Powell's stores.)

11
Lights in the Dungeon: Hooty and the Message
17
A death at a restaurant
12
The shrink and his patient (Part 1)
6
The ancient Japanese runes
7
Help me find my friend Bill
8
A Game Of Cat And Mouse: Part 1
6
Colorado Carl and the Lazurite Lizard - Part Two
4
Finding Rogue Kitty
23
Charlie goes on vacation
18
Secret message in a birthday email