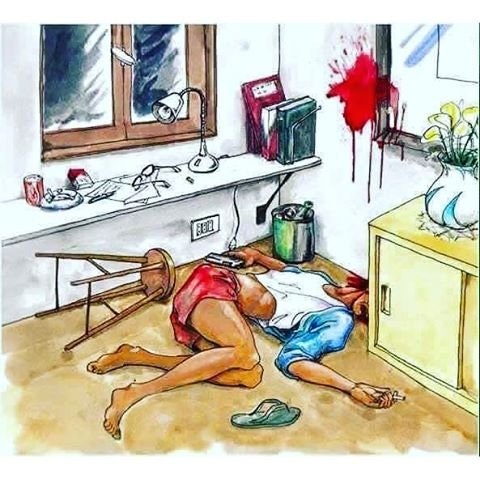 Disclaimer: I didn't create this one. I don't know the original source too.

What happened my dear Watson.

The person was sitting at the table. Someone came from the left side, took the shot. The bullet exited the victim on the right side, hence the blood on the wall. Then placed the gun on the right hand of the victim.

bonus for the giggles:

Someone should dust for prints: 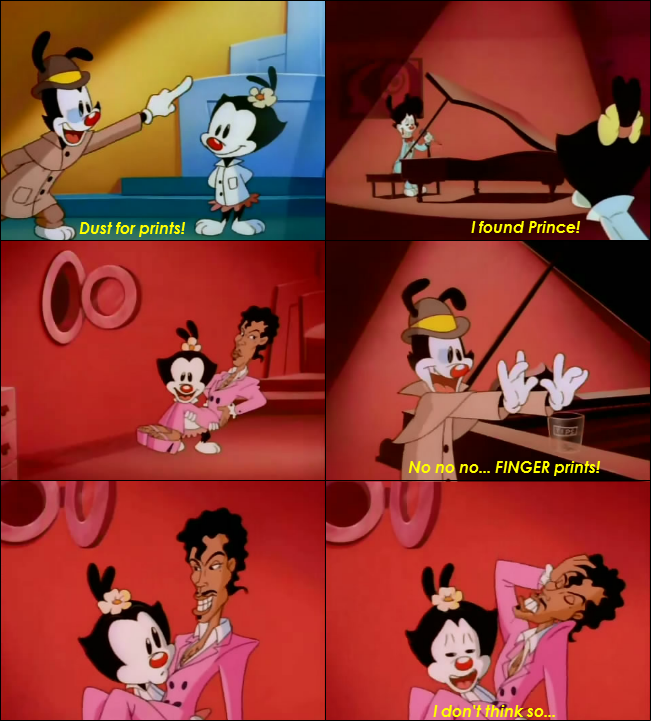 1) On a dark night in a room that was lit only by a table-lamp, the ambi-dextrous victim sat on a stool and was writing a suicide note, which is half-done. On victim's right were placed table-lamp, loaded pistol.
2) He/she tried to take a puff (as a last wish, perhaps, by discontinuing writing the note). He/she was also rehearsing the act of suicide holding the pistol in right hand. While doing so the victim lost balance and fallen to ground. Adding to this the victim's right leg (with a slipper) accidentally got tangled on the electrical wire and thereby removing it from the socket resulting in a pitch dark room.
3) While falling on the ground, the victim tried to clutch/grab any known objects for support (forgetting that already a loaded pistol is in his/her hand) - so as to prevent the fall, but to his/her misfortune the pistol went off wounding him/her on the right and resulting a splash of blood on the wall.

And the resulted scene is as illustrated above (of course on day time!)

the gun is in her right hand and it appears she was sitting on the stool, so if it were a suicide, the shot from her right hand woiuld not have made the blood spatter on the wall on her right side since she would be shooting to the left.

she wrote the suicide note, and being in a moment of pure frustration, kicked over the stool, stood and shot herself on the right side of her head facing away from the table, leaving the blood spatter. The cigarette remained in place due to copious amounts of lipstick acting as a glue.

She is an author. She is currently drafting her story, and she wants to know what it would look like should there be a suicide, so she staged one in her study complete with blood spatter.

An assumption: The picture does not make it clear exactly where the wound is, as the head is largely obscured by the credenza. It is also hard to infer from the blood on the floor, as there may have been pooling. If it was suicide, the right temple fits with the positioning of the gun. If it were murder, presumably the gun would be placed to be consistent with the entry wound, as a gun on the exit wound side would be blindingly obvious, so again, right side. Therefore, we are assuming the wound is in the right temple.

The blood splatter on the wall shows spray that goes up and to the left, as well as having some of the blood on the inside edge of the recess, suggesting that the victim was in the vicinity of the credenza at the time of death. Also, given how thoroughly saturated the splatter is, and that no blood seems to have gotten on nearby objects (notably the books on the desk), the victims head was likely very near the wall. With the gun in her right hand, if this were suicide, she would have had to be facing the wall, which would leave her in a completely different position. To fall in the position she was found in, she would have had to be facing away from the wall - which would have required the gun to be in her left hand. The positioning of the stool is off as well. Ever fall off a stool? The stool will normally land in the same spot as you, with the seat still near your butt. This stool is on the other side of the room, and under a ledge to boot.

The big giveaway is the unlit cigarette. The cig in her hand must be unlit. If she were smoking it as she shot, it would have continued to burn after she fell. As there is no ash under it, this is clearly not the case. As there would be no reason to pick up a cig and then immediately shoot herself, it must have been placed there after the fact.

Based on the positioning of the body, the gun, the stool, and the cig, the scene must have been staged.

She was seated on the stool near the corner where the splatter is currently, looking out what I presume is a window. The assailant approached, shot her in the right temple at close range. The body slumped to the side, with the head first resting on the corner before sliding forward, towards the window. Note that the blood on the sill is a straight smear, and not irregular as the rest of the blood. The murderer then hastily arranged the scene to portray a tragic suicide, first positioning the body, then placing the cigarette in her left hand and the gun in her right. As he positioned the body, he shoved the stool out of the way, giving little thought to its final position. As he staged the gun, he inadvertently pushed the stool under the ledge and unplugged the lamp.

Edit: updating the scenario to account for another detail.

I think it is murder because if the person who commits suicide releases the gun and looser a cigarette, I do not know why he keeps the two objects so hard.

Not the answer you're looking for? Browse other questions tagged visual mystery or ask your own question.