What's the fewest weights you need to balance any weight from 0,5 to 40 pounds, on a modified balance scale

One arm of a weighing scale is twice as long as the other. 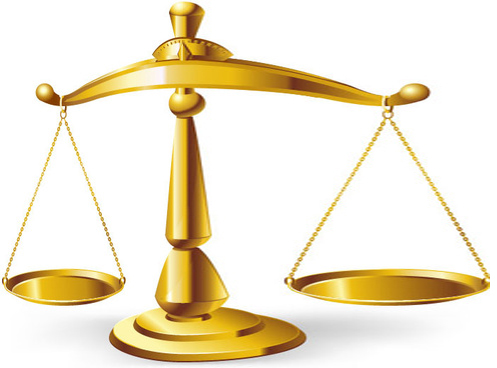 Suppose you want to create a set of weights so that any object weight from 0.5 and its multiples up to 40 pounds can be exactly balanced there by placing a certain combination of these weights onto that scale.

What is the fewest number of weights you need, and what are their weights?

This question is different from the existing one. This one has a twist: the length of the arms and it must be from 0.5 and all its multiples.

As proof that these weights work, here are all possibilities:

I'm not sure this is optimal, but it is at least a generic solution that can be extended to any weight range.

EDIT:
Electric_monk's answer shows that you can use the same number of weights but with a lower maximum weight for the range given in the problem.

EDIT2:
Oray was the first to announce that

6 weights is enough for the given range of object weights.

But I found something similar.

Here is an attempt at a mathematical analysis of the problem. I will consider two versions of the problem, the one as given and the version where the maximum weight $n=80$ half-pounds is allowed to grow to infinity, and we ask how to minimize the asymptotic growth of the minimum number of weights needed.

Now there are $3^k$ choices for the values of the $\epsilon_i$'s, and $2$ choices for $\epsilon_c$, so at first blush any set of weights can weigh at most $2\cdot3^k$ distinct values, i.e. $2\cdot 3^k\ge n$. But this isn't quite right because it is impossible for $\sum_{i=1}^k\epsilon_iw_i$ to equal both $c$ and $-2c$. That is, no matter how the weights are arranged, without the unknown weight they are either unbalanced to the left or to the right, and so there is only one place you can put the unknown weight to have a chance at balancing it. Thus the choice of where to put the unknown weight is not really a choice at all.

So we find that $3^k\ge n$, just as in the case with balanced arms. Unfortunately, this is not a very good bound - for the present case $n=80$ this gives $k\ge 4$, while the best solutions elsewhere on this page find $k=6$ as the best case.

Since each new weight triples the number of possible values in the best case, we should also expect $n=O(3^k)$ (or $k=\log_3n+O(1)$) in the limit. But unlike the classical version of the problem, $\{-1,0,2\}$ does not form a complete set of residues mod 3, so a formula like balanced ternary will not suffice.

The currently accepted answer shows that it is possible to have a solution where $n=5^{k/2}\approx2.23^k$, and we can search among higher integer bases for solutions in the following manner: Choose a base $t$ and number of weights in this base $m$. The efficiency of this coding system will be $n=t^{k/m}$, so we want $t^{1/m}$ to be as large as possible. We pick numbers $x_1,\dots,x_m$ for the weights, and then our system of weights will be $x_1,\dots,x_m,x_1t,\dots,x_mt,\dots,x_1t^i,\dots,x_mt^i,\dots$, stopping when we have reached our target $n$. For such a system to work we must have that every number in the base is reachable using the $x_i$'s, that is $\sum_{i=1}^mx_i\epsilon_i\equiv0,\dots,t-1\pmod t$.

I conjecture that there are an infinite sequence of valid coding systems where $t^{1/m}\to3$, but it gets harder to describe them as $t$ and $m$ grow. The best solution I have found is at $t=7,m=2$, giving asymptotic growth $2.64^k$. There is nothing better at $m=3$, and $m=4$ is already quite hard to search but does not seem to have anything better.

The solutions for $t=7$ and $m=2$ essentially involve $x_1\equiv1,2,4$ and $x_2\equiv 3,5,6$. But this only deals with the "large scale" behavior, getting the necessary flexibility to get all the digits in the middle of a large target number. The actual problem requires that we get all numbers, though, which means in particular making sure that all the small numbers are accessible. For this we will have to break the pattern a bit at the large end (because our algorithm will push errors into the higher digits).

Put the unknown weight on the short arm. Let $c$ be the amount of half-pounds we have sitting on the short arm (or alternatively the number of pounds needed to go on the long arm to balance the scale). At the start this will be the number of half-pounds of the target, but it may be negative if we have too much weight on the long arm. Fix $k$; we have weights for $7^i$ and $5\cdot 7^i$ half-pounds for each $0\le i<k$, as well as two large weights of $7^k$ and $7^k/2$ half-pounds. (Yes, our weights are in half-pounds, and we have one quarter-integer weight. The rules don't say anything about this being disallowed.) Calculate $c\bmod 7$ to determine the use of the smallest weights:

After these placements, we can add the weight on the short arm to $c$ and subtract double what was put on the short arm, and then it will be divisible by $7$ and we can repeat the process with the next higher place. Many of the cases involve either carrying a 1 into the next position (meaning that we made the target weight heavier and so $c$ got larger in the next higher place), or borrowing 1 (meaning we overcompensated and now $c$ has gotten smaller and maybe gone negative).

Since the carries and borrows only push $1$ or $-1$ into the next higher place, we can handle any number for $c$ in the range $0,\dots,3\cdot 7^k-1$; and we can also cover $3\cdot 7^k$ directly by using only the large weights, but the method breaks down at that point.

To summarize: This method can weigh any integer number of half-pounds up to $3\cdot 7^k$ using $2k+2$ weights. In particular, using $k=2$ we can weigh up to $73.5$ pounds in increments of one-half pound using $6$ weights.

Actually, there is some hope to disprove $k=4$, because the bound there is tight - there are $81$ distinct values to hit (including $0$ which you can't avoid hitting by putting nothing on the scale), and $81$ possible ways to arrange 4 weights. This means that every arrangement of weights must occur exactly once for a target weight, so in particular you have to measure the largest amount, 40 pounds, by putting all the weights on the long arm (so the weights sum to $20$ pounds). The 39.5 pound target must involve removing the smallest weight (so the smallest weight is $1/4$ pound), and then putting the smallest weight on the short arm will measure $39+3/8$ pounds, which is not a target. Thus $4$ weights is impossible.

It is much harder to disprove $5$ weights, because we now have a lot of freedom to choose which weights to put where for each measurement. However, we can at least show that no weight can be irrational, or ridiculously large. One characteristic of these type of solutions is that they are part of a family - we can perturb one of the test weights, possibly changing others to compensate, and we will still have a solution. One way to look at this is that the solution is a point in a 5-dimensional space, and we have solutions along a line. But if we had such a thing, then we could change the parameter until one of the weights was $0$, and then we would have a 4-weight solution which we have already shown is impossible.

This argument works generally - any optimal solution cannot be part of a continuous family, because you can use that freedom to eliminate one of the weights.

More precisely, what this shows is that every weight must be a quarter-integer of size no more than 80 pounds, because this is the requirement for the weight to participate in two different targets. (It is unlikely that it is not at least a half-integer or larger than 40 pounds, though, because these weights can only participate on one of the balances, which cuts down their usefulness.)

So, it's a finite problem, and by a computer search I've determined that there are no solutions for $k=5$, although it gets very close - I found the near-solution $1,4,7,32,40$, which hits every target except 27. Thus the solutions on this page with $k=6$ are optimal.

And to round this answer off, I also have the results of a computer search for the best solution with $k=6$ (meaning a solution which can cover the largest contiguous range):

I have found the answer as:

which is also the lowest total weight you can get. There are more than one answer for weights.

I have improved the lowest total weight required to

with the weights of

are enough. You are told that the thing to be weighed is a multiple of 0.5. So e.g. a weight of 8.5 can be recognised as being heavier than 8 but lighter than 9.

Since five weights are almost enough, six weights should cover a much larger range than 0.5 to 40 pounds. Actually,

Computer is checking right now whether there are solutions covering a larger range, but currently I have only checked integer and half pound weights. As another answer has shown, quarter pound weights might go even further. There is a better solution:

Not the complete answer but the idea would be:

Not the answer you're looking for? Browse other questions tagged mathematics weighing or ask your own question.