You've been known to your government to be an expert in decrypting messages for years so you're not really surprised when a man in a black suit knocks on your door one rainy afternoon.

“Good afternoon, your country needs you.”

Much later, somewhere you’ve never been and would never know how to get to – or get out of, for that matter – you’re sitting in front of a grey-haired elderly man with a semi-permanent smile on his face which never seems quite honest.

“Fact is, we know they are using an encryption relying on a code word they change every other week, and while we have been able to intercept all their messages, we’ve never found the keyword to decipher them. But this time, we’ve got close. We’ve observed a suspect for several months, and we are pretty sure he’s the one receiving the keyword every other week, and passing it on to their network. Last night, the suspect was followed when he entered a shabby hotel, and also when he left it only 20min later. We’ve managed to arrange… and incident, which allowed us to go through his things without giving away that he’s followed. The only remarkable thing we discovered was a handwritten crossword-like paper of letters which we successfully copied down. It has presumably been written by the suspect while he was in the hotel, and we are sure it’s the keyword. Unfortunately, we have not at all been able to discover the keyword. And this is where you come into the game. We’ll update you with any intelligence we get, and you may ask us any question you think relevant, but right now, there really isn’t more to go on than this handwritten crossword… Oh, and the analysts of the messages tell me, that it is mathematically required that the keyword consists of at least 5 and at maximum 7 letters, and that all of those need to be unique.”

Can you find the keyword? The paper found with the suspect is shown below.

Your ‘friend’ might give further possible information over the next few days. You may also ask specific questions, if you think that useful, and your friend will answer to the best of his knowledge. 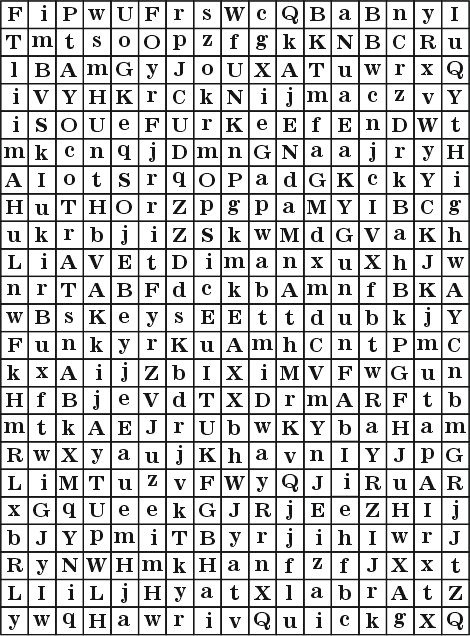 Technical notes and answers to comment-questions

This is only my second attempt making a puzzle here, and tagging it properly is a bit difficult. I can assure you that there is a single answer and that it is clearly the answer (once found). I will add clues over time (if unsolved), and if you have specific questions, please ask them "in story" and you'll receive answers "in story" (when suitable) Those questions might make things easier, but they are not essential.

The image letters typed out as ASCII text (as requested):

Alignment of characters within the boxes:

The original note was handwritten with the characters not all being perfectly aligned in the boxes. (However, it's a cross-hatched paper, so the boxes are accurate.)

First clue. (If you're stuck. You can solve the puzzle without it.)

Second clue. (If you're stuck. You can solve the puzzle without it. This clue is stronger than the first.)

It is not long after, that the same clerk knocks on your door again. "We have just witnessed the suspect handing over the keynote to another man. We think we have positively identified him as the one-eyed spy, who we are trying to nail down for a long time. Anyway, the exchange was quite cleverly done in a Staples store and we nearly have missed it. The spy came in, asked the shop keeper for a packet of colourful pencils and, just after paying, picked up the crossword note our suspect had left in the packing area, and went out. For whatever reason - and to our luck - the one-eyed spy came back 5 minutes later and exchanged - rather angrily - the packet of pencils for another one, before leaving again. We have of course spoken with the shop-keeper. According to him, the spy asked for "a pack of 30 coloured pencils" the first time, which the shopkeeper gave him. The spy returned, because the pack consisted of pencils in red, blue, green, yellow, pink and orange - 5 of each - but he wanted the pack containing 30 different colours."

Once you have a keyword... (Solving the one below will verify your solution.)

Your grey-haired friend crashes into the room and startles you out of your thoughts. "We really have to hurry now. We think we have just intercepted a message send to the one-eyed man. It was stored on one of those cheap label-printers of all things! When we tried to arrest the man, he could escape, but at least he had to leave behind the device. The message was still in memory! It's an endless mess of letters, of course, but we have all confidence in you, that you can turn this into a message..." He hands you a long stripe printed from the label machine (It is a single long piece like in the first image.)

Typed out for copy & paste convenience: "dSmAmcptscAbypOetIoaweorRoaLexdrrevmmiusVtFNnkneeenrsExyieatnXdgxpDKCgrvyxHxxQoxiMHxeXdnaTTruNWtaXieoJJXttn" ( The solution is a message consisting of 12 English words. )

Ok, this is what happened.

In the hotel room,

the first suspect received a long stream of letters in Morse code, and the dimensions of the matrix: 17x23. He arranged the letters in the matrix in order,

and that's how the keynote came to be. The keyword can be obtained by

looking at the positions of all the occurrences of each letter in the matrix. For example, all the E-letters are arranged in the shape of an E. That's why the second suspect needed all those coloured pencils: he had to check the shapes formed by each of the 26 letters. The only letters whose occurrences form the correct shapes are D, E, L, O, S, and V.

The order of these letters (I suppose) is given by

the order of their appearance in the matrix.

The keyword can be used to decode the final message like this:

The letters S-O-L-V-E-D are equally spaced in the text. If you arrange the message in 13 columns, each column will have a full english word delimited by an X. The first column will spell "SOLVED", while the other ones will give the hidden message: "meet at midnight corner parkave twenty seven come armed bring your passport".

As the correct answer has been found, I finish up this puzzle by presenting some solution bitmaps for easier understanding. The solution is identical to the one accepted.

What the hints tell you:

The message was spelled in Morse-code with the numbers specifying the grid. The CASE of the letters can therefore not be of any importance. (Morse code is case insensitive.) The one-eyed spy needed to have more than 6 different colours, so he was quite likely not after vowels. He has more colours than different letters - most likely he wants to colourise the note... which can only mean their position is of importance. (This was a real give-way clue, I guess.) The final message was coded on the label-printer. So the case-sensitive argument from above does not apply. Indeed, one needs to find the upper-case letters of the keyword to get to the final message correctly.

Finding the keyword in the grid (part 1):

Only 6 letters appear in positions outlining the letter themselves 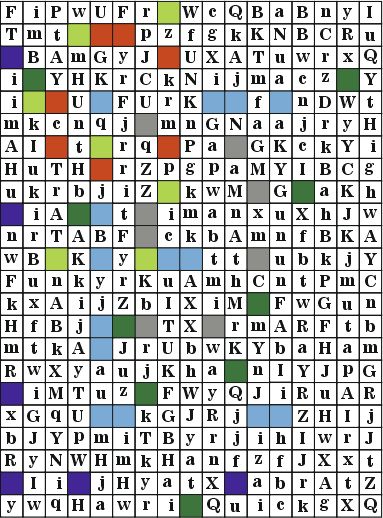 This further leads to the final keyword:

The order of the letters is determined by their appearance (top row) and the word therefore is:

Using the keyword to decipher the message:

Searching (potentially cutting) the label-strip at the upper-case keyword letters and placing the stripes next to each other reveals the message below. Note that the keyword is required, because the message consist of a prime-number of letters and does not form a regular grid. 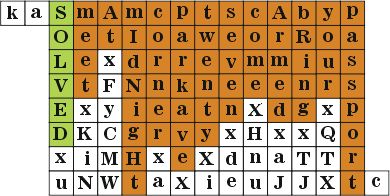 I know that the second encoding is very week. In particular due to the X-delimiters. I suppose one can solve this puzzle "bottom up" by first solving the message. However, this second riddle was only meant as a less blunt cross-check than "The keyword is...". The real puzzle was the first one.

15
Crack the code and become happy
8
Recover the message, the encryption key and the text containing the key
7
You're the NSA, trying to decrypt a message between two friends
11
Lights in the Dungeon: Hooty and the Message
6
A spy and his four messages
12
Find the woman/man of your dreams!
1
Riddle of Markburg
9
Detention in 1997
3
Secret message 01
2
Encoded Morse Code Interception