Amanda, Frank, and Michael are 3 users on Stack Exchange. One of them was serial down-voting. Can you figure out who the culprit is?

Given the evidence, who do you think is the most likely person to be the serial down-voter?

EDIT #1: We seem to have lost some of the original evidence. Good thing it was logged here: https://puzzling.stackexchange.com/revisions/-----/2! Some user, who may or may not be responsible for the serial down-voting, physically damaged the webpage. The only evidence remaining on that page is a pair of scissors.

EDIT #2: The question ID (in the evidence link) is missing and cannot be recovered. Can you figure it out?

The Serial-Downvoter is Duh-Wayne-101. The evidence is a ruse. Amanda, Frank, and Michael represent three of the four links on "Page Not Found" responses on SE. Fortunately, user NarawaGames on Reddit is trying to help us uncover the malicious user. This can be found by clicking the scissors in the edit history.

"I'm here to report a user. I forgot the username, but I have evidence that they're trying to cover up their tracks of serial downvoting.

Evidence #1 ( the malicious user tried to blame other people for serial downvoting ): https://uservoice.meta.stackexchange.com/question/9999983098057903279579235/Amanda-Michael-And-Frank-Are-Serial-Downvoting-On-Stack-Exchange" 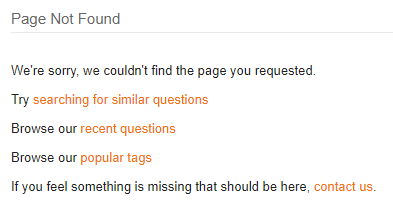 That leaves the "us," the poster. Duh-Wayne has been breaking the links NarawaGames gives us in order to hide his tracks.

An alternate solution is that Amanda is guilty. The only other post on /r/CerealDownvoting specifically uses feminine pronouns to name the downvoter, which would most likely refer to Amanda.

Just clicked 'share', also visible in the URL :-) It got me to a page with scissors and a hole, clicked the scissors and the same ID was visible on the reddit post it redirected to. The links on the reddit post both lead to nowhere. Additionally, the reddit community has another post which leads to a non-existent question on SE it was an accident. A title search doesn't help either. Interestingly, both posts have a URL that contains /question/9999983098057903279579235/ and have host *.meta.stackexchange.com. The first revision says that "Bob the Unstoppable" loves to serially downvote.

Normally you don't get suspended for sockpuppetry, as long as you don't do anything you can't do with just one account. Amanda must have been abusing the system with the socks to be suspended for it. The thing leading to the suspensions might've been the serial downvotes, and her using multiple accounts so that the votes don't get automatically reversed.

Frank's posts being often flagged for spam means that the flags often get declined by mods, because otherwise his IP would've been fed to the "filters", and he would eventually get post-banned. so there may be a serial nonsense-flagger, which might be the serial downvoter too. On the other side, his intention may be to deface Stack Exchange's communities, so he posts spam with multiple IPs (VPN) and accounts and his posts get rightfully flagged as such, and another way to deface the community are the serial downvotes he might be casting.

Michael's account having an increase in downvotes may just be him seeing more downvote-worthy posts recently, or him being the serial downvoter.