The Longest Word Made from Chemical Symbols [closed]

So, as you probably know, each and every element in the Periodic Table has its own unique chemical symbol, which is either one, two, or three letters long. For instance, Oxygen is represented as O and Copper as Cu. So how about combining these symbols to form words?

For instance, Barium and Neodymium would give us Band, or Chlorine-Americium-Phosphorus would give us Clamp. So how long can these words get? I've managed the following examples:

So, community, can you beat my attempts? For clarification, I will allow any word on dictionary.com, including alternate forms of the word (plurals, verb conjugations, etc.). The word must be constructed using only chemical symbols that are recognised according to the Wikipedia page. You may use any symbol as many times as you like in your word.

Victory will go to the person who can give the longest word in characters, not the word made from the most symbols.

One of my favourite words, that's 29 characters long is:

Floccinaucinihilipilification - the estimation of something as being worthless.

It's quite useful for describing what the contestants find on a fair few reality TV programmes! As most of the letters are covered off by only a few elements there's quite a lot of repetition...

Perhaps this is cheating, but my answer (inspired by the Wikipedia page on the longest English words) is

This word is, of course, much shorter than any other words given so far. The reason, though, that it's longer is that it's a yard long.

nonrepresentationalisms (23 characters is the maximum that can be formed) as

There is a word

which is not listed in every dictionary which has 24 characters

Google which led to
http://www.nandor.org/math/chemwords/chemwords.htm

floccinaucinihilipilification
Fl O C C I N Au C I N I H I Li P I Li F I C At I O N
114, the atomic number of Flerovium, is the highest one used so far

I wrote a script (http://pastebin.com/T60RQdXa) that takes a wordlist and outputs the largest word that can be written as a concatenation of chemical symbols. Calling python chemWords.py /usr/share/dict/words yields "NoNRePReSeNTaTiONAl" (19 chars). Calling with a more complete dictionary gives "FlOCCINAuCINIHILiPILiFICAtIONS" (30 chars).

Placing the emphasis on "the longest word made from chemical symbols" - embroidery on a bag! 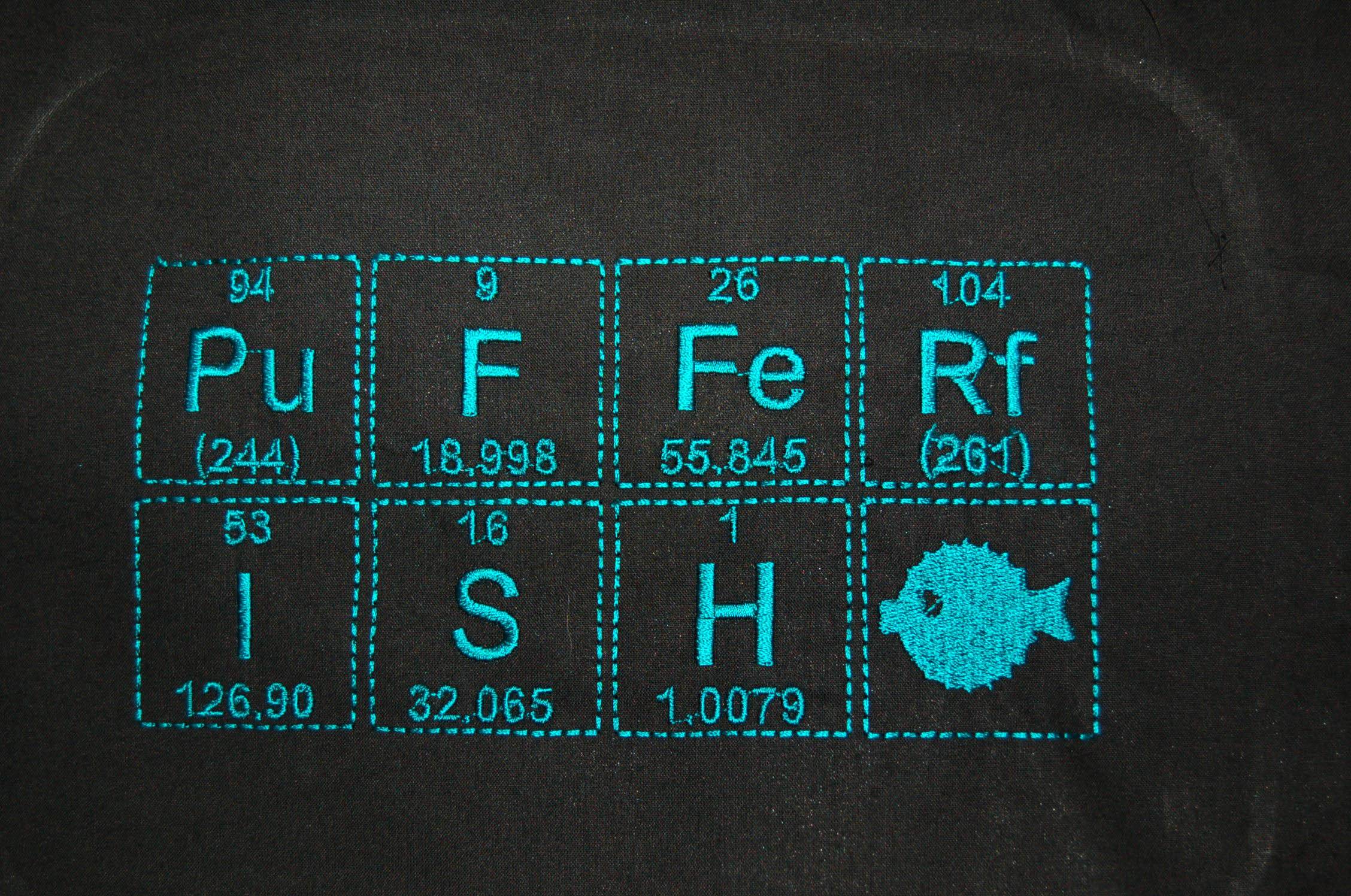 Ben and andrepd already came up with the longest, FlOCCINaUCINIHILiPILiFICAtION (or its plural, FlOCCINaUCINIHILiPILiFICAtIONS)—though note that this word was made possible only recently by IUPAC's adoption in 2012 of "Fl" as the symbol for flerovium. Before 2012, the longest word would have been the 23-letter NONRePReSeNTaTiONAlISmS, as reported by skv.

Incidentally, it's interesting to consider what happens if we restrict ourselves to one- or two-letter element symbols. For one-letter symbols, there is one 14-letter example:

For two-letter symbols, there is the following 18-letter example:

The above examples are taken from the Word Ways article "Elemental Words Revisited". That article (along with a follow-up by Darryl Francis, "King's Moves in the Periodic Table") also describes many other types of words formed from the chemical symbols, such as the longest words whose symbols are in increasing or decreasing order of atomic number, the longest words for each group or period in the periodic table, the words which can be spelled the most different ways, etc.

A pretty common word with 20 characters, in British spelling:

It's certainly not as long as other answers, and the optimal answer appears to have been posted, but I've always liked:

Not the answer you're looking for? Browse other questions tagged word open-ended or ask your own question.

4
A longer chemical word
6
Longest word made from a chemical molecule?