This is targeted as a puzzle hunt puzzle. Any advice on difficulty is appreciated.

Famed adventurer Aldie Wish left on an expedition to find the Golden Scorpion. Nobody in her party has returned, but hopefully the scraps of her diary that were found hide a gem of insight into what happened. 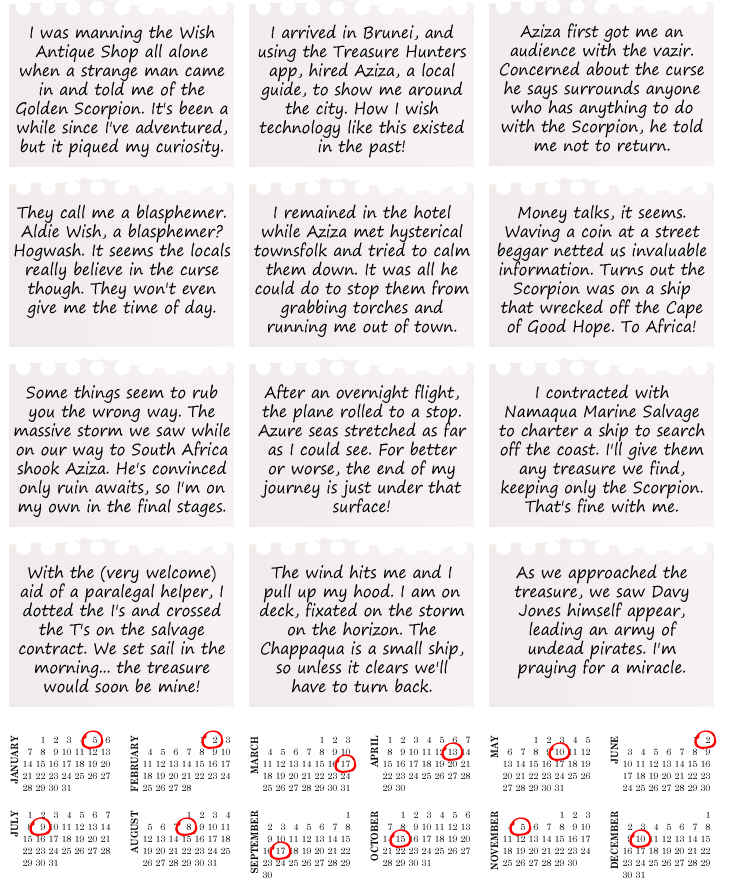 Text version of the journal entries:

I was manning the Wish Antique Shop all alone when a strange man came in and told me of the Golden Scorpion. It's been a while since I've adventured, but it piqued my curiosity.

I arrived in Brunei, and using the Treasure Hunters app, hired Aziza, a local guide, to show me around the city. How I wish technology like this existed in the past!

Aziza first got me an audience with the vazir. Concerned about the curse he says surrounds anyone who has anything to do with the Scorpion, he told me not to return.

They call me a blasphemer. Aldie Wish, a blasphemer? Hogwash. It seems the locals really believe in the curse though. They won't even give me the time of day.

I remained in the hotel while Aziza met hysterical townsfolk and tried to calm them down. It was all he could do to stop them from grabbing torches and running me out of town.

Money talks, it seems. Waving a coin at a street beggar netted us invaluable information. Turns out the Scorpion was on a ship that wrecked off the Cape of Good Hope. To Africa!

Some things seem to rub you the wrong way. The massive storm we saw while on our way to South Africa shook Aziza. He's convinced only ruin awaits, so I'm on my own in the final stages.

After an overnight flight, the plane rolled to a stop. Azure seas stretched as far as I could see. For better or worse, the end of my journey is just under that surface!

I contracted with Namaqua Marine Salvage to charter a ship to search off the coast. I'll give them any treasure we find, keeping only the Scorpion. That's fine with me.

With the (very welcome) aid of a paralegal helper, I dotted the I's and crossed the T's on the salvage contract. We set sail in the morning... the treasure would soon be mine!

The wind hits me and I pull up my hood. I am on deck, fixated on the storm on the horizon. The Chappaqua is a small ship, so unless it clears we'll have to turn back.

As we approached the treasure, we saw Davy Jones himself appear, leading an army of undead pirates. I'm praying for a miracle.

Each journal entry has one piece of information hidden.

Each journal entry, as suggested by the hint,

"birthstones" for one or another month. According to current US conventions we get:
Oct Sep Dec
May Feb Jan
Jul Nov Mar
Aug Apr Jun

The obvious next thing to do is

to turn these into letters via the A1Z26 code, which matches pretty well with encoding information into days-of-the-month (since months have about 26 days each) ... but what we get is OQJ JBE IEQ HMB which doesn't seem promising.

instead use the numbers as letter-indices into the corresponding journal entries, we get 12 letters which turn out to be WATERYGRAVES. Sounds like Aldie's in Davy Jones's locker, though it's not clear when she found time to write all that stuff in her journal...

Comments on dificulty (as requested by OP)

Seems on the easy side for a puzzle hunt, by which I mean somewhere between "too easy" and "fine but would be one of the easier questions, suitable for an early round", perhaps depending on how experienced and ingenious you expect the competitors to be. When I first saw this question, I looked at it for a minute, didn't see anything obvious to do, and moved on. I came back to it, saw the hint, and solved it very quickly -- more or less following the path of least resistance. (Two short detours: first, trying A1Z26 on the numbers; second, I actually tried using the numbers as word indices before I tried them as letter indices.)

there are three places for solving to get stuck. (1) At the very start, solvers might not think to look for hidden things in the journal entries. But I think they would, rather soon. (2) After finding the gemstones, solvers might not figure out what they're for. I put 'em all into Google, and all the results that came back were about birthstones; solvers with internet access will likely do the same. Solvers without internet access might well be completely stuck at this point; I certainly would have been even if someone had told me they were birthstones. (3) After turning stones into months and months into dates (I don't think any solvers will fail to take those steps after getting as far as identifying birthstones), solvers might not think of using the dates as letter indices. I don't know how easy that is to miss, but my guess is that something that took me only a few minutes is unlikely to be taxing for a team of solvers even if they happen to be unluckier or (on the day) stupider than me :-).

Not the answer you're looking for? Browse other questions tagged word enigmatic-puzzle steganography or ask your own question.

108
A hunt for long forgotten treasure ...but beware the pirate's curse!
14
What is special about this trip?
10
Treasure hunt 'round the world! (clue 3)
12
The shrink and his patient (Part 1)
50
Find the treasure before Dargloc does
11
Missed A Connection
8
Ramblings of a drunk man
7
Should Dr. (Indiana) Jones do it? Another Jones Adventure
16
The lengthy and boring adventures of
48
What was I supposed to do?