A puzzle in 140 characters

Like usual, I'll confirm any sub-answers if you find them

Here's the text of the puzzle:

NOTE: If you upvote this, please upvote the puzzle itself too! It took far more effort to make than my solution did.

Turn your head sideways - it reads as "BELOW VISCOUNT", and the rank below Viscount is BARON.

Start with the section left of the arrow. Those are characters from various languages: SE, MA, PHO, and RE. So we interpret the things right of the arrow as flag semaphore to get COLOGNE.

You can rearrange these to get ĆOṈ$ŪMṖŦİVẸĿY. The accents there are Morse code for TORI, and "Tori, consumptively" is a crossword clue (though oddly phrased) for DONUTS.

This says "Unicode firsts", but in a weird way. Take the characters that make up "Unicode", look them up in Unicode, and take the first letters of the official names to get SLASHER.

This is simply a rebus.
Before the minus sign we have SNAIL TACO METRO PEN KEY STOP HATCH. After, we have NAIL COMET OPEN KEYS TOP HAT. Removing the latter from the former gives us S[nail]TA[comet]R[open][keys][tophat]CH, or STARCH.

The middle symbol (that looks like a circled plus sign) means "exclusive or" - basically, overlap and remove anything that's black in both symbols. Do that to the six symbols on either side and you get the word THRASH.

All the words are made up of a punctuation mark with two letters inserted (or on the sides). For instance, COLO(g)N(e) --> COLON and (t)H(r)ASH --> HASH. Those punctuation marks appear twice each in the text after "META:". Replace the two occurrences with the two extra letters, in order. 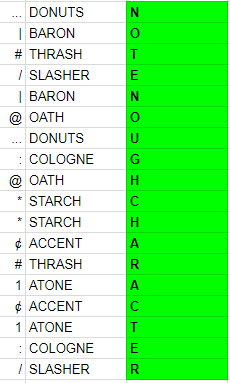