I created a new cryptic-crosswords grid : 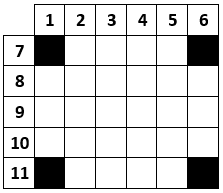 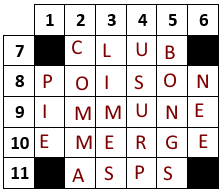 1. PILULE with LUL (start of LULLABY) removed.
2. M (beginning of MIRACLES) inside COMA (an unconscious state).
3. Anagram of SLIME.
4. U (you) plus first half of SURPRISE.
5. [Not sure I've parsed this as Thrax intended] Second letter ("two") of BANGS replaced with O (ring).
6. Initial letters of North, Eastern, Element.
7. L (one end of STEEL) inside CUB.
8. O (first letter of OCCURS) insider PI (private investigator) plus SON (scion).
9. IMMUCHNEARER without CH (Switzerland), AR (Argentina), ER (Eritrea).
10. MERGE after E (one end of THYME).
11. Anagram of SPAS.

Some comments since Thrax has indicated in TSL chat that s/he's interested in feedback:

Mostly very straightforward, especially with almost every letter cross-checked. There's nothing wrong with that, but if you want to make your crosswords more challenging then reducing the amount of overlap will have that effect. The clues are generally fine in terms of "crossword grammar" but lacking in "surface reading": that is, they make sense as cryptic clues but not much sense as actual English. A couple of them have decent surfaces: "Slime around fruits", for instance. Most of them, not so much :-). It's often possible to improve the surface quite a bit while keeping the overall structure; e.g., suppose 2 had been "Short break in unconscious state: a miracle begins"; it's still not great but it's at least suggesting a coherent story: an unconscious patient flickers briefly into consciousness, and it's a miracle. More specific quibbles: I'm not keen on "original lullaby-free" meaning to remove the first few letters of "lullaby" -- it feels not quite grammatical. "Fruit" can be plural as well as singular, and would probably have been a bit better surface-wise. I'm not fond of "U" for "you", though it's not actually wrong. I'm not sure I've understood #5 quite right; if so, then it's a rather non-standard use of "two" and I'm not convinced "bongs" are "drums". (Bongos are drums. Bongs are noises made by a large bell or gong, or water-pipes for smoking drugs.) "Protected" and "Concealed" are kinda doing the same job, and that clue would I think have been better with only one of them.