What did Louis do to measure the cardboard box?

When Louis arrived at his apartment in Europe he found a note pinned to the wall in his study. The note was pinned on a 10 Euro bill. It was from his yankee roommate Jack, who always liked to play games.

“*This 10 Euro bill is yours if you confirm for me that the dimensions of the empty box on the floor are 15Long X 11Wide X 15High in inches—yes inches!

Imperial units, damn, thought Louis. But he couldn’t let Jack win. So he set about to measure the box.

He made some quick observations. The box was a normal cardboard box (like ones you get from AMAZON.COM). It had no top or bottom. So only 4 sides. Clearly two sides looked like a square and could be 15X15, he concluded. The wooden strip looked like a Ruler with no marking on it whatsoever. Could not bend it either. There was not much else in the room. Some frames on the wall, a study table with an old Coca Cola can, a printer with A4 paper and pens and pencils.

Then he pulled out a blank paper from the printer and wrote or sketched something. He took out his iPhone 6 plus and checked a couple of things. Then he smiled.

Using something, he made one mark on the wooded strip with the pencil. He took the box and made his first measurement. “YES” he shouted. Then he made some additional checks using the box and the ruler.

He wrote all the procedure down for Jack. He pocketed the 10 Euros and headed to the bar. “I think I deserve a beer” 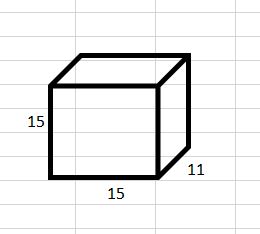 This updated method uses the following:

Then since it a cardboard box with no top or bottom 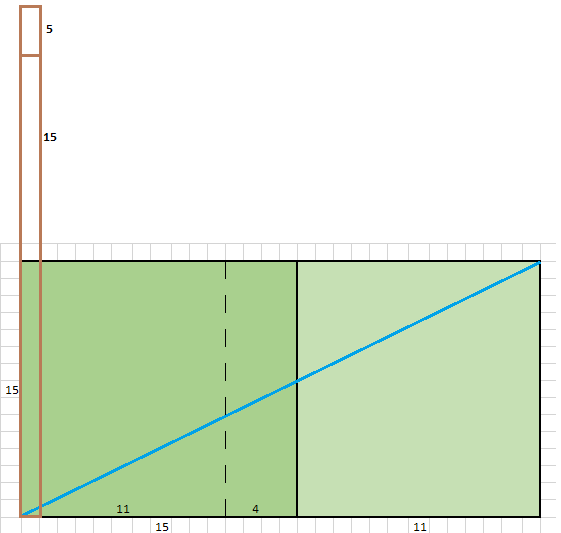 He measures both diagonals using the 30 in length of the strip and these are correct to 0.05 in.

He can measure the 15 in long sides first, before flattening the box, by lining up the wooden strip along one face - say the left face of the box - and then rotate a quarter-turn along the top left edge, until it lines up along the top-edge of the front face. The 30 in mark should be aligned with the right side of the front face.

Louis can do the following:

1) Align the ruler along one of the longer sides of the box (one end at a vertex of the box) and add a mark on the ruler at the far vertex.

2) Align the ruler along a second (perpendicular) long side and confirm that it is the same length. At this stage Louis now knows the box is of dimensions AxAxB for some unknown A and B.

4) Carry out a similar process, this time running along a length A side 7 times (flipping the ruler as in step d] above twice, as necessary).

Figure below shows approximately how he would do it. 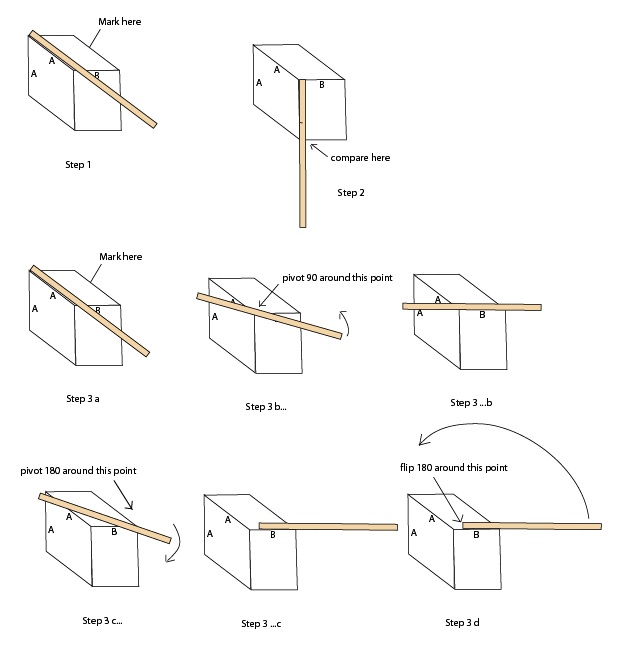 So Louis doesn't need the Coke can, the A4 paper, a Euro note, or even a pencil to confirm dimensions of the box.

I suspected that both the 10 Euro bill and the A4 paper where useful as they have specific dimensions. A4 paper: 297mm x 210mm. 10 Euro bill: 127mm x 67mm. Assuming that there are at least a few piece of A4 paper, then the following is possible.

Arrange two piece of paper over the wooden ruler so that one piece is vertical and the other piece is horizontal. These combined lengths give us a length of 297mm+210mm = 507mm. Lets mark the wooden ruler here. We know that the ruler is 35 inches long which is equal to 889mm. So now we have a ruler that can measure 507mm = 19.96 inches on the one side and 889mm - 507mm = 382mm = 15.04 inches on the other. Now we can measure the sides that are 15 inches within the error margin.

To be able to measure the 11 inch side we need to use both the A4 paper and the 10 Euro bill. First we place two horizontal pieces of paper starting from the line we drew earlier on the wooden ruler, towards the side the is 507mm. The we place 3 vertical pieces of paper starting from the end of the horizontal papers that we places and towards the line we drew. We will then see the the last vertical piece of paper will be slightly over the line we drew and this distance will be equal to (3*210) - (2*297) = 630-594 = 36mm. If we then place the 10 Euro bill vertically next to the vertical papers then we get the extra length of 67mm. This together with the line drawn and the overhang from the papers give us a distance of 507+36+67 = 610mm. If we remove this length from the total length of the wooden ruler then we will get 889mm - 610mm = 279mm = 10.98 inch. Now we can measure the side of the box that is 11 inches inside of the error margin. 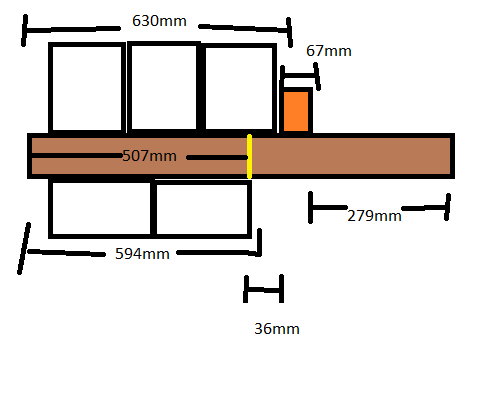 And that's how Louis proved it:

Not the answer you're looking for? Browse other questions tagged riddle geometry or ask your own question.