A problem about Yin-Yang puzzles

In a Yin-Yang puzzle, one must fill every cell with either a black circle or a white circle according to the following rules:

Below are two Yin-Yang "puzzles". Which of them, if either, has a unique solution? (Naturally, give a full proof.)

The puzzle on the left has many solutions, while the one on the right has no solutions.

I'll start by dealing with the rightmost puzzle.

Call the two vertices on the boundary where white meets black A and B, where A is the near the given clues. Imagine starting at point A, and following the border of the black region until you reach point B.

Therefore, the boundary path visits every interior vertices exactly once. 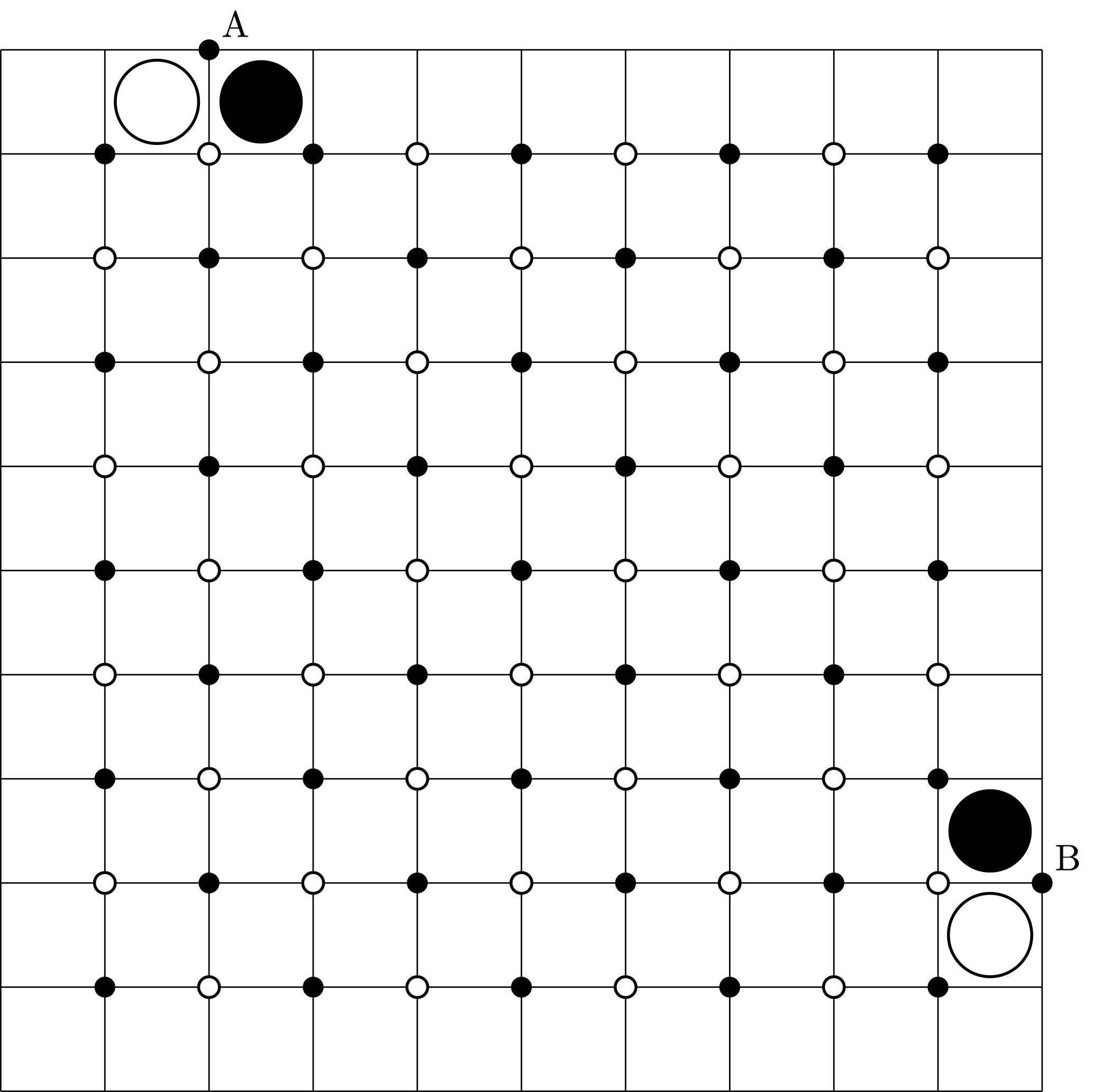 This also shows that a solution to the left puzzle is given by any Hamiltonian path on the interior vertices which starts near the given clues and ends near the border, of which there are many.

has a solution but the solution is not unique. You can change the bottom right corner to a white dot, and the grid is still correct. 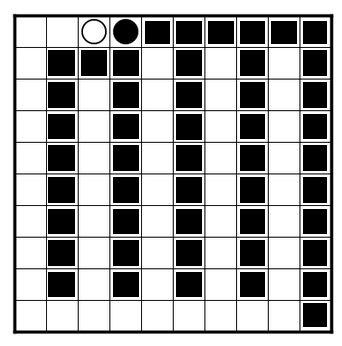 does not have a solution, in order to follow the rules, a black dot would need to be placed below the initial white dot. This then forces the dots onto even columns, and due to the edge to edge requirement means that we'll always end up with a 2x2 square. 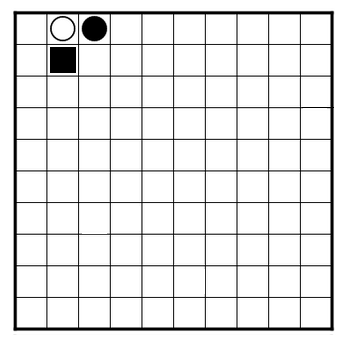 So you're forced to place a black dot where the black square is. You then have to connect these two black dots edge-to-edge without blocking white sections from being edge to edge. Your options are to place a black dot where the gray square is, or go around. Because the white dots need to be connected you can't just block off the edge and do a row with alternating columns from the gray dot (you either have 2 white spaces -green, or white gets trapped at the top -blue). And you can't run down the side because you won't be able to connect to the forced black dot position without block a white path -purple. The black dots are forced to stay in alternating inner squares, and because of the one odd square, it means you always end up with a 2x2 section. 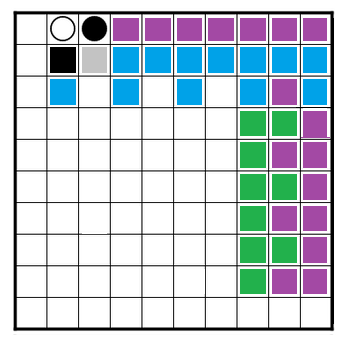 Which of them, if either, has a unique solution?

Emma has already dealt with the left-hand grid. What about the right-hand one?

First, here is a useful theorem:

Now, suppose we have a solution for the RH grid. Consider

how many contiguous white cells there are around the edge. If we make the number either 1 or 2 then the remainder of the edge must be filled with black cells, and then it's easy to see that the 1-case and the 2-case look exactly the same apart from the state of the top left cell, and in particular neither of these options can yield a unique solution because if one works then the other does too.

This leads fairly easily to

but at this point I am stuck for the moment because

for neither of these can I see a contradiction, a clear path to a unique solution, or a proof of multiple solutions.

It is pretty easy to show on grid2 that:

If the grid was 4x4, there would be no solution. Partition the grid to 4 2x2 squares, and we know each square requires at least 1 black and 1 white. Plus the middle 4 require at least 1 black, 1 white. Now consider top left square. It can have black on the bottom left or right. If it is bottom left, this forces black X all over the edge as proven by gareth. This leads to one of the squares having 4 black, or having 4 whites in the central square.

Now, bottom right of the top left being black means the following image:

Now, let's consider what color can the a have - it is obviously x, as if it was o, those x (or o) could not be connected. Now this in turn leads to b being o. And this is just again the mirror image of the first case. So, there is no solution.

Now I assume the above should probably generalize

to no solution in the 10x10 grid. No proof for that, but it seems likely from the 4x4 case. I would probably have to do induction and consider N+2 and prove this for all even N.

Incomplete answer. I attempt to prove the theorem in a very roundabout way. It is easy to intuitively understand the theorem, but I would love if someone could simplify this formal proof.

Any complete board consists of contiguous paths, 1 cell thick, where the path is surrounded by other paths, each 1 cell thick.

The cell the snake head is currently on, in the board (e.g. a black cell).

Let's say the snake starts in the center cell of the board, initial heading up.

Snake branching (not essential to theorem, but I hope helps in solving this puzzle).

For any snake head position, the snake is able to duplicate its head. Each of the heads must have a unique snake heading. We can change the heading and move each duplicated head separately. The snake does not duplicate its body: all previous duplicated heads will be added to the same body. This defines path branching.

Imagine the opposite action of branching. When many snake heads meet at the same cell, they can bind together into one head. Also, they can bound then branch, for example, snake heads come in from up and down, and bind together. Then, the one snake head branches into two, and exits left and right.

The snake must be one cell thick. Proof: no snake squares are allowed.