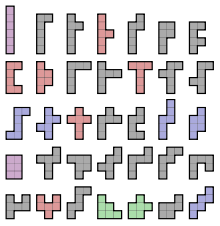 Those are all hexominoes. And before you ask, yes, that picture is from Wikipedia. 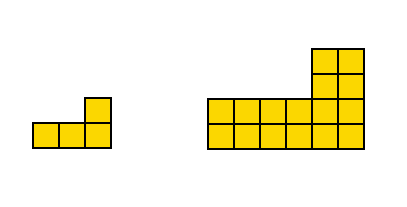 Let us call a polyomino self-similar if it can be assembled with other copies of itself to form a larger similar copy of itself. My example was self-similar, and here is the construction to prove it: 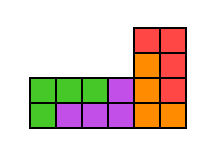 My question is this: can anybody find a set of $3$ or more distinct polyominoes so that, for each polyomino in the set, a polyomino similar to it can be constructed using the other polyominoes in the set?

P.S. That last criterion is not essential - if you like, you could find a set in which, for each polyomino, a similar one can be constructed using all polyominoes in the set, including itself.

P.P.S. I have no idea if it's possible. If you suspect it isn't and you would like to shatter my beautiful problem by disproving the existence of such a set, go for it.

It's rather trivial to prove that it's possible to create enlarged copies of each polyonimo using only one of the others.

A solution with total area 12:

L, square, and I tetrominoes. Each can easily combine with a copy of itself to make a 4x2 rectangle, and two of those can make any of those tetrominoes. Like the other answer, only one type of tetromino is required.

Not the answer you're looking for? Browse other questions tagged polyomino or ask your own question.

10
Dissecting a square
8
Polyomino Z pentomino and rectangle packing into rectangle
4
What is the largest, compact connected-network polyomino for these tiles?
9
Tetromi-nuri-doku
5
A minor rearrangement of the one sided hexominoes in 12 simultaneous shapes
11
Ziggy - Make a square from 8 polyomino pieces
12
Fewest polyominoes to construct digits
11
Generating all hexominoes by cutting and pasting
7
Finding the most flexible of all 35 hexominoes
7
Largest set of independent hexominoes