two of A, B and C in each row column and diagonal

This puzzle comes from a book called "Braintraining Puzzles" (The one with a blue-green cover). It involves a 6x6 grid which needs to be filled with two copies of A, B and C in each row, column and diagonal. There are certain restrictions given at the start of the puzzle. For this puzzle:

I am looking for a complete solution that explains how to solve the puzzle step by step (avoiding brute force/trial and error). (If I just wanted the solution, I could just look at the back of the book where the solutions are.) 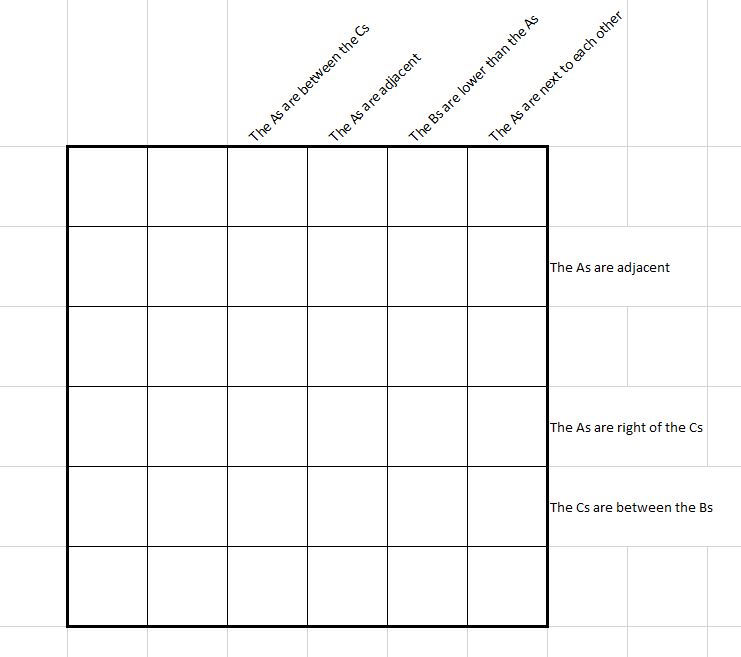 I was able to solve it with using only one guess. Using notation (row,column)

Eliminate all the starting values from the rules.

Eliminate via the rules, then make this step:

The rest is straight elimination via the rules. 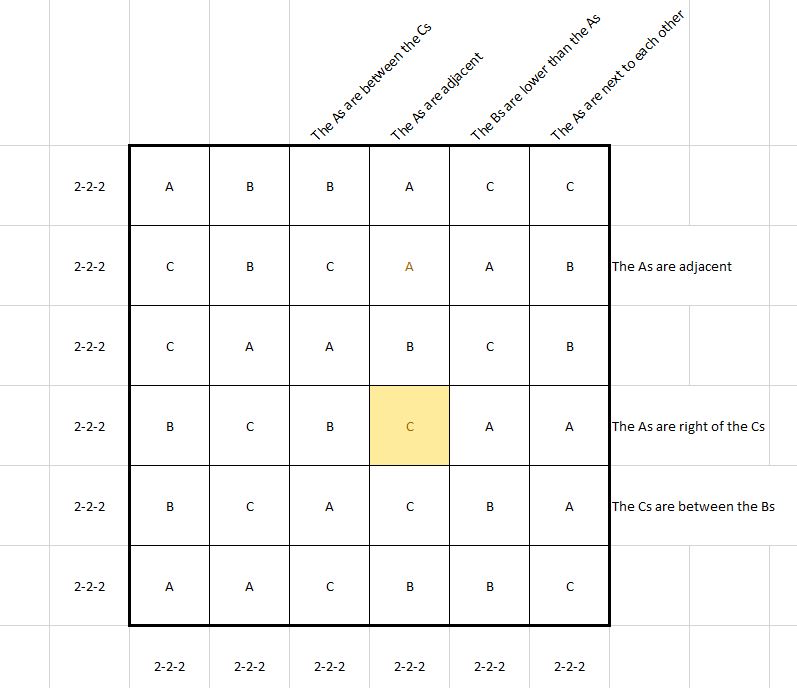 Next steps: Eliminate the need for the guess.

Final answer and strategy. (thanks for making me waste a few good hours :D).

Start by filling in a 6x6 grid will ABC in all the columns.

Then, using the restrictions eliminate the values that are not possible.
You get this

After this point you cannot use only logic. You have to make assumptions. Work on that assumption and if it goes wrong, go back and make an other assumption.
What can go wrong? You end up with 3 Bs on one row. You end up with only one cell that can be A and so on.
My idea of a starting point was column 4: "As are next to each other". There are only 5 possible combinations.
It took me a while, because ...

... like an idiot I started trying with As in the last 2 rows of the 4th column and work my way up. WHICH WAS WRONG.
of course the good option was As on the first 2 rows, which I tested last. I will explain only that. There is not need to see all the wrong cases I went through.

going through the rules again we can see:
all the other values on column D cannot be A. (we already set 2 As)
row2 implies A2, B2, F2 cannot be A
column 6 implies F1 cannot be A
We now have

Again. I could not do anything else and had to make a different assumption.

now we have columns that have 2 possible values in them. Just pick one to which we could apply as many of the rules and eliminate values.
After a few failed tries I focused on E2 = A. This way I could make the rule on row 2.
Immediately we see that row 2 cannot have any more As.
Time for the next shot in the dark.
I chose column 5 because If I set E1 to C it would allow me to remove a lot of other values. (this one I got the first try :D).

Again we need a shot in the dark:

Seems like I'm on the right track. Only a few to go.
Time for an other blind stab. This is easier since there are only a few values left and you can see fast if something goes wrong.

I chose to make F6 = C since that will make me fill in a row and remove other values from the main diagonal.
Immediately D6 = 4 because it's the only one left.

Again we can afford to stab blindly.

And you end up with the solution listed at the top.

Start with a grid like this where all the cells are filled with all the possible values:

Then start eliminating values.
For example "4: The As are right of the Cs" means that the cells A4 and B4 cannot have the value A. And E4 and F4 cannot be C.
Not the grid looks like this

Going through all the restrictions you end up with this grid.

Now you have to take again the restrictions and see if you can eliminate values from other cells.
The point is to end up with cells that have only one possible value.

[Update 1]
I don's see any other possible logical ways to eliminate possible values you I think a leap of faith is required.
Idea: You can make use of the 2 statements that say the As are next to each other on a column or a row. You can start trying with 2 As on row 2 or columns 4 or 6. and see where this goes.
I tried about 2 places and I didn't reach anything conclusive. I will explore this path further.

[Update 2]
I blindly tried to fit 2 consecutive As according to the restrictions but keep getting to a step where I need an other leap of faith. I quit.

[Update 3] Maybe someone has more luck than me.
As you can see, I'm using a google spreasheet.
As shown above we can see that leaps of faith have to be made.
So I'm doing this.
I make an assumption (for example, on row 2 the As go on 5th and 6th position). Then in a separate cell I write the number 1. This means I made an assumption. I go down that path with all the logic findings I can. If I reach a contradiction, I CTRL-Z until the number 1 I wrote separately is deleted and make an other assumption.
If I don't reach a contradiction, and I need to make an other assumption, I do it and write the number 2 under the 1 mentioned above and repeat the process until I reach a solution (which didn't happen until now) or until I need to rollback again.

Not the answer you're looking for? Browse other questions tagged logical-deduction explanation or ask your own question.

9
Puzzle of putting numbers 1-9 in 3x3 Grid to add up to 15
14
A Trip to Ripple Islands
13
Strategy for solving 0hh1 and Unruly?
3
The SUM 50 Game
8
Yajisan-Kazusan: Diagonal Arrows
15
Kropki Sudoku – Sudoku based on the relation between neighbouring numbers
4
Creating the hardest 7x7 maze
25
A Minesweeper Sudoku
2
How to solve this Number Grid?
10
Calculation Sudoku