First Brainteaser of an Excited Puzzler

Introductions are never stimulating, but unfortunately it is the job of new members of the group, so abide by my ensuing unclear blather. Sorry for the odd phraseology, but the current passage is put forward in... quite unusual circumstances. The puzzler talking to you, lover of reality shows and parlamentarianism (largely impertinent to the group in consideration), at the present is going through the manifestation of one utterly exceptional panic or mania: not related to triskaidekaphobia, but not further totally unalike.

To outline me, an image was put in the fancy imgur place of yours, but the key was encoded by one routine whose title is not pronounceable to me. Maybe if one puzzler truly follows my trouble, he or she could unearth my message:

So apprise me, puzzler: after the prattle above, how would you portray me?

The key to the encoded message are the first 5 of my favored letters in English. A(3-2)Z(29-3) might point to which those are.

Tip two (out of persona):

(7): this is one part definition, one part terrible pun.
(8,7): mathematics reference, but a fairly well-known one
(7): Think simpler for this one.

All the words in the puzzle have a number of letters that is a prime number. This relates to the line about suffering from "one utterly exceptional panic or mania: not related to triskaidekaphobia, but not further totally unalike" - triskaidekaphobia is the fear of the number 13, which is prime.

As for the key "whose title is not pronounceable to me":

That would likely be a Vigenere cipher, since Vigenere has eight letters in it. I tried decrypting the Imgur link using "PRIME" as the key but it led me to another non-existent image, so it's not that.

Deusovi found the next step:

If you use the letters of the alphabet that correspond to the first five prime numbers (B C E G K), the url decrypts to http://i.stack.imgur.com/qFECT.png, which nets us this image: 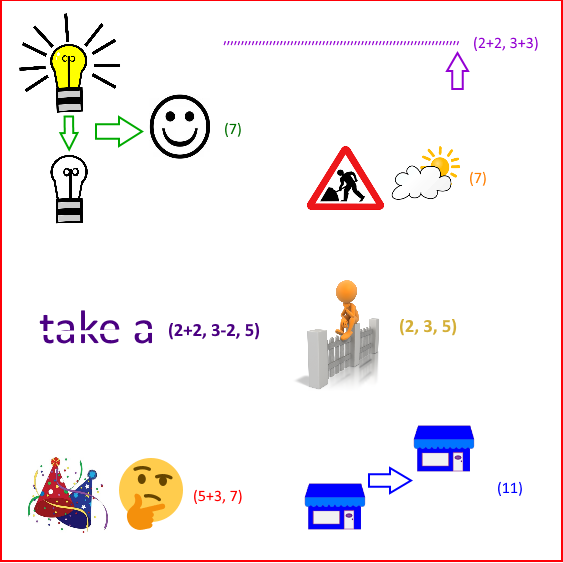 This is where the rebus tag comes in.

The plus and minus signs mean you add or subtract the numbers (which are also all prime) to get the actual word lengths:

Some of the solutions point to more prime numbers:

The enumerations of the rebuses are in the seven colours of the rainbow. Put the numbers in colour order and you get 23-5-2-7-5-5-11.

@John Clifford found the final step, and @Sp3000 got there first:

Convert the numbers to the equivalent letters, and you find what I would portray you as: a WEB GEEK!

Not the answer you're looking for? Browse other questions tagged cipher rebus or ask your own question.