How can I twist opposite corners on the top face of a 3x3 cube?

I have solved the bottom white layer and the second layer. I have almost solved the top layer also, but I have not able to solve the corner pieces.

But I have to this twice.

Can anyone please help me to solve this with more efficient way? 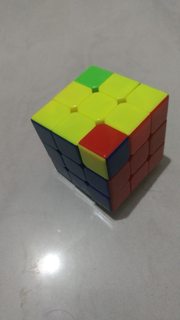 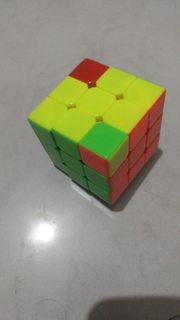 Personally I use the beginner's method when I solve my 3x3x3 Cube. In which case you can use a combination of R' D' R D (2x) sequences with setup moves to solve this.

So for your case above, put Green at the front and Yellow at the top, and use the following algorithm:

This sequence of R' D' R D (2x) you will always have to do three or six times in order to orient all the corners.

And here is a video I made about a year ago explaining the entire Beginner's Method, including orienting the corners of the last layer.

EDIT: Hmm, noticed you already know how to solve the corners, but are looking for a more efficient algorithm.. My bad.
Will get back on that in a moment.

Perhaps holding it the same as above (Green front, Yellow top), and then use the following algorithm:

I don't think it's particularly easy to remember. But it's shorter and therefore more efficient..

I'd like to explain a somewhat intuitive approach of turning these corners.

Start with blue facing front and yellow on top, as in the pictures. Let's first attempt to just turn the yellow-blue-red corner in it's place without worrying about any of the other pieces. This can be done by F R. We notice that the corner turns into it's correct spot but obviously many other pieces are disturbed. How do we isolate the turning of just the corner we want?

The simplest way to undo something that was done to the cube is to retrace the same moves backwards. However, if we want to make some changes along the way, we can choose to not undo one of the moves, which can return many pieces back but not all. So to negate the unwanted effect of the first F turn, we want to incorporate a F' turn in our algorithm, but in a way that the corner we are manipulating doesn't go back to its starting spot.

Let's start with F D2 F'. Now the front side is almost as it started and we've "hidden" our corner "behind" the cube. To get the corner back we now have a few options. A short way is just to continue D2 R, undoing the hiding move and lifting the corner into its spot. The cube is still messed up, but compared to just F R, some things are more to our liking, specifically the two pieces next to the corner that have yellow and blue on them. Maybe there is a better way to fetch the corner from its hiding spot. If we consider how it got there and imagine doing the same moves as a mirror image on R instead of F, we see that it can be fetched by R' D2 R as well. This is even better as it anticipates the effect of the R and in a sense undoes it ahead of time.

Where are we now? We've found that using the moves F D2 F' R' D2 R we can turn the corner correctly in its place and not disturb quite as many pieces as just simply doing F R. Unfortunately, many pieces are still all over the place. We do however notice, that the top layer is looking better and it's only the first two layers that are in need of repair. Once again the simplest way to fix these two layers is to undo every move we've done so far: R' D2 R F D2 F', but of course this also restores the corner which we worked so hard to twist. So before we undo any of those moves, let's move that corner out of the way again. Similarly to how we previously did D2 and hid the corner, we now use U2 to swap the corner that is being turned. This works because the rest of the top layer is unaffected by the planned moves. Finally, when we fix the first two layers, we still need to turn U2 to undo the swap and the cube should be solved.

Putting it all together, the sequence ( F D2 F' R' D2 R ) U2 ( R' D2 R F D2 F' ) U2 does what we want. This algorithm has a lot of symmetry to it. We essentially take the corner down from the top layer, hide it away, undo the first move; then we fetch this back symmetrically to reach the half-way point of the algorithm by swapping the corners on the top layer, finishing off with doing all this backwards.

If you have three corners to twist, you'll have to perform this twice, but be careful not to turn all the corners in the same direction, but rather in pairs of two in opposite directions.

Do comment if you come up with other cool variations :-)

The most efficient and easy to remember is a meson discovered by Erno Rubik himself:

By the beginners method You can use this algorithm R U R' U R U U R' By this algorithm two to three times by keeping green as your face you can solve your corner piece.

This sequence twists the front two corners on the top face:

We can write this

To swap the front right corner and the back left corner, both on the top face, use

Written out in full, this is

You can use an OLL (CFOP Fridrich) algorithm to complete the yellow side. For this case: Position the cube as seen in the pic with yellow as the top face and carry out the algorithm.

You can then use either the beginner's method or any other layer-based solving method to arrange the top layer into the correct positions (PLL in CFOP).

You can solve this with a slightly modified version of your algorithm. With green in front and yellow on top do:

You'll notice that all I did was add a B' and a B. This works because the algorithm only moves two pieces, allowing you to do set up moves to change which two pieces are changed.

7
Last 2 pieces in Rubik
1
Swap diagonally opposite corners of one face without changing orientation and without affecting rest of cube?

0
How to swap two opposite corner pieces of a solved face?
2
how to shift all 4 corner pieces of the white face by one position
2
Solve 5 last corners in 4x4x4
1
Swap diagonally opposite corners of one face without changing orientation and without affecting rest of cube?
0
Unsolvable enigmatic 3x3x3 Rubik's cube?
8
How do I solve the top yellow layer of the Rubik's cube?
2
How to get the final corners of a 4x4x4 in the correct position
3
Can I swap two "yellow" corners on the same side?
2
Looking for an old Rubiks cube algorithm
2
Rubik's Cube - How to swap 2 middle layer pieces, it can affect the top, but not the bottom