The answer book of this puzzle book says that the first five are all consistent but the last one is not because the Z has to be a U. I can't seem to agree with this as U seems to be attached to N, P, E, L & Z. Clearly it can only be attached by four ends adjacent wise..

If PUL*, then N and Z must be on the top and bottom. Third&fourth in agreement. And first. Wouldn't this mean the 2nd and 6th are the odd ones out?

I'm going to use directions here in relation to the letter's perspective, so something described as "above" a U means it is on the side adjacent to the "top" of an upright letter U.

Additionally, I'll use numbers to describe the dice (left to right) so P1 refers to the P on the first die, while L5 would refer to the L on the fifth die.

The first and fourth are consistent, as they are basically a rotated view of the same three sides. Note that in the first the side that looks like an N ends up looking like a Z in the fourth, due to the orientation. In both of these, the U side has a P "below" it and the Z/N to the "left" of the U. So we can ignore the fourth, for now.

The third and fifth dice are similarly consistent, as there is an L to the "left" of the U and a Z/N "above" the U. The orientations of all letters are correct, so we'll ignore the fifth die.

What about those two pairs compared to each other?

But notice that the U3 cannot be the same as U1, as U1 has an N/Z to the left and U3 has an L to its left. So either these two pairs are inconsistent, or they are showing two different letter U's on the die.

One of the remaining two:

And the last one?

This puts a U to the "left" of P1, which is inconsistent with P6, so P6 is the only one that doesn't fit with the rest.

Why this one is tricky (in my opinion):

The trick to this puzzle is that you end up assuming the letters are P-U-N-Z-L-E when in reality they are P-U-U-Z/N-L-E.

First I realized N and Z could be the same; this means we know there are five distinct characters on the cube — P, U, N/Z, L, E — so the sixth face could be (and likely was) a duplicate character.

We have now placed all six faces.

Here is a layout of the cube: 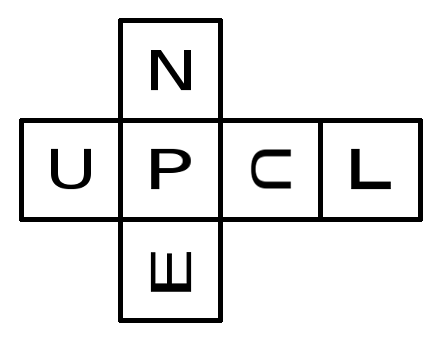 If you rotate the entire layout clockwise 90° you see the E and the sideways P from Image 6, and see that the face "above" them is a U and not the Z shown in Image 6.

6
2 circle with different radii covers same path on same number of turns… crack the fallacy
5
What did Louis do to measure the cardboard box?
6
How many possible different shapes are there on a 4x4 dot grid?
13
Ernie and the Case of the Singing Sisters
9
Twelve Labours - #04 Erymanthian Bar