To help people think this out, I've made a web game with increasingly difficult cpu players to allow brainstorming and testing strategies:

This puzzle is about strategy in a variant of Tic-Tac-Toe. The game differs from the usual version in the following ways:

With perfect play can you get four in-a-row? Or can you prove that it is not possible?

NOTE: I am not a web developer, so I apologize if the interactive version doesn't work for you. The goal is to figure out how to guarantee four in-a-row or prove it is impossible for the game described above please let me know if the interactive game seems to deviate from that.

The version 3.0 cpu player does not try to think any moves ahead. It just calculates a heuristic score for one of 24 spots around the player's last move, and moves in the best available spots allowed. I set it up this way, to make it easier to reason about. If it turns out that this strategy is sufficient to prevent 4-in-a-row, then that solves it and I find it is easier to reason against a simple concrete opponent. Alternatively if one can find how to get 4-in-a-row against this computer player, it may allow for a strategy to guarantee 4-in-a-row. If you'd like to know more about the cpu ver3 strategy, I've tried to comment the code to explain, so just read the cpu player's javascript.

Again, the goal of the puzzle isn't to beat the cpu, but playing against the cpu may help you think out ideas and try strategies. That being said, if you manage to beat the hardest cpu player, please post your move log so we can learn from your amazing strategy skills. Good luck!

Note: the contents of this answer are not actually correct; however, I've been asked to undelete this because it contains content that might be useful.

I'm still trying to work through what I missed, but in essence, I think it comes down to the assumption that Red plays pieces that are adjacent to existing pieces, or do not otherwise interfere with them. I'm not totally sure, though, and I'd definitely be interested in an explanation.

It actually makes absolutely no difference what player 1 does in this situation, since it's not possible for player 1 to achieve anything more than a length of 2. Here's what you have to do, as player 2:

Whenever Player 1 makes a move look at all the adjacent squares.

How does this work in practice? I'll walk through a few steps. 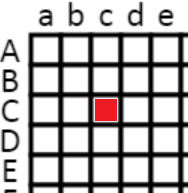 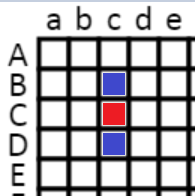 Blue sees that there's a red square, and there are no places where Red could go to create a chain of three. So, per instructions, Blue fills in two squares on opposite sides of the red square.

Step 2: Red tries to break away! 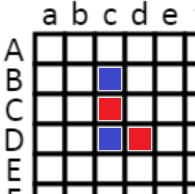 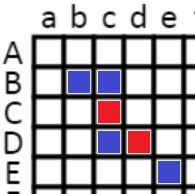 Blue sees that Red has tried to break away diagonally. Since there are two spots opposite each other where Red could break away, Blue fills those in. 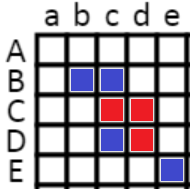 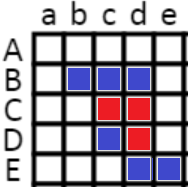 Blue here sees four spaces which could generate chains of three. Since two of them are opposite squares, Blue picks a random pair and fills them in. The result is the same. 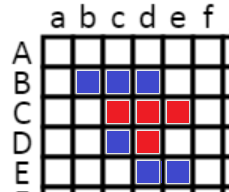 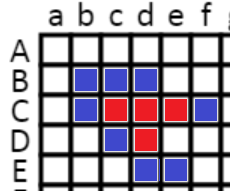 Blue here sees two spots where a four-in-a-row could happen. Blue obviously fills them in.

Here's an easy explanation that's very intuitive: any time Red could make a 4-chain, they're cut off at both ends. This is actually not simple to demonstrate, though.

What we need to show is that Red can generate at most two openings for a fourth piece to go into at a given time. If there are only two open slots, Blue will fill them on the next turn and the chain will die at length 3.

We know that Red can produce 2-chains, and that Red can produce 3-chains from them. Let's take a closer look at why Red can even do this, and classify it a little. In order to create a 3-chain, Red needs to unify two 2-chains at a common point. (I'll call these linked 2-chains.) Each individual 2-chain only has two openings to expand into 3-chain. However, if we conjoin two of them at a common point, then the resulting group is given not two, but four openings.

In other words, the fundamental property is: a single chain of length two or greater can only have two degrees of movement. (A chain of length 1 can have up to eight, by comparison.) Because the chain must go in a certain direction, at most two possibilities exist: continuing off either end. When we stick them together into linked chains, however, we can at most add those degrees of movement together, and adding two 2-chains' movements together gets us a 2-chain with movement 4.

Here, Red only has two openings to create a new chain. Both of these will be cut off when Blue moves next. However, Red can force Blue into a helpful chain: 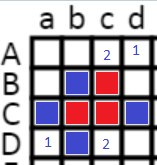 How did Red do this? They went first in Cb. Blue blocked some random squares off, then Red went in Cc. Blue necessarily blocked off this chain of two from becoming a chain of three. However, at this point, Red goes in Bc. Bc gives red two unrestricted pairs, (Cb-Bc) and (Cc-Bc). Blue can only stop one of these, so the other will be able to expand into a chain of three.

Easy, right? Turns out it's not possible.

The reason is actually pretty simple: you need to create two 2-chains that are adjacent to each other. You'll get to a position comparable to this:

It's theoretically possible, if you already had two existing 2-chains and could link them at a unifying spot. But it's not possible to get to that position; if you tried to create the second 2-chain you need, the first one will be cut off and die.

Thus, it's not possible to get four in a row if Blue plays perfectly. QED.

tl;dr? The maximum-length chain that Red can create is three. There's no possible way to generate a longer-length chain.

Here is one possible move sequence with nine moves:

The program seems to prioritize threats and then surround if none are available. By shooting one of your red blocks in the leg and leaving him in the corner, it lets you set up without hindrance. The strategy is to create a series of forced moves in spaces that needn't be occupied culminating in a cross.

Not the answer you're looking for? Browse other questions tagged strategy tic-tac-toe pencil-and-paper-games or ask your own question.