Have you ever wanted to learn mahjong but thought the game was too complex to get started? Well this puzzle will help you learn the basics of forming hands!

So come on, what are you waiting for? 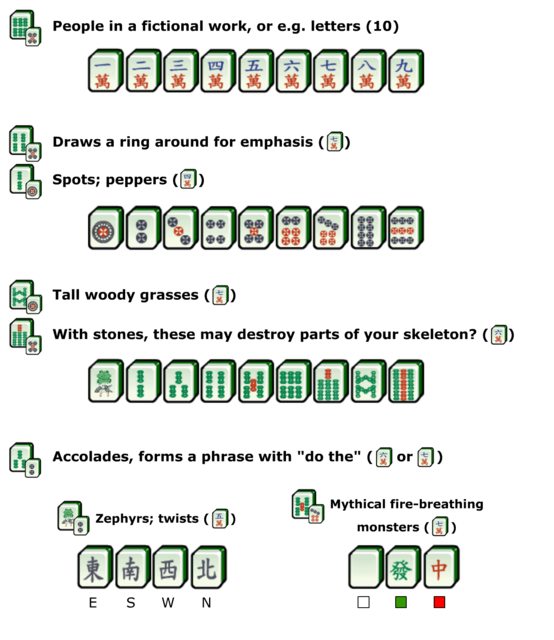 N.B. There's also quads, but they are not covered by this puzzle. 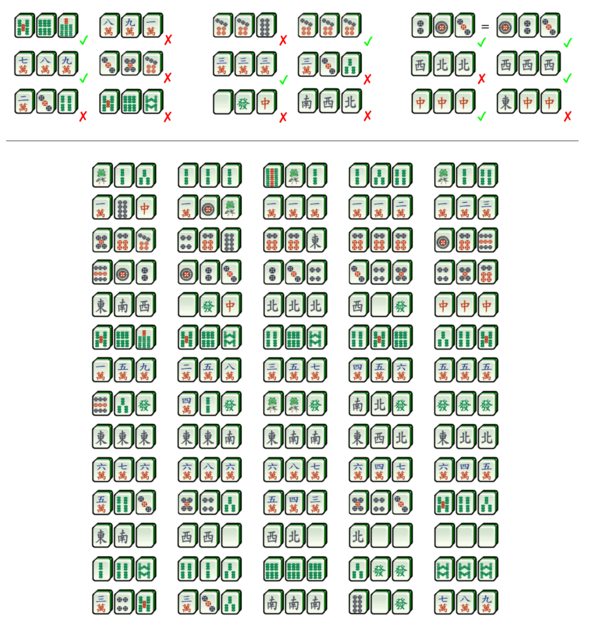 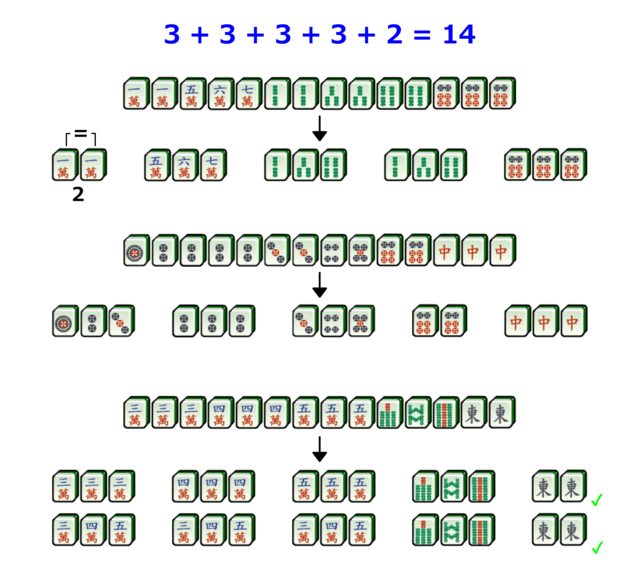 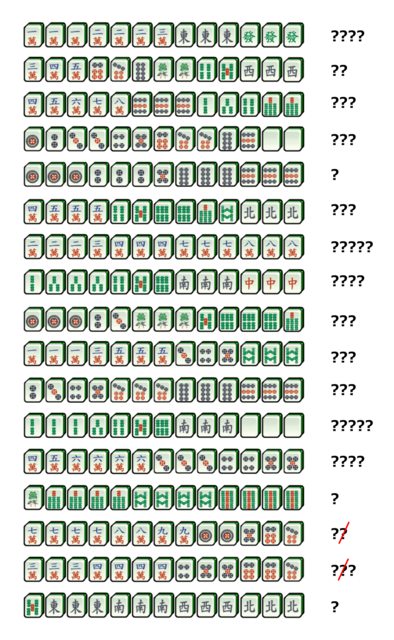 4. How to win: additional cases 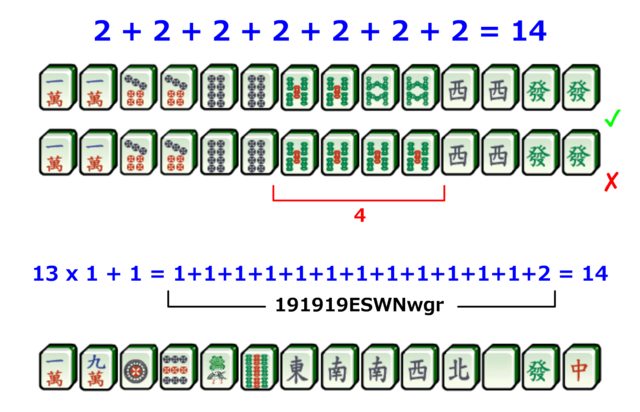 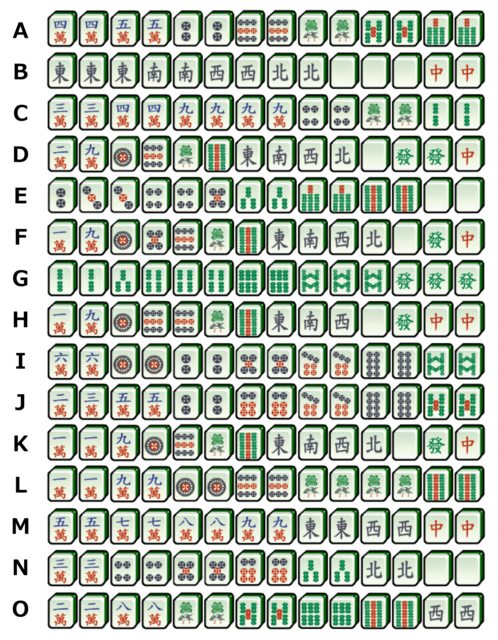 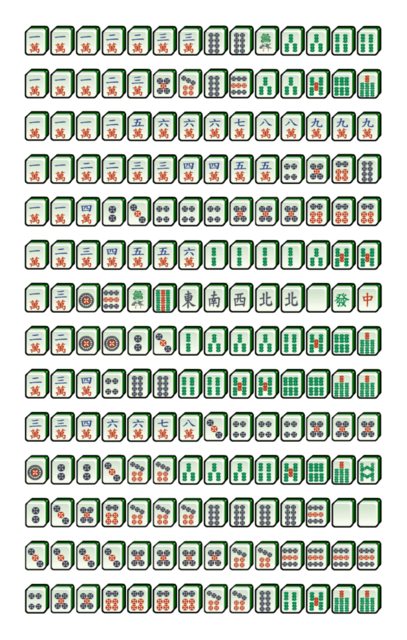 Warning: This post contains spoilers, of which some are not marked up in spoiler notation.

These are simple crossword-style clues. Enumerations are given using the tiles from 1 to 9 as numbers. (Having prior knowledge of Chinese/Japanese numerals helps, but you can probably work out that 一二三 are 1, 2, 3, and then figure out the rest using the ordering of the character tiles.)

We can extract an actual answer from this by

noticing that the bamboo tiles are 1-8 (giving an ordering), then indexing into the answers by the dots to get "IDOLS AKB" (a clue towards the band AKB48.)

We can use inductive logic from the examples given to figure out the rules of a valid meld. The examples given seem to be presented in pairs in a 3x3 grid: I'll refer to the top left pair as "duo 1", the top middle as "duo 2", down to the bottom right as "duo 9".

This leads to a good preliminary hypothesis:

A valid meld is three of the same "type" of tile (suit?) that are either increasing numbers or all the same.

This gives a final hypothesis for valid melds:

A valid meld is either three of the exact same tile, or three tiles of the same "type" (suit?) that form a "run" (an arithmetic sequence with common difference 1).

Let's use our newfound knowledge to figure out which of the example melds are valid.


Changing them to decimal and then using A1Z26 gives "ZERO ESCAPE GAME". Zero Escape is a video game series; one of its games' titles is 999 (which would be a valid meld).

How to Win: the Usual Case

The examples here appear to say that you can win by getting four melds and a pair of two identical tiles - "overlap" between separate groups doesn't seem to matter.

Down below, there seem to be hands missing a tile. The number of question marks is the number of possible tiles that could make these into winning hands.

Here are the tiles for each row. (I'll be using C for characters, B for bamboo, D for dots, W for the winds, and X for the dragons.)

Some of them are crossed out - specifically, those corresponding to 7C and 4C in the fifteenth and sixteenth sets. This is because those would not be possible in an actual game: there are only four of any tile in a standard set, and the missing tile would make the hand have five.

Adding up the possible numbers in each row gives JIROEMON KIMURA AGE - he was the oldest verified male in history, dying at an age of 116.

The first says that having seven distinct pairs is also a win condition.

The second says that having one copy of the honours, dragons, 1s, and 9s (with your remaining tile being any one of those) also wins you the game.

The letters of the correct sets are AIKMNO, which anagram into KONAMI. Using goroawase (a form of Japanese wordplay where words are pronounced like numbers), this converts to 573.

The hands here have been "alphabetized", so the order is either not given or not relevant.

The discarded tiles consist of 1D-9D and 1C-5C. Using those as an ordering, we can see the possible replacements:

These can be decoded

by summing the replacements' numbers again, giving us "EYESHIELD ANIME" - there is an anime called Eyeshield 21.

So what am I waiting for?

The sections have given us

So what are we waiting for? Another tile of the suit we have.

Not the answer you're looking for? Browse other questions tagged enigmatic-puzzle knowledge no-computers or ask your own question.

20
End of the Maze
0
A play with sequence
22
How were the Japanese planning to corrupt the youth of The West?
6
The ancient Japanese runes
14
The Hyper-Modern Kidnapper: Crime Scene #5 (The last crime scene)
10
A Body Part inside another Body Part
3
Let's play tag!
2
Let's Play! - a Scandi Drama
4
Find three ways of forming the number 100 using 3,3,5,7