A team of scientists were doing some nature-survey works at a forest-area in Germany. Suddenly they noticed, there is a cottage, probably very old.

.
They decided to take a visit to it, when they will get some time.

But when they reached to the cottage, it did not seem anyone lives there. discolored, places-to-places covered with lichen. The wooden cottage was broken on places. There were cobwebs, also ditchy places where snakes may easily stay.

When they reached the front side of the cottage, a shock was waiting. Just beside an window, a big, approx 3 feet X 3 feet, very rusty iron signboard was showing something what looks like a Swastika. 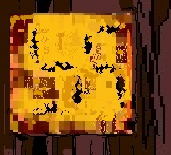 The team became quite frightened because they thought it could be a Nazi office or club, and there could be bombs remaining for many years. They informed about it to the security personnels.

The next day security personnels said no bombs or any other weapons found (except an ordinary cooking knife), They also found some household utensils, many books, mostly on literature (with many of them highly damaged due to rainfalls), but none of them was seemed related to Nazi political ideology. A bunch of paintbrushes found, a broken easel, some torn canvas with illegible images. In a trunk, along with some clothings and towels, miscellaneous study-objects like fountain-pens, pencils etc along with some diaries and notebooks from which it seems the owner of the cottage was an old woman who lived alone in this cottage, wrote poems, did paintings, and strongly disliked anything about war.

No, could you tell, why that signboard was used?

That one is pretty simple:

If you look closely at the signboard you will see a number a 56 or 59 so I think it is a house number plaque, although it would be a relatively big one since normal ones are about 8" by 15".

Probably not but I think that -if I understand the puzzle correctly- :

It was there as a protection for her, so when the germans pass by the cottage they would think she is a nazi, and leave her alone.

The window used as letterbox, where a delivery person dropped paints, brushes etc. The house number was drawn on big signboard so that delivery persons and postmen could see it from distance. The main address box with village name and other details was at door or such place which is no more.

16
The Square's Center
24
How did the man hang himself?
5
Find the secret phrase in this encrypted image (Part 4)
27
How did Alice and Bob die?
6
Where is my inheritance?
17
Who stole the sorcerer's stone?
8
Could there be some logic in this mystical gibberish?
11
Tell me a story!
7
An old man told me a story at lunch
12
A Sporting Scandal?