Karst - A variant of Cave 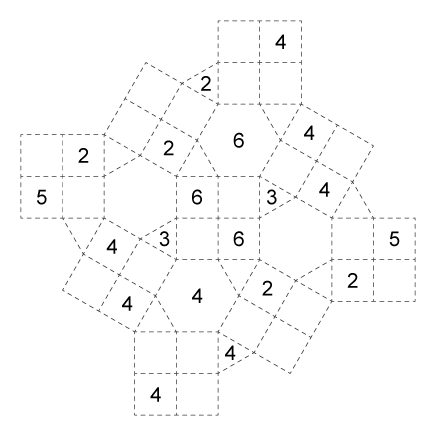 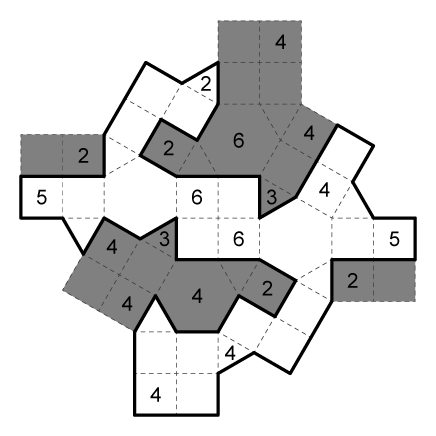 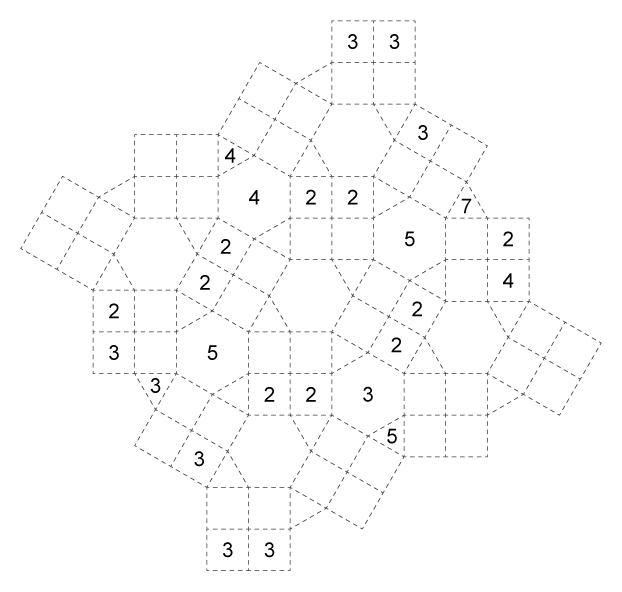 PARTIAL (will be live updated as I solve this puzzle)
UPDATE: solved. Full explanation coming.
UPDATE 2: Explanation of the breakthrough in full detail, and explanation of the 5 or so very simple types of deductions that will actually blast through the rest of the puzzle easily.

First off to notice is that:

The 2 clues act like slitherlink 3s; at most one edge can be a not wall. Adjacent 3s is a classic slitherlink deduction. 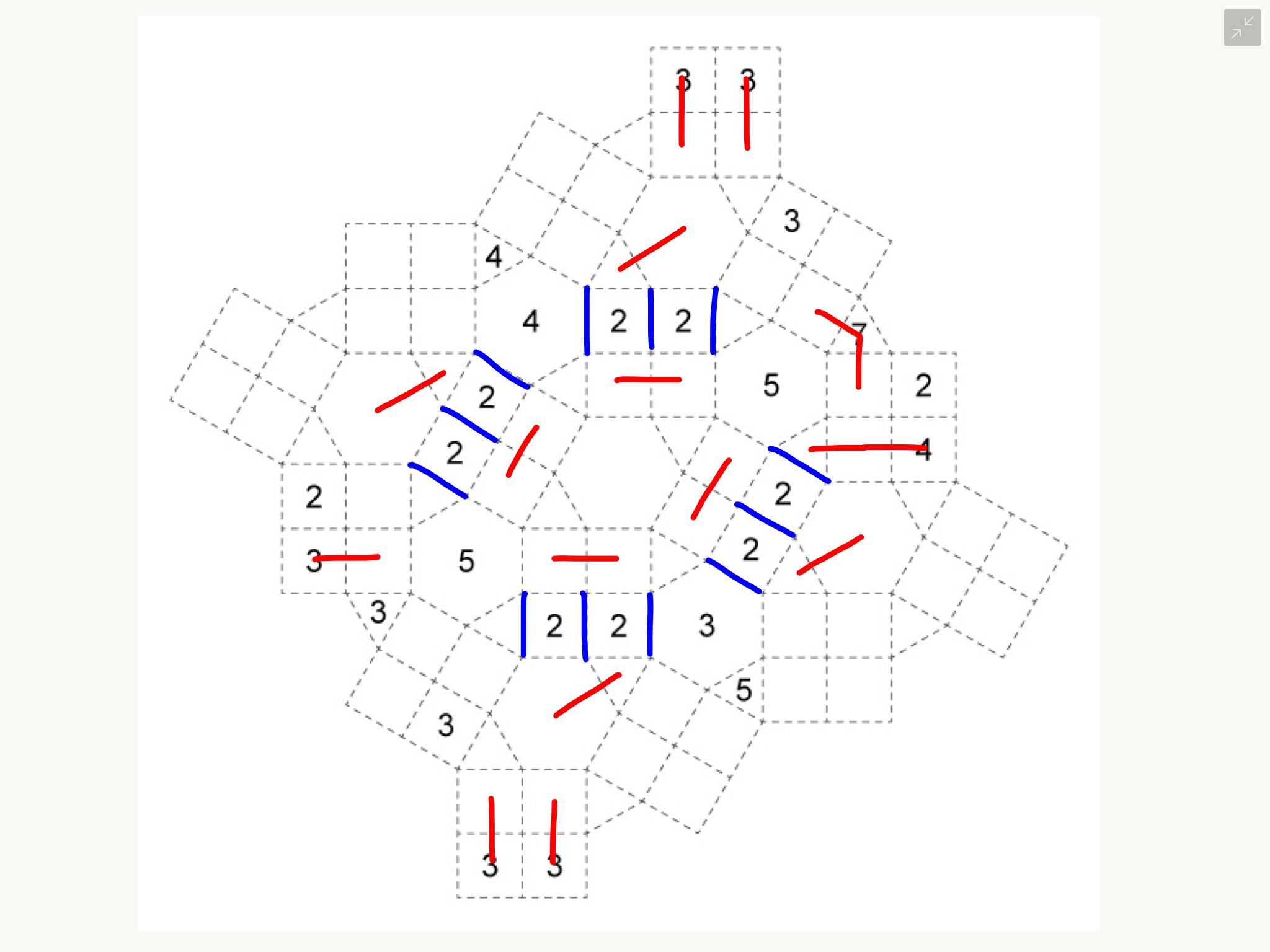 I believe this is a working solution: 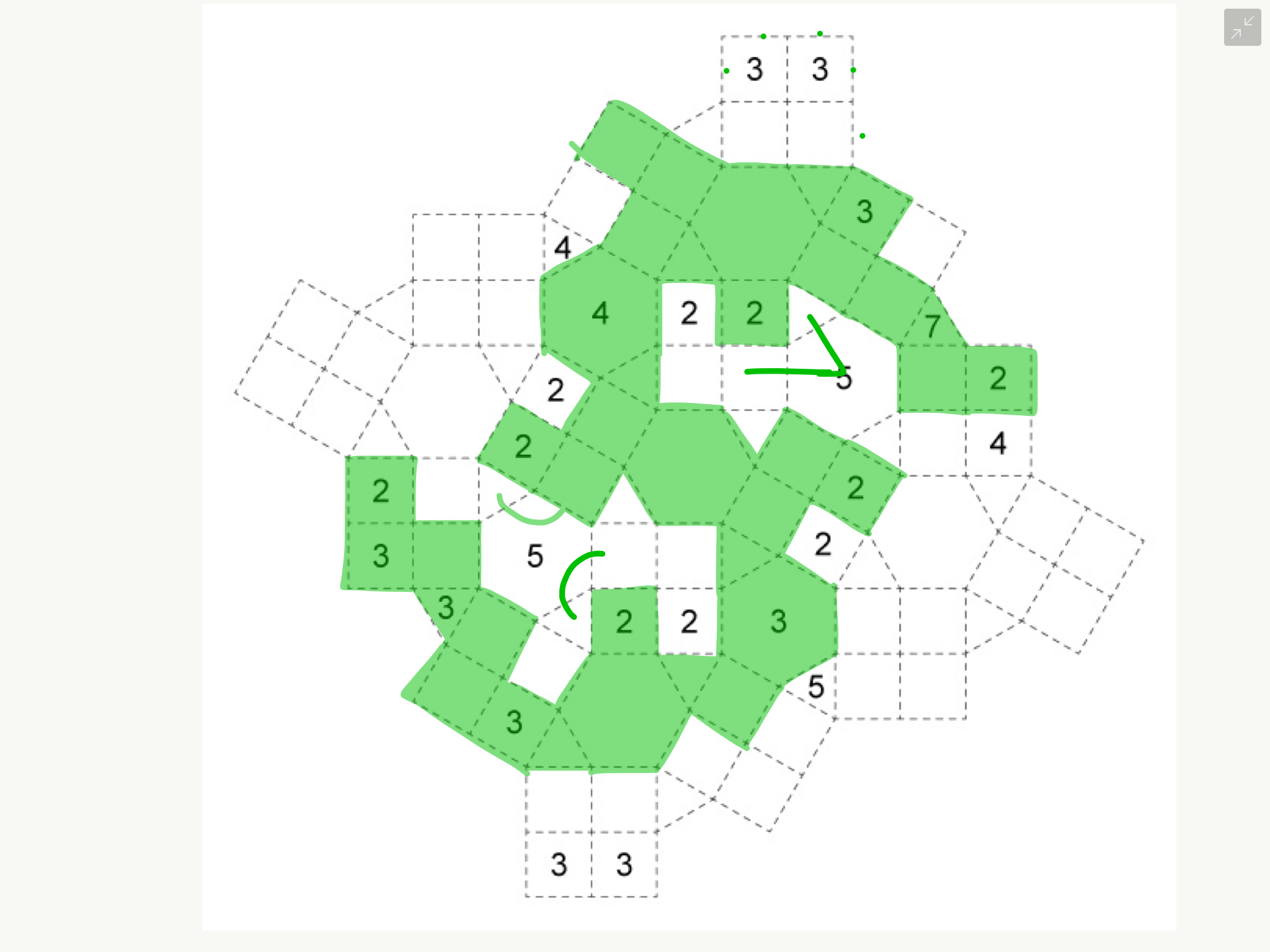 The breakthrough is pretty awesome. Focus on the lower left 5. 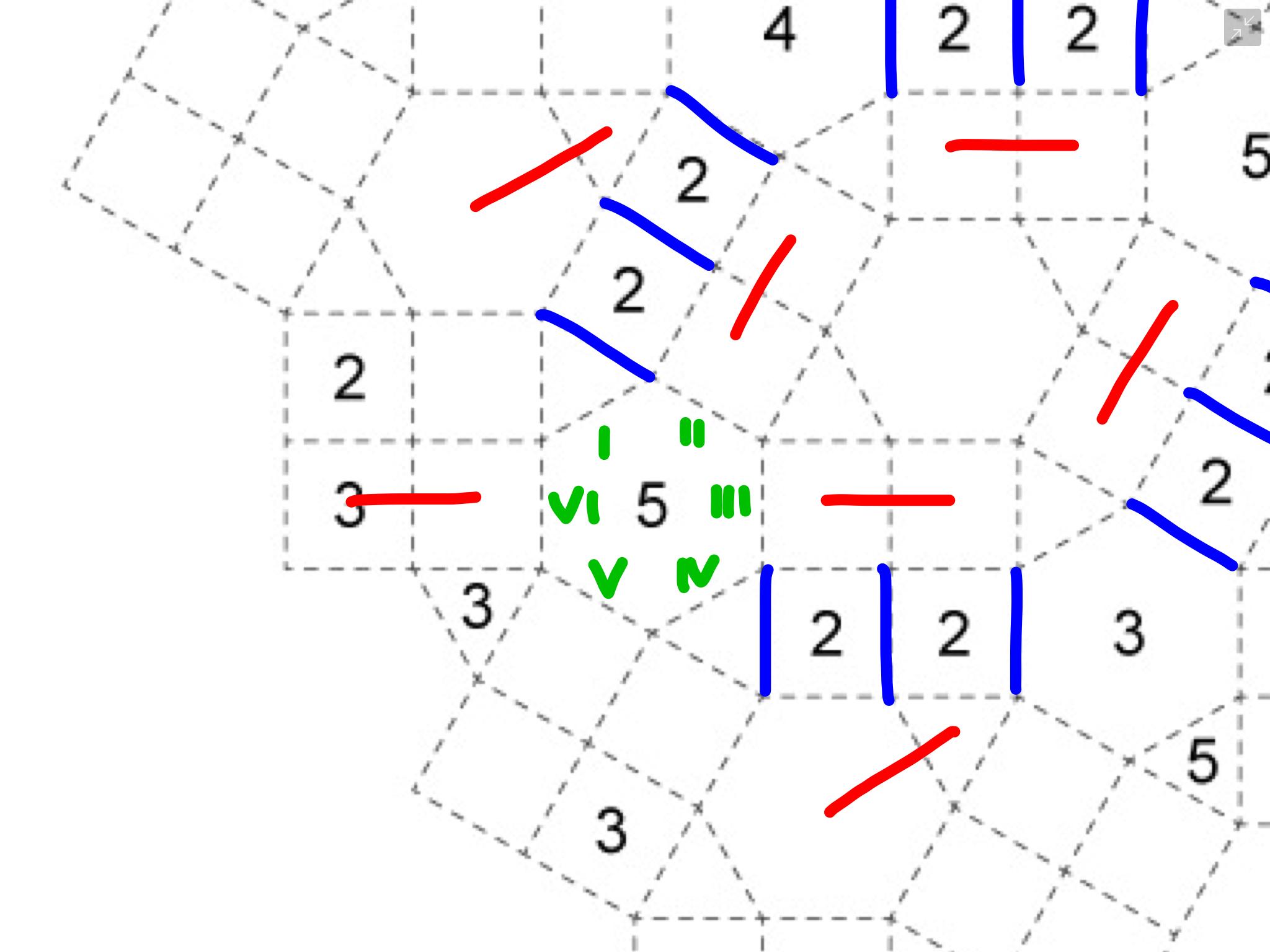 It has six lines of sight which I've labeled with Roman numerals.

Note that the 5 only sees 4 other cells out of these lines of sight (one cell, itself, is already automatically accounted for.)

Now, there's an easy contradiction if the 5 DOESN'T see through II or III (the 2 to the right of it is forced to see 3 cells), so the 5 sees out of at least one of II, III, which both have 2 cells, at least, in sight.

So, out of the at least two lines of sight out of I-IV, at least one of them has at least 2 cells being seen. That's a lot of 'at least's, which in essence just say the 5 sees at least 3 other cells out of I-IV.

So the 5 sees at most one cell out if V and VI, which simply means the 5 can't look out of VI! So VI is a wall. Tada! 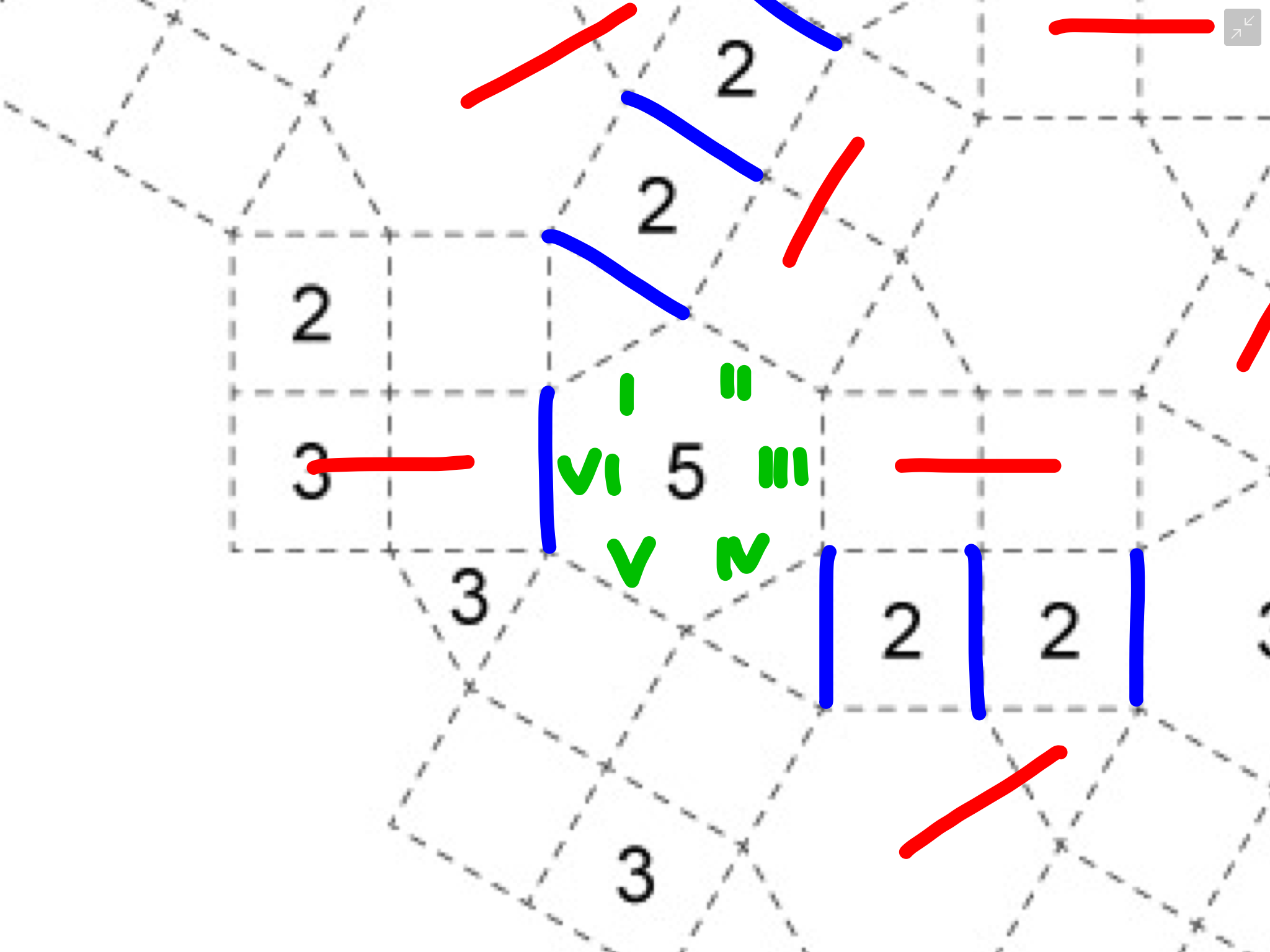 Believe it or not, this single line will render the rest of the puzzle very cruisy, using some very standard tactics.

Since the breakthrough above is the spotlight deduction, and the rest of the puzzle would make for a very boring writeup with the same tactics over and over again, I've explained the only deductions necessary from this point on in (hopefully a sufficient amount of) detail, and applying these simple tactics repeatedly will solve the rest of the puzzle without fail! This is, possibly, more instructive than a full walk through.

Wall chasing: if a loop segment only has one way to continue at one end, well, then, it has to continue that way!
- this is useful all the way through solving the puzzle. This is, of course, one of the first things you should think of in any puzzle where you are drawing a route/loop.

Connection marking: once a point has two loop segments extending from it, the rest of the lines extending from that point MUST NOT be part of the loop. This is useful in forcing larger lines of sight.
- this is useful all the way through solving the puzzle. This is another foundation thing to do - marking where you CAN'T go is crucial to noticing more wall chases!

Number noticing: as you wall chase, and do the resulting connection markings, you'll notice a lot of numbers get their total completely satisfied. This means you have to block off any lines of sight that aren't stopped by walls yet, which gives you even more opportunity to wall chase, rinse, and repeat.
-This is obviously somewhat more Cave specific than the above. However, it's not really a deduction; it's just noticing something which leads trivially without any thought to some walls. But it's hard to notice without connection markings! And it'll really help in expanding the area of your possible deductions since it can create loop segments far away from where you are working.

Maximality forces: this is somewhat important at a few points in the solve. Once certain walls have been placed, numbers might HAVE to see certain squares, otherwise they simply can't satisfy their count. Make the connection markings (I.e. No walls at some points) and it'll help you do more wall chasing, rinse, and repeat.
-A cave specific deduction. Very useful in noticing how the 3s in the bottom left and top right will work out once you've got some stuff there. Mainly used in the top right corner, mid to late solve.

Loop avoiding: you can't make a little loop that doesn't involve every loop segment you've drawn. This'll help wall chasing, rinse, and repeat.
-Common in basically every single loop genre. You'd be hard pressed to find a non-trivial loop genre puzzle that doesn't use this sort of deduction at least once! This is used in the bottom left corner.

That's really all you need from this point on! After from that (really AWESOME) breakthrough, the rest of the puzzle is rendered very susceptible to these basic tricks. If there's any places where you get stuck and don't think these tricks are applicable, let me know and I'll add in something to explain if there are some harder deductions.

But otherwise, the above deductions are very easy and don't require a lot of mental gymnastics - it's a bit like a sudoku, where you just have to notice that one of the above becomes applicable, and a step by step walkthrough won't really do anything from this point on apart from making you say 'oh, I just wasn't looking closely enough there', or 'oh, I should have marked where the loop CAN'T go.' Just keep all these basic things in mind, keep a sharp eye, and it'll solve itself.