In an infinite grid of regular triangles, Niels and Henrik are playing a game they made up. Every other time, Niels picks a triangle and writes × in it, and every other time, Henrik picks a triangle where he writes a ◦. If one of the players gets four in a row in some direction (see figure), he wins the game. Determine whether one of the players can force a victory, or if both players can stop the other from winning.

The answer is no, no one can force a win. Suppose Niels goes first. Henrik can stop Niels from winning as follows: whenever Niels goes in a triangle, Henrik goes in the corresponding coloured triangle: 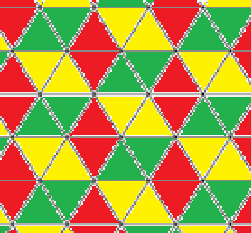 Any 4 in a row must go over a pair of coloured triangles, so Niels cannot win.

Now suppose Henrik can force a win. Then Niels steals Henrik's strategy and places his first move arbitrarily (see this). Then we know that Niels will win, by ignoring his first move and playing 'as the second player', which is a contradiction.

Since neither player can force a win, the game must be a draw.

Not the answer you're looking for? Browse other questions tagged tic-tac-toe or ask your own question.