Which one is the poisoned pill? [duplicate]

One of my friends shared this picture to me, actually I don't know from where it came from but it seems interesting to solve. 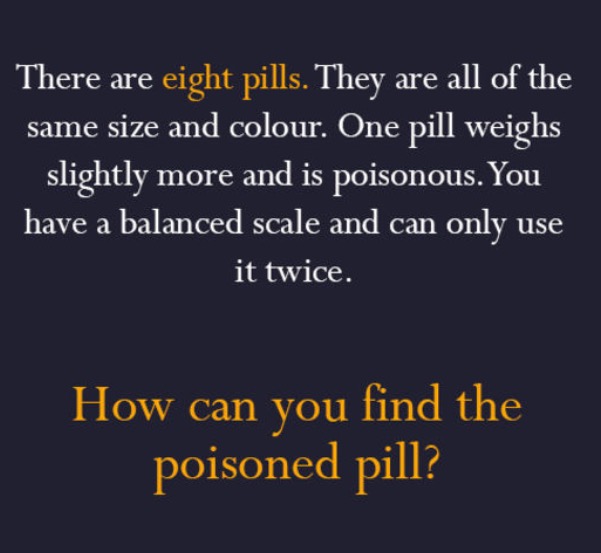 This may be a duplicate, but the trick for these types of problems is to divide and conquer, but not into two halves, but thirds. The idea is that if we divide the balls into 3 even groups and weigh 2, there are THREE outcomes. Let's call the groups A, B, and C, and weight A and B against each other:

Unfortunately here, we have 8 pills, which is not divisible by 3. We can at least pretend there is one though. Make the division 3, 3, 2. Weigh the groups of three against each other. If one outweighs the other, you have narrowed it down to three. If they equal each other, you have narrowed it down to two, which is strictly better. With three left, we divide into thirds again, this time with each "group" having one pill. Weight two against each other, and you're done.

Here is how I would do it.

First weight 3 VS 3 on the scale and leave 2 on the side.
If the weight is the same, weight compare the 2 others and you will get the heavy one.
Else you take the group of 3 that was heaviest and compare 2 of them.
If one is heavier, it's the poison, else, the one you didn't weight is the poison.

I want to give my possible precise explanation/answer to above question. Thanks @greenturtle3141 (But I know it's among the three, and proceed to phase 2)

Precise Answer in my simple version:

This is one of the easiest puzzles of its kind (and has been correctly answered among the other answers). As such, I'm going to aim for a more complete answer, explaining what sort of reasoning goes into solving this sort of question (thus, indirectly, how to gauge its difficulty). As a bonus, we can actually exhaustively determine all possible correct strategies for this puzzle. First, the strategies themselves:

The strategies are all almost the same, differing only by a single number p in the range 0 to 1 inclusive. (Most strategies for solving this problem will either use p=0 or p=1, but values in between also solve the problem in a somewhat more complex way.) Here's the algorithm you use:

And now, how you reach this result:

The first thing to do is to count the number of possible results we have. If we only have "left side of the scale is heavier" or "right side of the scale is heavier" as possible results for each weighing, then we have four possibilities (left/left, left/right, right/left, right/right); we're trying to distinguish between eight cases, so that clearly isn't going to work out directly. As such, we need to find some other information we can get from the scale.

The question isn't stated precisely, but it's clear that the extent to which one side is heavier is not useful information; for one thing, we don't know how much heavier the poisoned pill is, and for another thing, even if we did, the scales can only potentially be unbalanced by the weight of a pill (if we load them in an unbalanced way, which is not useful), or by the difference in pill weight. As such, we have to make use of the situation in which the scales are balanced. If we weigh all eight pills, this will never happen, so we're going to have to leave some off the scales.

We now have nine possibilities (left, right, or balanced on the first weighing, and left, right, or balanced on the second, gives 3×3=9). Next, we're going to look at the problem backwards: how many pills can we solve for with one weighing? There are three possibilities, so perhaps we can distinguish between three pills? We clearly can't do more. There's only one algorithm that has any chance of giving useful information (weigh one of the unknown pills against another, leave a third off the scale), and as luck would have it, that algorithm happens to do exactly what we need, giving a distinct result in each of the three cases.

Now we know that we can distinguish between three pills in the second weighing, the first weighing therefore needs to narrow down the number of pills that could potentially be poisonous to no more than three. (It's OK if we end up with less than three candidates; we can just take a pill that we know is safe, and forget that we know it's safe, in order to reduce the two-candidate case to the three-candidate case we already know how to solve.) This means that we can't place more than three pills on a single side of the scale (otherwise there'd be four or more pills we couldn't distinguish between), nor leave more than three pills off the scale (for the same reason). If we only put two pills onto the scales, we'd have to leave four off, and thus we need to put three pills on each side (leaving two off the scale).

Not the answer you're looking for? Browse other questions tagged riddle logical-deduction weighing or ask your own question.

69
You have one question to tell whether the number I'm thinking of is 1, 2, or 3
5
When logic problems require “yes-no” questions, are there conventions for questions that might get an “I don't know”?
6
Switcheroo - Which switch turns on the light bulb?
2
Sudoku solving strategy
10
Give me the name of the song
8
Riddle Poem One
11
Tricky Riddle, Wordplay heavy, What is my name?
9
Who is Pete's favourite composer?
3
Which of the six tiles is missing? — An IQ Test Question