Chi - the force of life

Following a couple hints, we find: 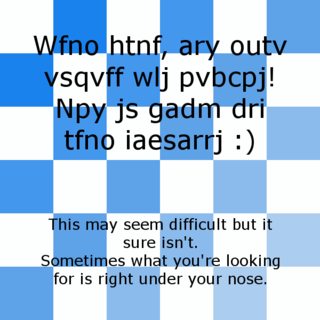 This is from taking the letters in the original image that stand out,
from left to right, as an imgur hash: Ooo0r
(and also indicates the 'missing tag' is probably imgur-maze).

The next step is obvious ...

The hint in the image that what we're looking for is right under our nose should suggest the keyboard, and did; but keyboard, keys, and a few other things didn't work. I also tried mouth and lips and mustache and the like, similarly with no results.

It turns out that the color of the blue block under the word "nose" in the image is actually hex #abcdef - which, like your keyboard, has the letters of the alphabet in it. @TechIdiot found the key "abcdef" and, at some prompting from OP in The Sphinx's Lair that blind guessing (or brute-forcing) the key wasn't needed, spotted the #abcdef color in the image.

With the key in hand, we can now decrypt the message:
Well done, you just solved the puzzle! Now go back and tell everyone :)

So - Hey everyone, I have just solved the puzzle!

it is simple but we were told

to not overthink it

69
Discover the meaning of life!
25
Dotting the eyes and crossing the teas. But where is the PIN?
5
What does it want?
5
A Puzzle For A Mystery
2
Find the TV series
12
What is so unique about these numbers?
6
Reveals a Renaming!
8
A Mysterious Number Grid
32
Mysterious Flash Drive
6
Patient No. 141