A Puzzle Whose Answer Is A Single Word

This puzzle ought to provide a good distraction and nothing more. No, this flavourtext really shouldn't give you any hints as to the puzzle's solving path or answer. 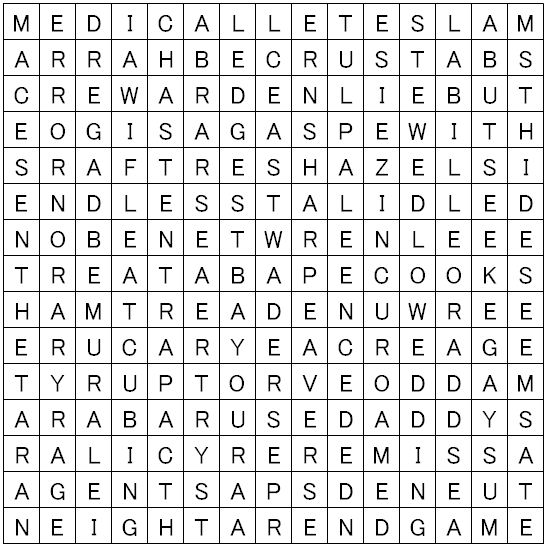 So first off, go upvote Rubio's answer as he (among others) figured out all of the CCs and highlighted all of the words in the word search, as well as found the symmetry.

So the words that appeared to stand out because they were not clued and broke the symmetry were: EIGHT -> TESLA, WITH -> ARAB, ENDLESS -> ACREAGE, RUSE -> GASP, REWARD -> REMISS. This left us with what appeared to be a final CC of:

This didn't seem to fit or give us a word so MOehm noted that there were other words that seemed to stand out. (AGENT/STABS, and COOKS/TREAT). Here is his version of the word search that helped me.

It looked like COOKS/TREAT made the most sense because they have each letter included among another word, in an every other letter format identically to each other.

So I put two and two together and realized that you could include those two words to that final CC and turn it into:

That gave us the final answer of

This fits the "Single word" answer to the puzzle. And it is most certainly a buried answer ;)

This is, at least at first, a word search with obfuscated clues for the words to be located.

The clues are unenumerated cryptics. All but one are solved, and I've guessed at that one (it's plausible but I'm not convinced it's right).

Solutions to the clues:

Thanks @M Oehm for the solution to Pod #12 rots sandwich
Thanks @ffao for the likely intended construction for Copper search going from 2 to 8
Thanks @Deusovi (@TSL) for pointing out that "endlessly" can be applied on both ends, addressing the nonexistent error I thought I'd found.

I've marked off the words I've found from the grid. The uncertain clue is in blue as I'm not very sure about it: 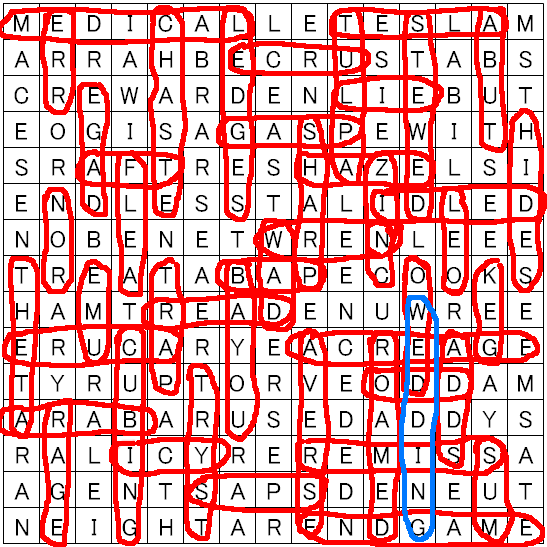 As for the solution to the puzzle ...

The puzzle is nearly, but not quite, 180° symmetrical in terms of which letters are used vs. unused. Looking at the unused letters, and marking (in green) those that are unused symmetrically, we're left with a handful of letters that are used by a word on one half of the puzzle but not the other (marked in yellow). These yellow letters are all part of horizontal words that were not clued, and which occupy squares which are symmetrical with a word that was clued. This seems promising: 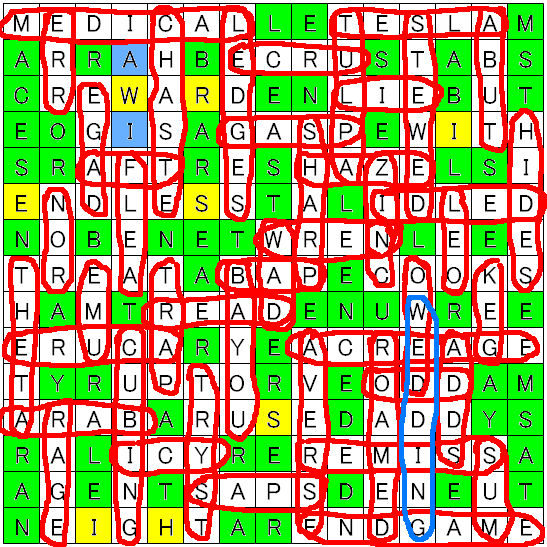 The words that stand out thusly are:
REWARD WITH ENDLESS RUSE EIGHT
or, a more likely interpretation,
Reward with endless ruse. (8)
which is another cryptic, providing the final answer.

Note we're told that the puzzle is just a good distraction, and the flavourtext says that it shouldn't give us any hints. These actually suggest a distracting red herring (a ruse); I take this to mean the final cryptic's def. should be "ruse", though alas I'm unable to find a solution as of yet.
(I'll note here that the letters marked in blue are not symmetric either, but are not part of unclued words as the yellow marked letters do; these blue letters would be green if "WEDDING" was not circled, leading me to increasingly doubt the correctness of that clue's solution. Unfortunately I'm still unable to find a better answer for that clue.)

Wrap-up: the making of A Puzzle Whose Answer Is A Single Word

Anything Puzzler Media can do, I can do better!

The idea for this puzzle was greatly inspired by (read: "stolen from") the Puzzler Media app Backwords. While I found it a pretty neat idea, definitely perfect for a hunt puzzle, I noted that Puzzler Media's implementation of the puzzle was severely lacking. All entries were contained in alternate lines, so I could eliminate half of the rows and half of the columns from my search. They also made the spaces between entries too obvious by filling them with clearly junk letters (e.g. ANONPBLOB, instead of ANONIBLOB, say, which creates the red herring NIB). This made the puzzle too trivial (to the point where I never even looked at the list of clues), so I set out to make my own version that (hopefully) actually forced the solver to solve the clues, too.

First, I decided that my grid would be a lot more irregular; it would have entries on hopefully every row and every column. I also decided that I would fill up the unused letters in such a way so as to create so many red herrings that simply searching for words in the grid without solving clues wouldn't be an option. Further, I would present this as a wordsearch with cryptic clues, and wait for solvers to hit upon the idea that this was actually a cryptic crossword with some extra letters around it; hence the 15x15 size, the horizontal-and-vertical-entries only, and the 180-degree rotational symmetry.

However, this still left the problem as to how to force a final answer out of the grid of letters. Given the "red herring" constraint, it would be infeasible to have the unused letters spell out the answer, and I wasn't at all confident in my abilities to make the intersections do that, either. That left one viable option; have some words NOT clued, and use these words to create a final clue to the answer. This had the bonus of using the fact that this was a crossword and had 180-degree symmetry.

On my first attempt, I had the final answer as BACKWORDS, the name of the app that inspired this. Apparently it's slang for "breaking promises", so I made the clue "ABOUT FACES END ODD SWORD NINE". I inserted these words into the grid, making sure to do so in a fairly irregular manner that would hopefully give me a rather irregular grid. I then used Qxw to help me create a neat grid with 180-degree symmetry, and filled in the grid by selecting some words from the choices Qxw gave me, making sure to select words that would give me good wordplay options, and that would also have nice word fragments at the start and end onto which I could latch on some red herrings. I also took the opportunity to, with the irregular grid, put in some 2x2 areas, which aren't often seen in cryptic crosswords. Then I filled in the rest with letters that generated red herrings and wrote clues for all the true entries. After some deliberation, I decided to do away with enumerations, too, as all the answers were already given in the grid. (You can see the first version here, if you're interested; I think it has some other rather neat clues.)

However, given the obscurity of the word BACKWORDS, my solvers were only able to solve everything before getting stuck on the final cryptic. Oops! Even trying to change the clue into "...ODD DRAWS NINE" to give BACKWARDS would have required me to change too much of the grid, so I scrapped the idea for a while.

Coming back to it after a month, however, I learned my lesson; I decided to find a good word I could clue much more easily, so that any trouble I might have later on would only be with the presented clues. After asking Mathgrant for a seed word, he suggested TREASURE; this I could work with, and made the clue "REWARD ENDLESS TREAT WITH COOKS RUSE EIGHT". Again I used the same process described above (though this time I put in even more 2x2 areas). Comments on the previous version also showed that people seemed to be quite amenable to Caesar-shift clues (even though they don't appear to be common, or to have even existed until a few years ago?), so I put a few of those in. I also tried to reduce the number of anagram clues I had, again from previous feedback. Given that a few words in the previous iteration ended up in this one as well (e.g. ERUCA and ADDS), I decided to reuse those clues, because I thought they were fine.

I should note that my testers all tested this under the name "Crosswordsearch 2", and the change of name to "A Puzzle Whose Answer Is A Single Word" was intended to stop people from figuring out the gimmick too soon; this is because Deusovi noted during testing that the 180-degree symmetry allowed him to deduce almost all of the grid (with the exception of BAP/WAD in the centre). Apparently this backfired and caused people to be too frustrated when trying to figure out said gimmick, as people didn't figure out the gimmick for a while. Lesson learned: Don't change the title of your puzzle without testing it again. (Though I'm not quite sure what I could have changed it to to stop people from realizing it was actually a crossword until a long while later into the solve, without making it too difficult to jump to.)

I would really like some feedback on these clues, by the way. Which clues were your favourite? Which clues did you dislike, or think were unfair? What do you think of Caesar-shift clues? etc.

19
Without a single word
41
A Single Sentence Puzzle
6
Study of this single verse
22
Here is puzzle to answer!
10
The answer to this puzzle is a three letter word
3
A Word + Number Puzzle
16
Fed Up: A Word Puzzle
3
Single word clues to decipher codewords