Ernie and the Optical Gyroscopes

I almost always take up Ernie’s offers to crew on his boat, when he suggests an overnight expedition. But when he phoned last Thursday I had to remind him that it was TV night, and Acme Satellite Studios were airing the final episode of our favorite Nordic Noir series. But when he assured me that we could watch it on board, I grabbed my wet weather gear and headed down to the docks. Ernie’s boat is rotund, and more than a little scruffy – so much so that the Yacht Club prefer him to park it round the back of the dock, away from their gleaming schooners and cabin cruisers. But it is always seaworthy and Ernie keeps it loaded up with the latest in radar, acoustic depth-meters, ship-to-shore radio, satellite navigation and all sorts of electronic sailing aids. Today there was a new addition – a gimbal-mounted dish antenna bolted to the fore-mast. “It’s controlled by the latest technology, mail-ordered from Acme Industries”, he announced proudly, “and guaranteed to maintain a good television signal, even on a rocking boat!”.

After an enjoyable day exploring the bays and sounds, we made anchor off Stormy Island and secured the boat for the night. As forecast, the wind freshened to the south, so by the time we had cooked dinner and settled down in front of the newly-installed 32’’ TV, the boat was rocking and pitching somewhat. All was going well until the last five minutes of the show when, without warning, the screen went blank and only white noise could be heard from the speakers. Ernie fiddled with the settings, but it was a good ten minutes before we got it working again. By then it was too late – the program had finished. I don’t think I have ever seen Ernie so angry. It took all my powers of persuasion to stop him ripping out the dish controller and hurling it off the boat! We didn’t find out what Saga would finally do with her suspicions about Martin until a belated breakfast at my place after we sailed back the next morning (luckily I had recorded the program at home).

After breakfast Ernie began to disassemble the satellite receiver on the kitchen table. “Good grief, I’ve been scammed!”, he cried. “Look at this!”. He pointed at the Acme Industries label on the front of the box spot which was beginning to peel off. Underneath was a second label reading Acne Imdustries. “It’s a cheap rip-off from Kzijekistan”, he said, and explored more deeply into the innards of the device. “To be fair”, he continued, “most of it is reasonably well made, but the optical gyroscopes are very third rate” - and he pulled out three small devices and displayed one of them on his palm. It was a pentagonal prism made of transparent plastic with a hole bored along its length and some optics mounted at one end. Ernie drew a diagram on the kitchen white-board to explain how it was supposed to work, but I’m afraid it went a bit over my head (I took a snapshot with my phone-camera for so I could study it more carefully later). 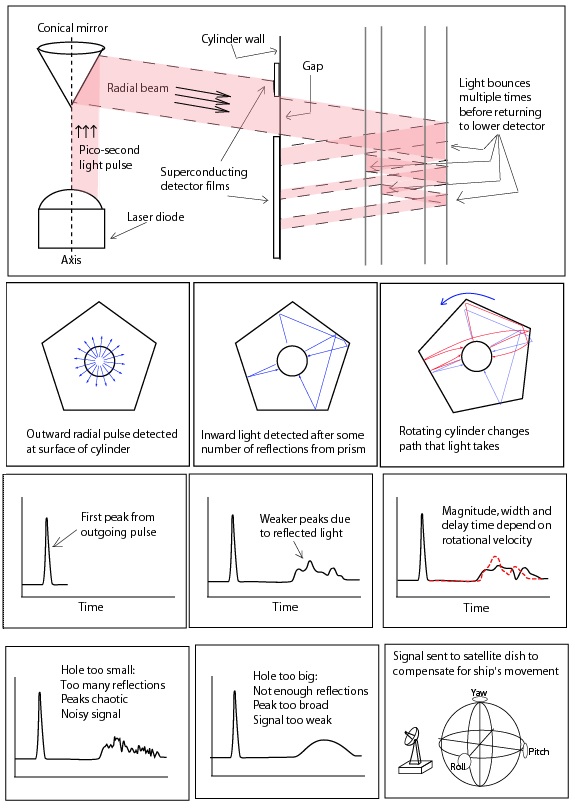 “I can see why they didn’t work properly”, he announced. “The silver paint on the outside is coming off in patches, and the superconducting film on the inside is much too thin – but I think the real problem is the diameter of the bore-holes – they’re obviously too small for efficient signal detection. But I think that with a little work we might be able to get things working satisfactorily.” Ernie instructed me to drill the hole out a bit in one of the prisms while he made a few ‘improvements’ to the electronics. “What diameter do you want?” I asked. But Ernie wasn’t quite sure - “Oh, just make it a just a little bit larger to start with – we can always make the hole bigger if we need to”. So I chose a drill at random, carefully enlarged the hole, touched up the outside (Acme Silver Mirror paint), and carefully re-applied the detector layer (Acme Room-temperature Superconducting paint).

When the paint was dry Ernie connected the reconfigured gyroscope to his 'portable-pocket-meter' with a flexible lead and tested it by spinning it between his palms. “Extraordinary”, he muttered, “I couldn’t have asked for better performance! You appear to have hit the sweet spot with the diameter of the hole you drilled”. Ernie explained that from the shape of the signal he could tell that at least some of the radial beam was bouncing off five external prism walls before returning to the detector cylinder light to bounce five times off the outside walls of the prism before it hit the detector, but none was bouncing six times or more. “Tell you what...”, he continued “I’ve got to go now, business in town, but why don’t you drill out the holes in the other two detectors to the same size, paint them up just like this one, and plug them back into the box? Then I can drop by next Thursday afternoon, pick you up, reinstall the satellite system on the boat and we can watch Season 3, Episode 1, anchored off Hurricane Point on Thursday evening”. And in his usual abrupt manner, he left the house without waiting for my reply.

Now I have just one problem. While waiting for the paint to dry I tidied up and put the drill bit back on the rack without checking which one it was. The drills were a gift from Ernie and go up in 1 micron intervals all the way from 0.1 mm to 12.5 mm (it’s a big set), and I just can’t remember which one I used. I have checked that the side length of each prism is exactly 10 mm. Can anyone help by telling me the minimum and maximum diameters I can drill to ensure at least some of the light will undergo at least, but no more than, five reflections?

mathematics geometry word-problem
Share
Improve this question
edited May 8 '17 at 1:34

Although I hate to disagree with Ernie, I think that he's made a mistake.

First off, in his diagram the holes shown are around 7.5 mm in diameter, not around 5.2 mm as stated. Doing my own simulations using the given maximum and minimum dimensions gives the following patterns of reflections:

As you can see, not just five or six, but up to 11 bounces are possible! Note that only one-tenth of the full circle is covered in these diagrams: rays hitting the other half of the first side result in a mirrored version of the displayed patterns, and hitting any of the four other sides results in a rotated (and possibly mirrored) version of these patterns.

I also computed what intensity pattern would be seen at the detector, assuming a Gaussian pulse profile a couple picoseconds long and an index of refraction around 1.4: 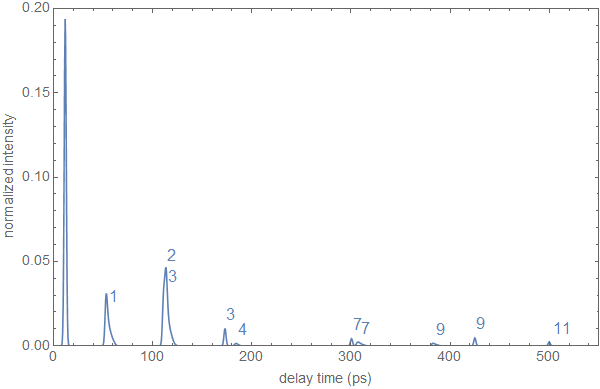 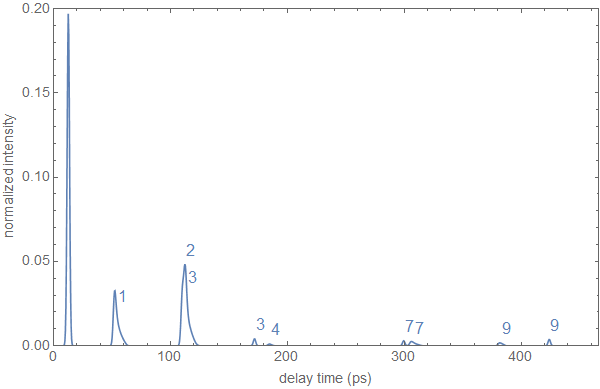 Now, making the assumption that the maximum number of reflections is monotonic in the radius of the central obstruction, I used simple interval bisection to try and find the radii at which five bounces are possible. However, as can be seen in the above diagrams, exactly five bounces do not occur even with a relatively small obstruction. Indeed, we find that between 7.529 mm and 7.530 mm (close to the diameters shown in Ernie's diagram) the maximum number of bounces transitions from 3 directly to 7!

The detector profile in both cases looks like this (although without the 7-bounce peak at 7.530 mm, of course!) 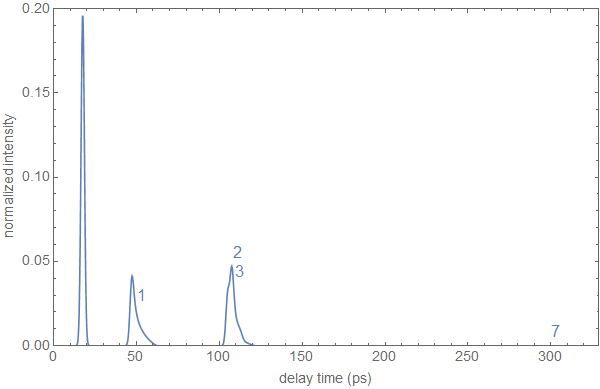 I'm quite confident in my calculations; I used Mathematica's ability to deal with exact algebraic numbers, so there is no rounding or approximation, except when generating the graphics; that is why the edges of some beams don't seem to be quite tangent to the circle. I also validated the behavior of the 7-bounce beam at 7.5 mm with POV-Ray (shown below), namely that it just misses the central obstruction after the fifth bounce (instead of hitting it, as depicted in Ernie's diagram). (Note that the POV-Ray image is mirrored compared to the Mathematica images, with the vertex pointing left instead of right; and that the two large reflections come from the 2- and 3-bounce paths.) 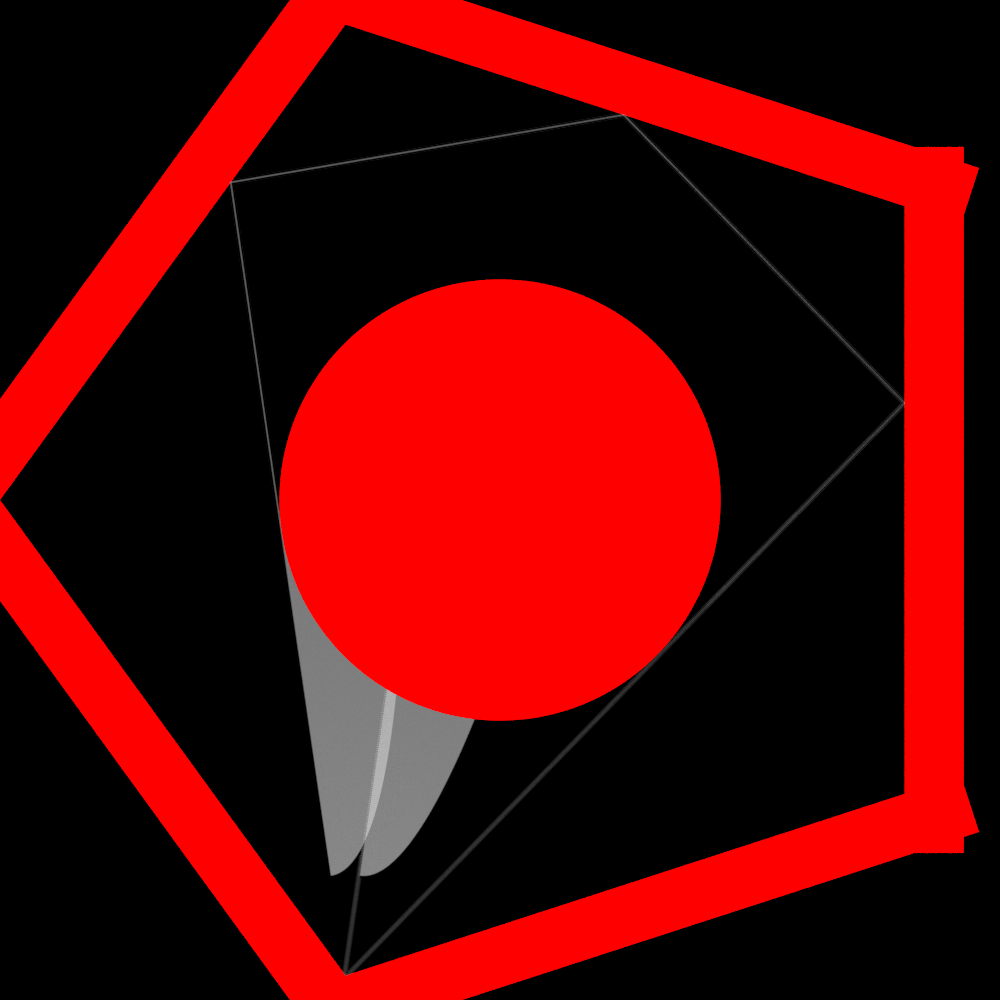 I hope you and Ernie can figure out what's going on in time for your next boating trip!

See comment added to 2012rcampion's post (and Ernie's comment): The weather has been dreadful this winter, so I had an excuse for not drilling out the prisms - it didn't seem as though we were going to need the gyroscope any time in the near future and, no matter how hard I tried, I couldn't work out what size drill would be appropriate. But just last week the weather report looked promising (and there is a new series just starting) so I knew I must do something. After checking here one last time, just in case someone had finally provided me with the solution, I dropped in on Ernie and confessed my mix-up with the drills.

Luckily - when I miss-drilled the hole it was smaller than required - so I was able to fix things by drilling it out bigger thanks to 2012rc's help. The diagram is still approximately correct, but I mistook Ernie's use of a thick blue marker pen as denoting a range of hole size (actual hole needed to be drilled to the nearest micron)

I rushed off in such a hurry to complete the work that I never asked how he worked that out so quickly. Guess I will never know... 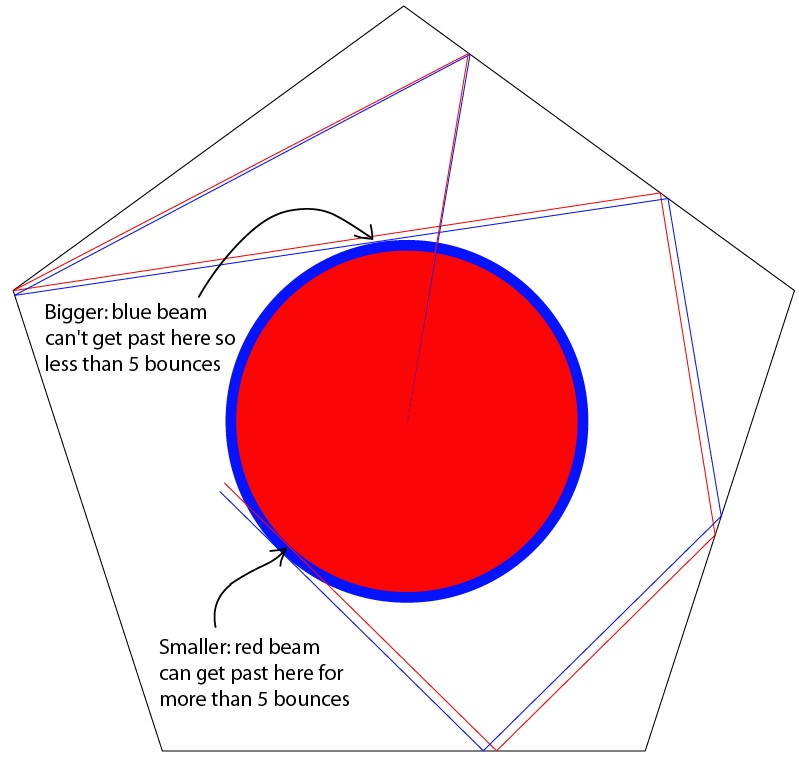 27
Ernie and the Pirates of the Caribbean