Last night you were enjoying a drink in the tavern. While keeping to yourself, you overheard the following conversation behind you:

Man 2: You've heard tales of the legendary treasure inside the mountain? Well it's all true! Once we get it, we'll be set for life.

Man 1: That's crazy talk. Countless adventurers have tried and failed. What makes us any better than them?

Man 2: The difference is that I know the secrets to get in. It all starts in this very town. You see, the town itself is the map.

Man 1: That doesn't even make sense. How can a town be a map?

Man 2: Look, read it like this and number the sections like so, then it's clear where to go!

Man 1: I think you've had too much to drink, this is all just nonsense.

Man 2: Listen, we can go somewhere more private and I'll fill you in on all the details. Just trust me on this.

Man 1: Alright, I've got nothing to lose but time. I still think we're chasing a fairy tale, though.

Intrigued by this conversation, you began searching for clues on this treasure. Figuring your best bet is to determine how the town is a key, you obtained a map of the town. 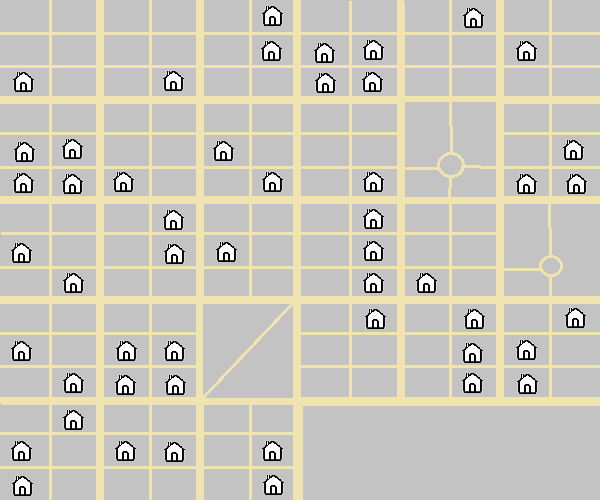 Written on the back of the map is the message, "Everything is not always as it seems."

Asking around, you discover a few interesting bits about the town. For example, it was created in 1026 AD, and the person credited with founding the town was a Mr. Francis B.

Continuing from where Doguita left off, I have decoded all of the messages in the adventure game.

Here is a map of the text adventure game. 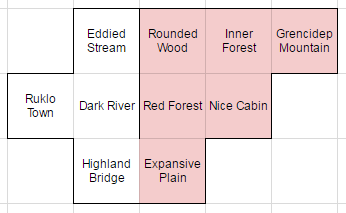 The areas marked in red are all enciphered: it seems that typing anything into the "answer" box and moving deciphers all area descriptions in Vigenere using that key.

(Of course, if it's not the correct key, it'll still be gibberish.)

The numbers given by the troll in Highland Bridge can be indexed into the description of Eddied Stream to give the letters B, I, N, G, O. That answer decrypts Expansive Plain: 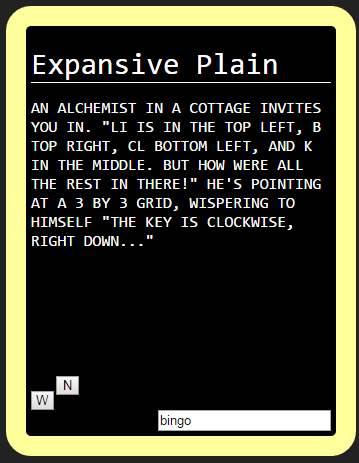 The previous hint refers to the periodic table and entering elements into a 3x3 grid... somehow. (I notice that placing the elements in a 3x3 grid clockwise lets Li, Cl, and B overlap with their stated positions, though it doesn't explain K in the middle.) 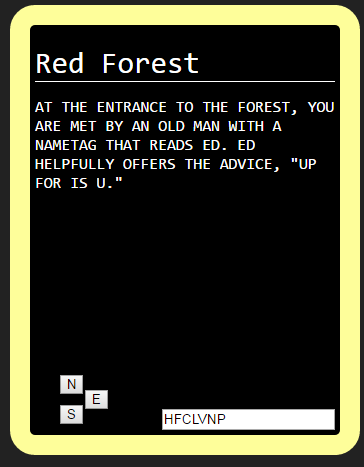 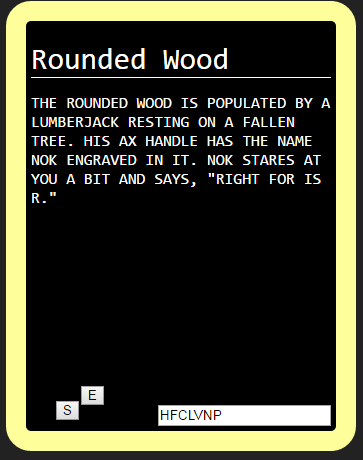 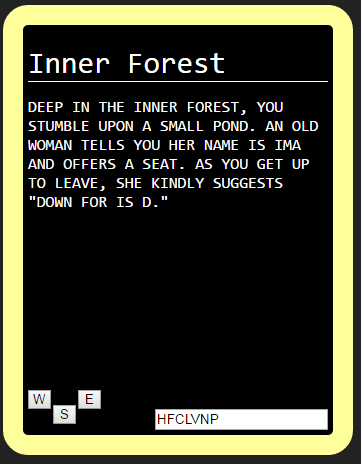 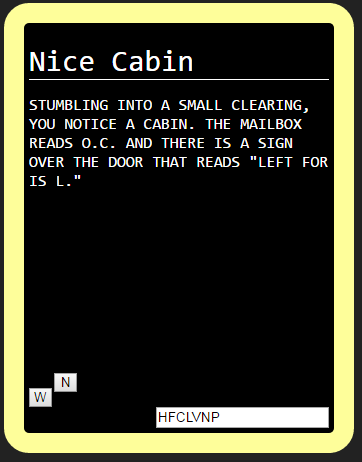 The four names (reading clockwise starting from the top left and going right) are NOK, IMA, O.C., and ED. Reversing and concatenating those gives KONAMI CODE, a famous cheat code.

The four people also told you how to substitute directions for letters. Doing that to the Konami code gives UUDDLRLRBAS, the key for Grencidep Mountain. 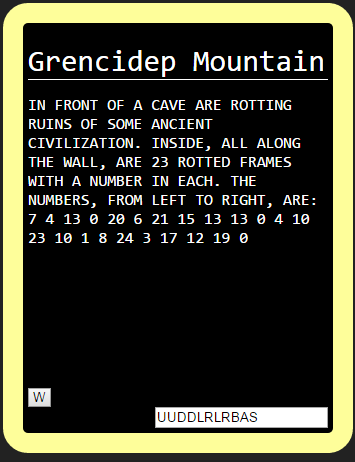 Over all, this didn't really seem metapuzzle-y to me. I guess it could be considered a metapuzzle (arguably), but just applying a bunch of Caesar shifts is... underwhelming, to say the least.

The unused information also irked me. Information that was unused:

Oh, and I wasn't entirely happy with in-story text (the numbers, said by a character) being related to out-of-story text (the Eddied Stream description, which presumably doesn't exist "in-universe").

I couldn't finish it so I am posting a partial answer:

It is like those classic text games but with ciphers!
Now I am stuck at Highland Bridge and the troll.
Perhaps another adventurer follow my path and find the next step.

The only section that was unsolved is the Expansive Plain, so allow me to answer that.

Next, switch them with their periodic numbers

Next is to fill in the empty spaces, which can be done by determining the number added to move to the next cell.

Now we can convert the outer numbers back to elements

Using the clue at the end of the text

Gives us the key

Try using the same process used on the Dark River...

Take the first letter from each location. See what you can make from that. It's almost in order in the javascript.

1 0 26 hinted at binary representations of 26 elements, Bacon also hints at "a system whereby letters of the alphabet could be reduced to sequences of binary digits"

Debated on making this more involved, but didn't end up using it. One idea was to make it a sort of Easter Egg to the classic Zelda dungeons, but that's a lot of rooms, meaning a lot of puzzles. Plus, I was hoping to avoid multiple directions after a puzzle, since the key decoding would get confusing (i.e. solve, then E goes to one puzzle and W to a different one).

Ended up deciding to use the location names and the number of locations was made to fit with that. Plus, I had a few of the puzzles ready that were too small to be stand-alone, and I didn't want to put too much more time into making more puzzles when I wasn't 100% sure on how well it would be received. I mean, it does use a github link, which I wasn't sure was accepted since they aren't reliable to remain unchanged.

Not the answer you're looking for? Browse other questions tagged enigmatic-puzzle treasure-hunt metapuzzles or ask your own question.