Most of this is is flavour, with a section of puns setting the scene at the start, and then the story itself in the middle. Scroll down for the actual puzzle. You may be interested to know that all the facts about the brain are true.

Everything in this story is true, except for the bits that aren't. That's probably not very helpful...

Someplace, somewhere, at exactly sometime before noon, there is a building which specialised in doing just one thing: being a hospital, university and medical research facility.

This medical building employed people. It employed chemists in their element, physicists of little matter and biologists studying blood cells, but in vain.

It made sure it didn't employ poets. The building had decided that anyone who writes inverse must be a backward person.

It did however employ mathematicians, the small fraction of the world who knew there was a fine line between a denominator and a numerator.

One of these mathematicians was employed as a maths teacher for the university students. He was such a good teacher, he actually could control the class and teach them things. He wasn't like the cross-eyed teacher down the corridor who couldn't control his pupils. He wasn't like the teacher in the room opposite who was rather average because he was so mean. And he definitely wasn't like the teacher upstairs who had problems which showed the first sine of madness. No, this teacher was a good teacher. He was also a doctor, and he was very good at that too. He never lost his patients.

Today he was teaching his students about mathematical fallacy. Quite illogical if you ask me.

The teacher turned and wrote What is 1+1? on the blackboard. He turned to the class and asked what was the answer. Someone shouted out "2!".

"Alright then, let me prove it equals 1."

He turned back to the blackboard and wrote the following: 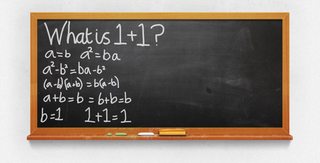 Now he looked at the class and was about to point out the mistake, where dividing by (a-b) is dividing by zero. He was though interrupted as a panting doctor burst into the room.

"Dr, Patient 3145 is awake and walking round the hospital."

The class stirred. Everyone had heard of Patient 3145. No-one knew who he was, just that he had been trapped in an icy lake and suffered extreme brain damage. The doctors, including the teacher, had tried some experimental treatment on him and it had worked. But with some side effects.

During his coma, his brain had shown signs of hyperactivity. His treatment had greatly increased the rate of neurogenesis, usually very small in adults, and as a result, instead of losing around 7000 neurons per day, the average amount for an adult over 20, he was gaining a couple of thousand. This in turn was opening up new neural pathways, allowing quicker thought and reactions, more control of the body and the ability to multitask. Not only this, but his axons were firing quicker across synapses, neurotransmitters moving faster and information being transferred quicker. He was now estimated to be the most intelligent human in history.

On the few times he had woken, he hadn't done that much, but he had shown signs of heightened intelligence.

In the end however this treatment would be a failure. The reproduction of brain cells was causing immense pressure on his brain, which would eventually shut itself down.

But now it seems he had woken and had gained enough strength to walk. And as if on cue, he walked into the classroom.

Everyone fell silent watching him. He walked up to the board, looked at it for a second, then picked up a chalk. For a few seconds no-one could see what he was drawing, but then he stepped away and walked out of the room to reveal a beautifully intricate pattern: 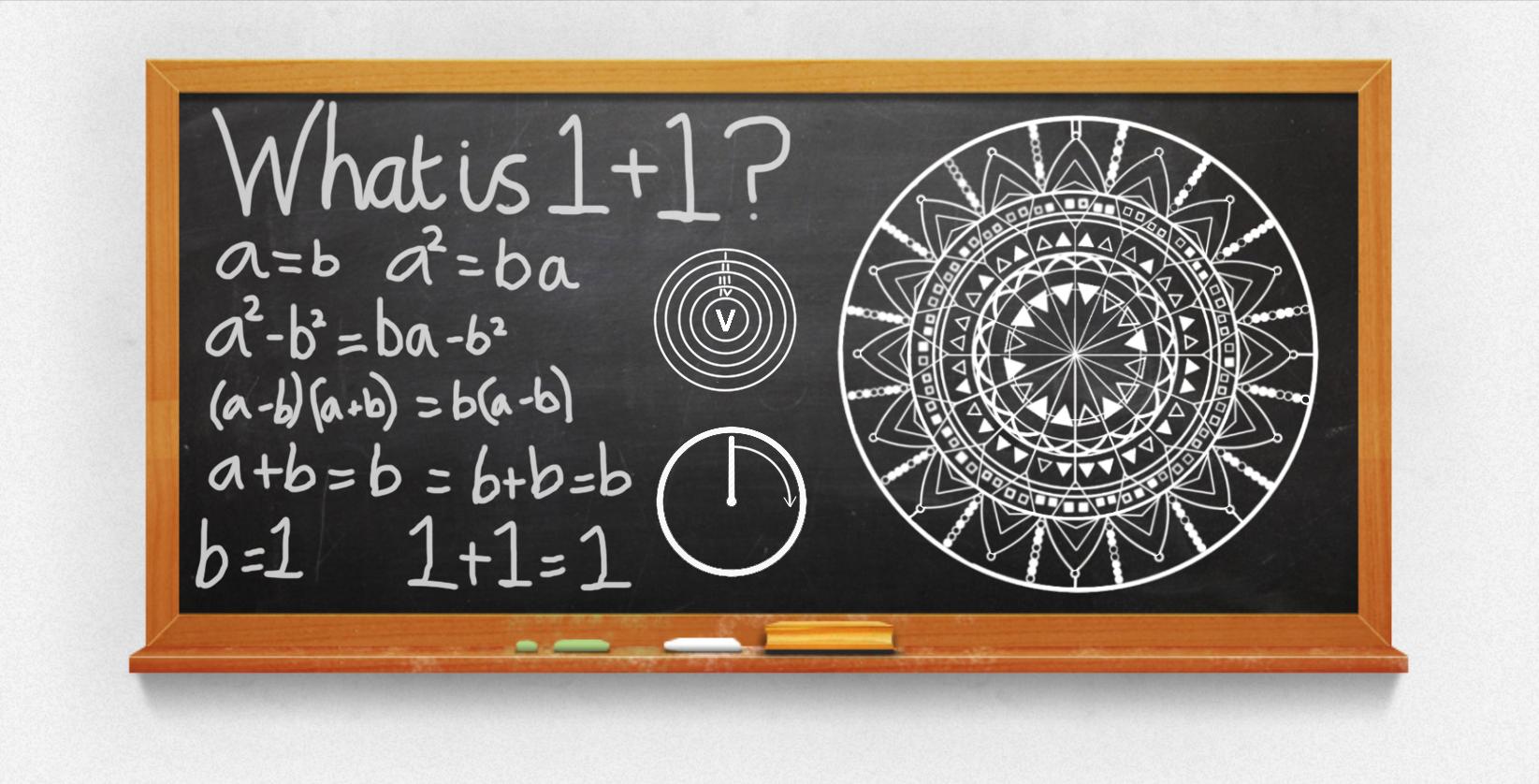 (Click for a larger image of the main pattern, image has been updated to give a hint and to fix an error)

The students nor the teacher could work out its message. Maybe you can?

Something like Excel can create something useful to do with what ChrisHappy found in his answer (3x16) which can be filled with information from the triangles. Then you have the final answer.

Try filling a 3x16 grid in with the triangles 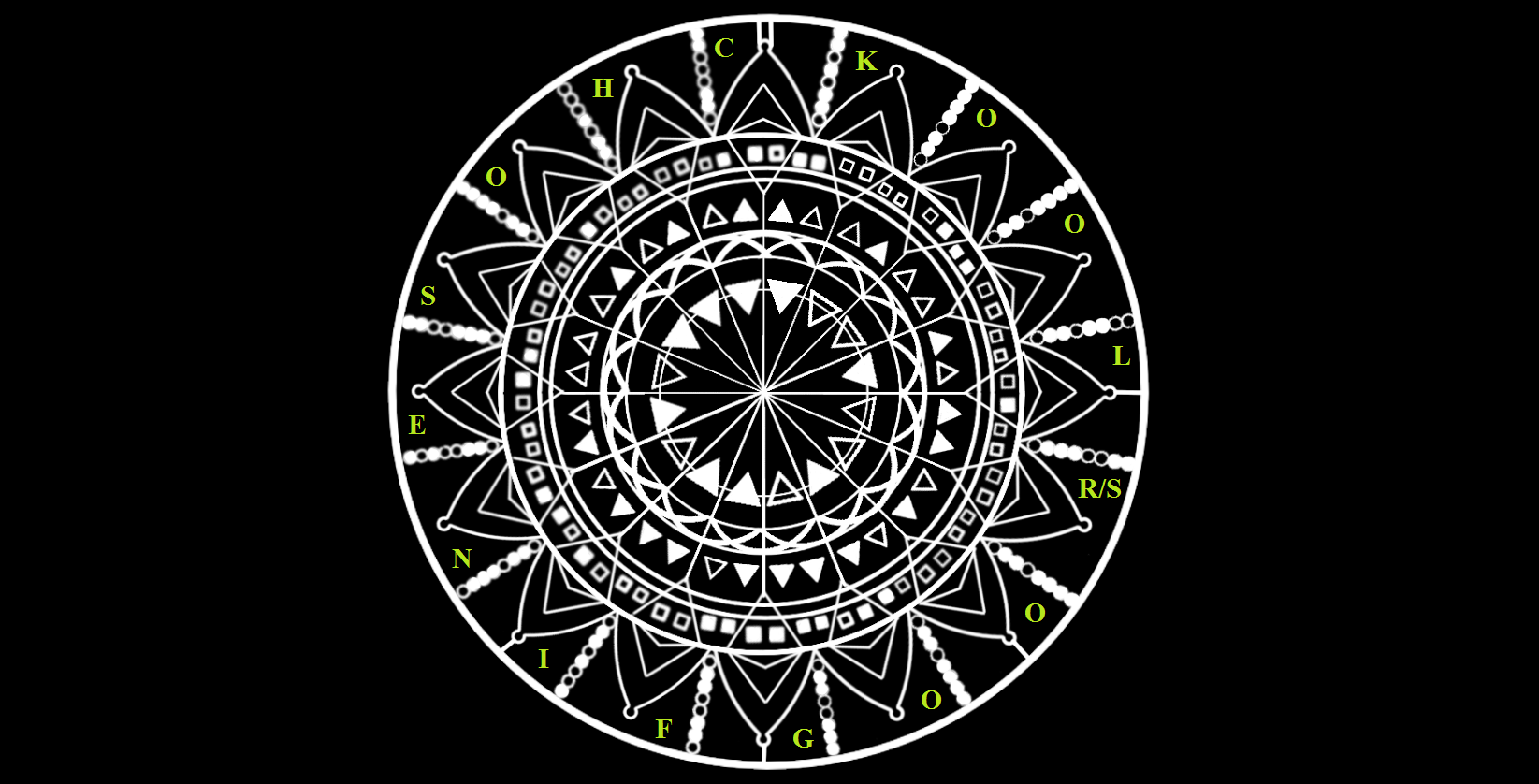 OP confirms, there might be a little error where S should have been R. (OP: Now corrected image) Which gives - CHOSEN IF GO OR LOOK, which was meant to be LOOK OR GO IF CHOSEN

This means, we need LOGIC to solve the next step.

Next step with the help of Chris's answer here -

Utilizing LOGIC Gates and treating the white squares as 1 and black as 0, and applying NOR logic from the symbol in the picture we get -

So, the second part leads to 3x16 = 48
Which leads to the number of triangles left which is 48

The bigger hint reveals that we need to fill the triangles in a grid of 16*3 with Black and White blocks. But here's another trick. We need to interpret filled triangles as Black while empty ones as White as they represent NOT gates.

Doing this we get -

This is a great answer by Tech, but I'll clarify a couple of things.

The two circles to the side of the main one show you where to start and which way to read. One circle has I on the outer ring, taken works in through the rings up to V. This is indicating that you start on the outer ring of the circle and move inwards. The other circle points to 12 o'clock and indicates clockwise. This is telling you to start at 12 o'clock on the main circle and read round clockwise.

You get the NOR gate from the symbols on the outer ring with the sets of binary. That is the symbol for the NOR gate, so the outer ring gives NOR LOGIC.
Applying that to the next wrong gives you the size of a grid. Next filling it with the triangles, but inverting the colours because a triangle represents the NOT gate, you get the final answer.

I came up with the answer after seeing a poster saying

'There are 10 types of people in this world, those who understand binary and those who don't'

And thought it the perfect starting point for a puzzle. Hope you enjoyed :)

(If you are still unsure on something or want me to make something clearer, ask me in the comments)

Through hint and a techy idiot ;) 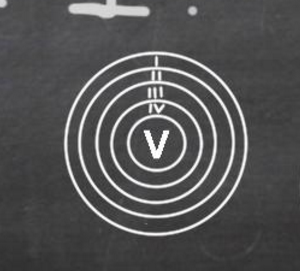 Displays the code number of values in Roman Numerals: I, II, III, IV, V (Zoom in)

Displays the order which to decode the code: Clockwise.

Through @Techidiot's answer, we got the first solution: LOGIC 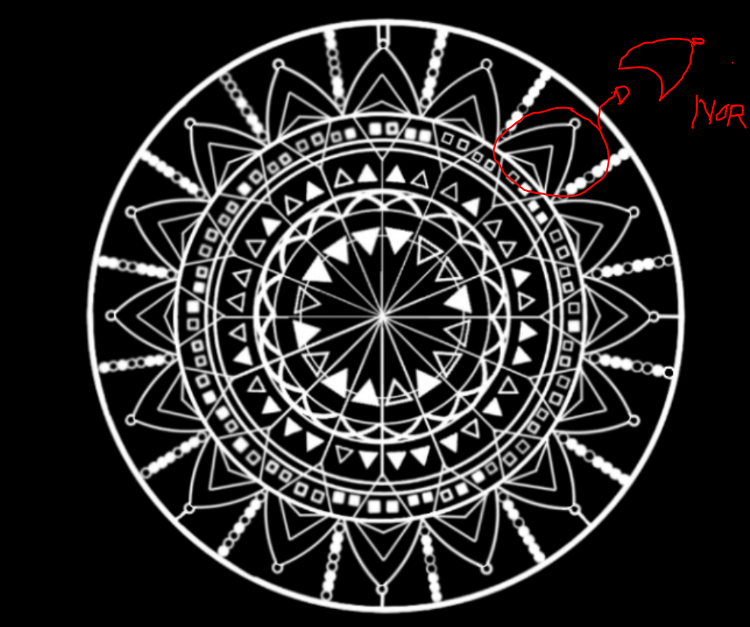 The two digits hinted that it would not be binary and the hint hinted that it had something to do with logic. Used this JSfidle to play around with them.

Since no one else has mentioned it yet, the issue with the algebra is that since b=1 (step 7) and a=b (step 1), then

(a-b) = 0 so the process to get from step 4 to step 5 involves dividing by zero, which is an illegal operation.

No idea if this has any bearing on the final solution, but it's worth noting.

An addition to Techidiot's answer:

In formal LOGIC the letter V is used as an OR operator, for example 1 v 1 = 1. Not sure what the "LOOK OR GO IF CHOSEN" means. Either 1v1=1 is the answer or perhaps this goes further and this is a way to continue.

Not the answer you're looking for? Browse other questions tagged cipher wordplay enigmatic-puzzle steganography or ask your own question.

2
Leet of Legends
13
My aristocratic friend
14
To each his own
19
Oh God! help me
11
Sheerluck Helms and the STRIKE Assassin
4
Who's the sweetie?
1
Who is Pete's favourite scientist?
4
What timezone am I?
9
Sequence Puzzle - First Question of 42