Missing, 'till the very end

You wake up in a stark corridor, with a fully illuminated ceiling, black walls and large square white tiles the width of the corridor tiling the floor. Looking around, you notice a small piece of paper on the floor:

You decide to head down the corridor. Looking in front of you, all the branches are to your left. You reach the end of the corridor and turn left. Immediately, you spy another piece of paper.

You notice that the adjoining corridors are again to your left, and the walls and corridors alternate, same width each time. At the end of your corridor, you realised you've gone up a bit. There is a person sitting on a box, crying about not having something, sitting on the crack between tiles just as you step into the corridor.

On the second tile after the person, you find a pair of glasses on the floor in a red dot. After one more is another corridor, to the right. Two more, and you are at the end.

You turn left again, into a descending corridor. Another slip of paper waits ahead, and a red dot with a picture book lies in front of the first corridor you come to:

do PUT IN a bent oval, with singing

You notice that apart from the paper, the dot and the slope, this corridor looks identical to the 2nd corridor you went through. Coming to the end, you find yourself back where you started.

You turn around and turn right into the middle corridor at the dot. Someone who claims to be a hairdresser and complaining about your hair is on the tile just before the intersection at the end of the corridor.

You turn left twice, then right. Another slip of paper is on the ground:

You come to a 4-way intersection, but keep going up. You are forced to turn right three times, finding three more slips of paper:

You reach the end of the hallway, but it's a dead end, so you turn around and turn left at the next tile. At the intersection is a red dot with a few pieces of hair on it.

At the end of the hallway is a teenage girl, complaining about feeling sick. You turn left again, and find some paper saying:

At the end of the hallway, you turn left, heading downhill. One tile to your left at the next corridor is a scientist gabbling about something that was taken, but you keep going straight. Another slip of paper tells you:

morning after a confused fox TRIES to prevent starvation

You turn back down the hallway, right at the end and then left two tiles later, down yet another corridor. Thinking about the last few corridors, something seems familiar about them.

You turn three times at the ends of corridors, picking up the papers as you go along, thinking that this definitely looks familiar.

the RELATION within is a conflict
Depart Being Without Doing s
brown HASHES talk extensively
SOUNDS like A good, moving greeting

You come to another dead end, so you turn around and turn left. At the second last tile of the corridor is a red dot with some buckyballs and a piece of charcoal, and coming down to the last tile you find an old man who is feeling the walls and floor with his hands. You turn left, then realise you're back to where you started.

You think over everything you've seen. You realise that even if you could take each person straight to what they wanted, each other's needs and wants would get in the way. And even if you took them out, there'd still be something missing.

You wonder how you can get out. You think back over where you've been, and realise that one of the corridors had a keyboard, and a screen with an input field and title "Missing, 'till the very end". You can't remember where it was, but you can't bear to be in this maze any longer than you need to be.

The next step is in the 2nd-last body paragraph.

Not given on chat:

First we figure out where we are and how the pieces of paper work:

Talk of "black walls and large square white tiles", as well as the ensuing directions, indicate that we're on a crossword grid. The pieces of paper correspond to cryptic clues.

At first the cryptic clues appear to be missing enumerations, but trying to solve a few of them leads to the realisation that the number of uppercase letters in each clue gives the enumeration.

Piecing together a map of our location and solving the papers' clues happened in parallel. Answers to the clues are at the bottom of this post.

The map had to be done in pieces, since instructions like "You turn left twice, then right." move you to a completely different area and make it hard to follow on. However, with a little back-and-forth, the instructions and clues were just detailed enough to give the final layout: 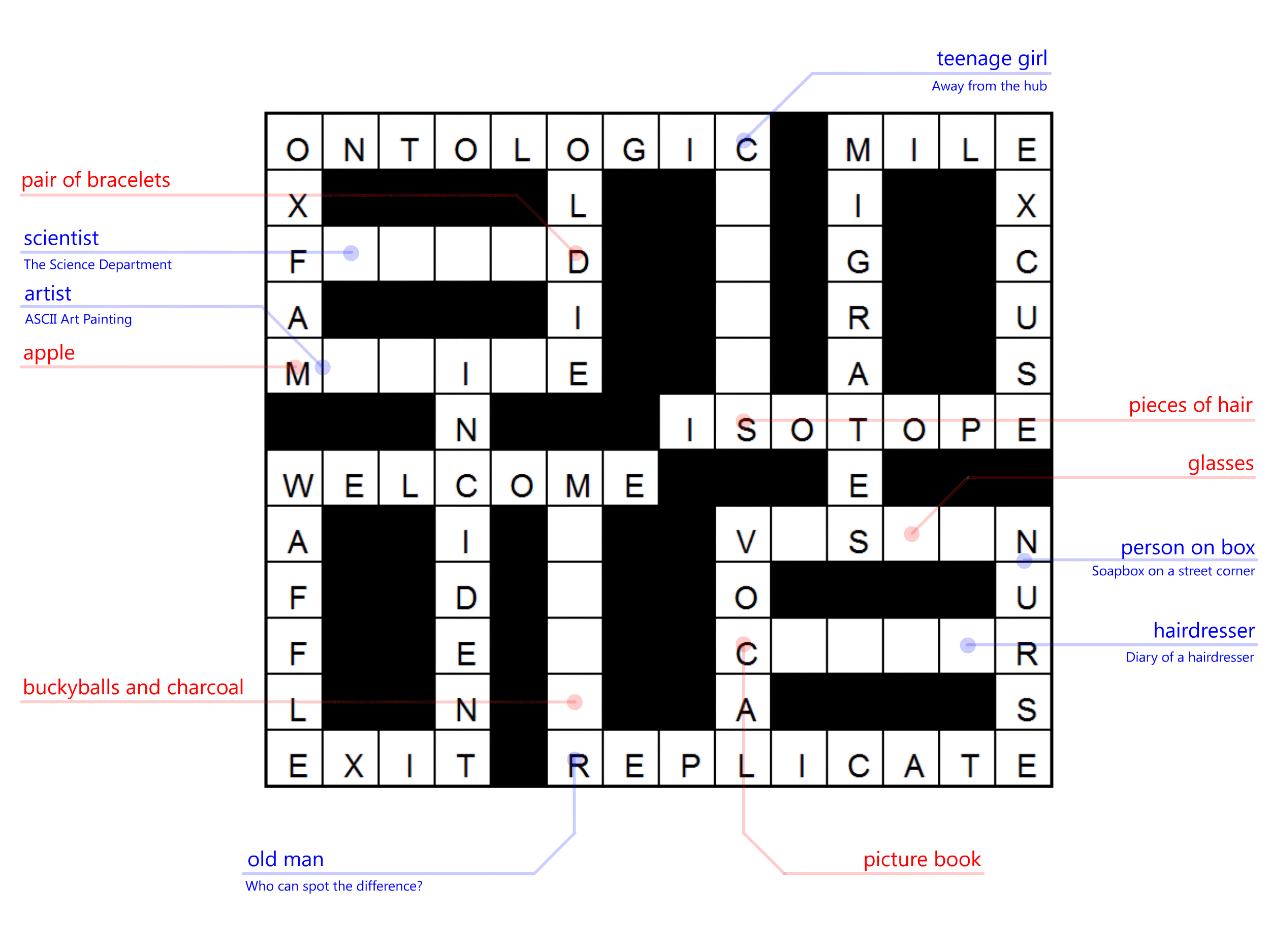 The starting point is the REPLICATE corridor.

Now comes the metapuzzle part. The solutions to the six linked puzzles are:

Soapbox on a street corner - LONELY
Diary of a hairdresser - STRAIGHT
Away from the hub - NOMOPHOBIA
The Science Department - VACUUM
ASCII Art Painting - B&W (BLACK AND WHITE)
Who can spot the difference? - HE IS BLIND

Using these answers, as well as the items by a red dot, we can now complete the map:

We fill the six remaining spots in the crossword with each person's "needs and wants". Each of these spots has an item with a red dot on one of the word's squares, as an additional hint to the missing item. 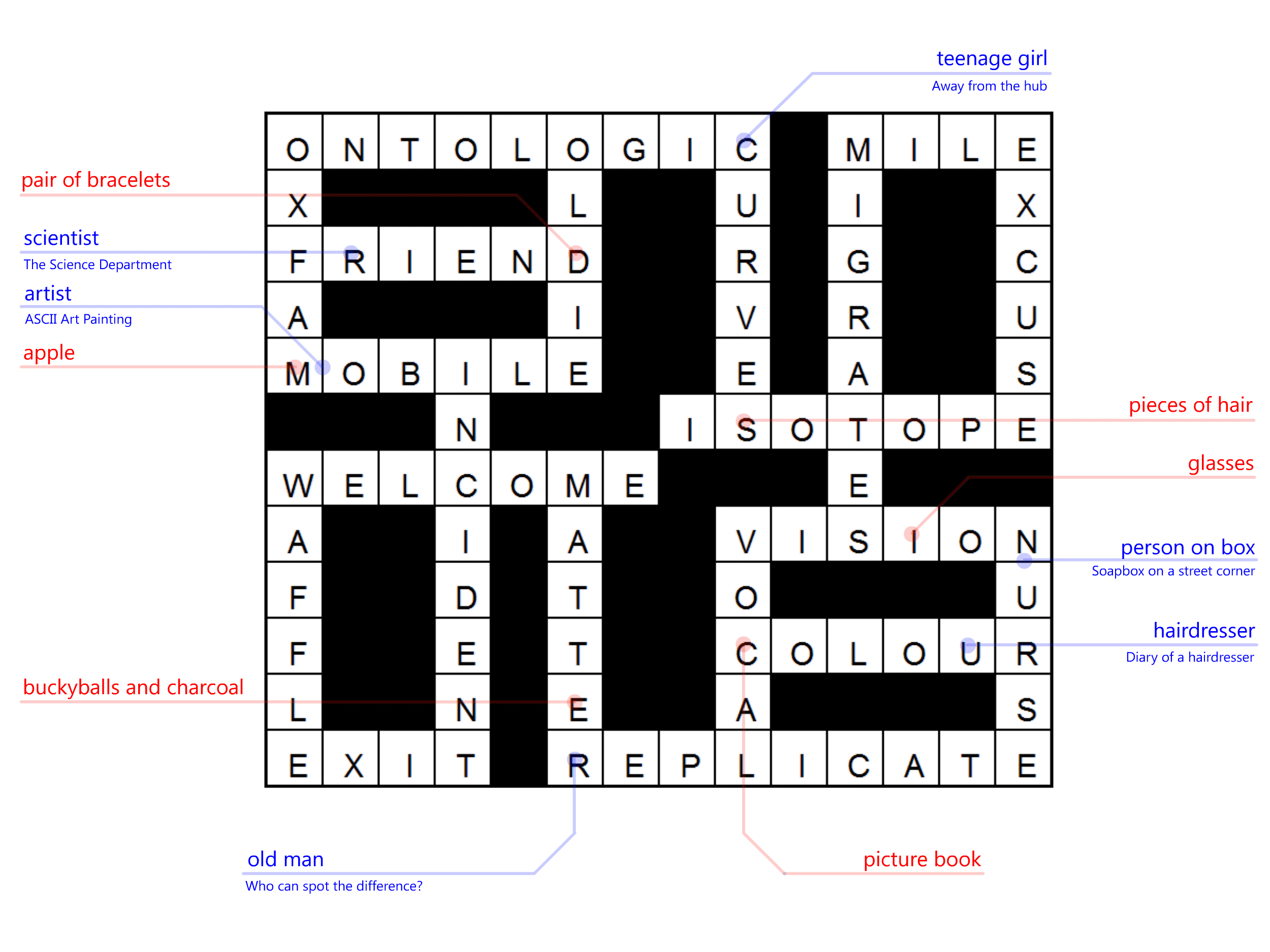 The "pair of identical bracelets" are FRIENDship bracelets, and the "apple" refers to the technology company Apple.

The next part we need is "You realise that even if you could take each person straight to what they wanted, each other's needs and wants would get in the way.", which is indeed true:

If you connect each person to their item via a straight line, someone else's item will be in the way. 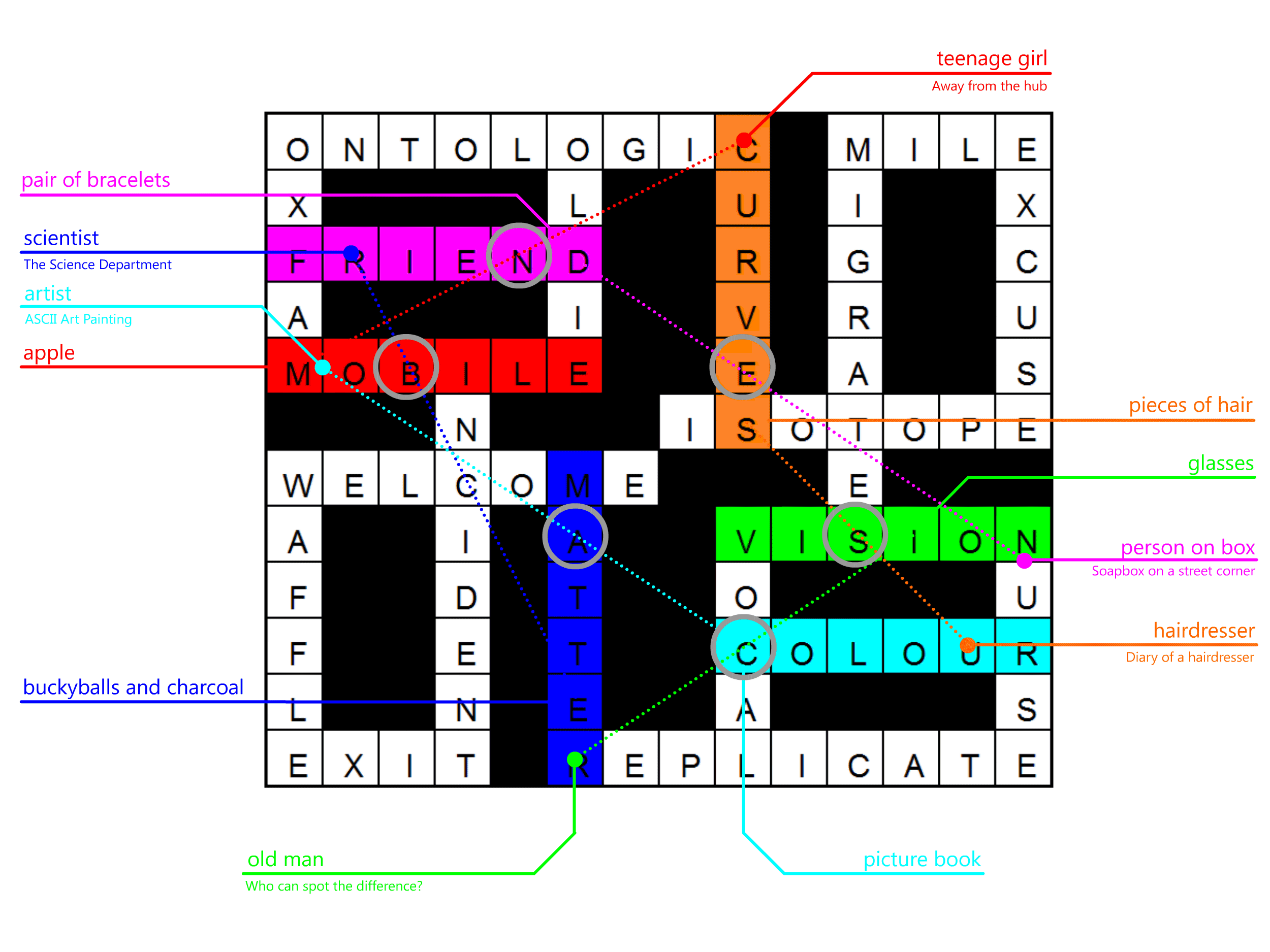 The part that follows, "And even if you took them out, there'd still be something missing.", tells us how to get the answer:

Take all the blocking letters ABCENS then add something to it. Specifically, adding the letter O and rearranging gives the answer BEACONS

What's that? That doesn't seem like the answer? I'm only kidding :)

Adding the letter E for EXIT gives the thematic answer ABSENCE. We enter this at the EXIT corridor, which is in the bottom-left of the crossword grid.

(Thanks to @Deusovi for the help with solving!)

do PUT IN a bent oval, with singing

Atom's form IS a RING with a small shark

ONTOLOGIC ("questioning existence") = ONTO ("surjective", as in an onto/surjective function) + LOGIC ("boolean algebra")

morning after a confused fox TRIES to prevent starvation

the RELATION within is a conflict

Not sure, presumably INCIDENT from cross letters.

Depart Being Without Doing s

Overall comment: The clues mostly had nice and fair wordplay, but suffered a bit when it came to definitions.

• "Lengthy" does not sufficiently clue MILE as it is an adjective, which MILE is not.
• I'm not sure whether "questioning existence" sufficiently clues an adjective here, but admittedly ONTOLOGIC is not an easy word to define. I did like the use of "surjective boolean algebra" in this clue though, as it almost sounds like a plausible mathematical topic.
• "Tries to prevent starvation" is close but not quite right for OXFAM, in the same way that "barks" would be a strange definition for DOG. It's preferable to include a noun part that indicates you want the organisation, e.g. "group that tries to prevent starvation". However, as this is a bit wordy, I'd personally go with a definition like "charity" instead here.
• The above comment also applies to the IE ("used to browse") portion of OLDIE. The OLDIE clue also has an additional pluralisation problem, where OLDIE is singular but "good old songs" is a plural, and it is also strange for OLD to appear verbatim in the clue.
• Ignoring the awkward "S" in the surface, "Depart being without doing S" is also weird in its incorporation then removal of ING. A neater way to do this might be something like "leave LIVE, ignoring start of song" for EXIST - S (as opposed to EXISTING - S-ING).
• "Brown hashes" seems like a strange definition for WAFFLE, both due to meaning and a pluralisation discrepancy.
• For "Sounds like a good, moving greeting", the WEL- part is fine, but "moving" → COME doesn't fit. Even if it were "move" → COME that still wouldn't quite make sense - "move closer" or "approach" would be preferable.

Not the answer you're looking for? Browse other questions tagged enigmatic-puzzle story cryptic-clues metapuzzles network or ask your own question.

29
Diary of a hairdresser
20
Away from the hub
19
Who can spot the difference?
5
The Science Department
5
Soapbox on a street corner
6
ASCII Art Painting

4
What is the largest, compact connected-network polyomino for these tiles?
28
A-maze-ing Wordsearch
13
The maze of letters - Clue Three
5
The [redacted] showing off their skills - Clue Nine
18
The Ooh-Aah Cryptic Maze
5
The Science Department
20
The Corridor of Eon Syras
9
Detention in 1997
23
C equals O, but in general
51
There are 2,001 doors leading to 2,001 hallways. How quickly can you find the way out?