Megan and the chess game

It was a bright sunny day of the sort that we occasionally get in this part of the world (it was the fifth Friday in March). In the park was a van advertising its wares under the banner "Hyper Ices", and that's where I met my friend Megan, who was wearing a beautiful light summer dress.

"What lovely hot weather we've been having", I said.

"Yes -- my husband and I have got the table out on the patio. The other day we had a game of chess out there."

"Well, not very well -- he beat me, as usual. He took a photo shortly before checkmating me. I've got a copy of it here."

Megan retrieved her mobile from one of the many pockets of her shoulder-bag, and showed me. Now, however good her husband was at chess, he wasn't all that good at photography -- how washed out the colours were in that bright sunlight! There was Megan, wearing a dress in white and gold (or at least I think those were its colours -- it was hard to tell), and there was the board. 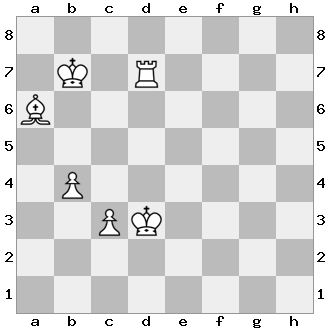 I could tell which way round it was because it was one of those with file-letters and rank-numbers round the edge, but... I couldn't tell which of the chessmen were white and which were black.

"Yes, it does look like you're in a tricky position" I said, as I pondered the position.

"Honestly, how could I have let him get into that position?" she replied -- then it struck me -- I could work the colours out and also a bit of the previous play.

"Anyway by that stage I knew I was losing," she went on, "and he mated me two moves later." I didn't know that before, but, yes, I could see that there was a way a checkmate could happen that soon.

Since the rook and the bishop are in a threatening position for both kings, they must belong to the same color. I can see but one explanation for this: 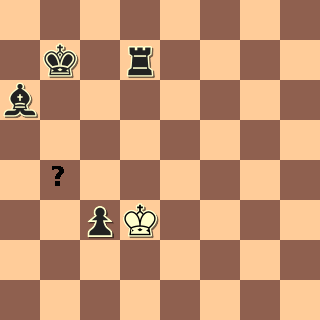 and the last step was

an en passant capture from d4 to c3. This is what gives away the color of every piece except the pawn on b4. Of course, this also implies what the last three single moves were.

As to how a mate in two was possible from here, let's assume the colors were like this: 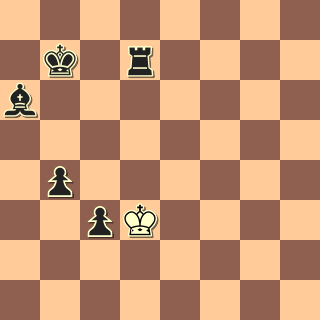 Then Megan could have been mated with:

As Tyler Seacrest noted, the white king was checked by the bishop before the en passant. Black must have discovered that check, and he could do so only if the b4 pawn was black. Actually, this is what the 3rd half-move before the photo was. (Yeah, I'm not very good at counting. Sorry.)