A (not so) simple question! 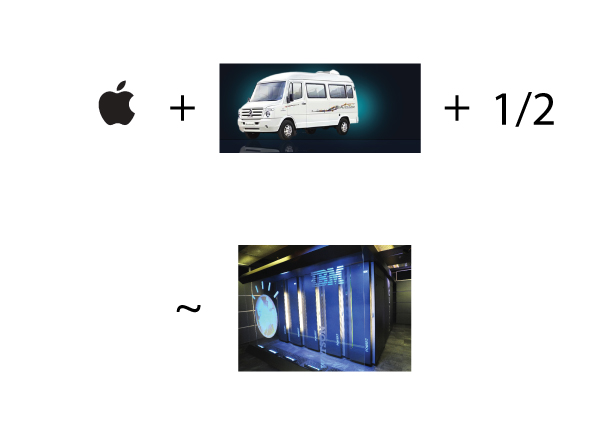 Can you solve this one!? Hints will be provided after some time!

The van refering to mobile

And half could be half of one previous whole word. Take (about) half the letters away from apple and you get app

The lower photo seems to be a photo of the ibm super computer Watson and the wavy symbol infront represents almost ** or **approximate.

I believe the image is making reference to a mobile app being, or has been released for apple giving access to computations using Watson. Article about it here.

The final message is either

Connect your iPhone to IBM Watson.

The Apple logo stands for "Apple".

The vehicle stands for "mobile".

The division (divide) stands for "device".

You get an Apple mobile device or an iPhone.

You have the connect symbol with IBM Watson.

Not the answer you're looking for? Browse other questions tagged visual rebus connections-puzzle or ask your own question.

21
What is the cipher behind this circular cyphertext?
47
What is the title of this modern art painting, if not "Stars and Stripes"?
7
Find the Rebus in the Rebus
12
Emojiture Challenge - Next Generation
32
Question the solution: a question
15
Yet Another Simple Rebus
14
A Riley Rebus As Suggested By Duck
4
Connect Wall V. S. Word Web
15
Grid of evens and odds