This is one of those grid puzzles that I simply cannot fix. Here is the puzzle:

One of the most popular features of the children's TV show Pumpernickel Place is the antics of the Floppies, especially the monstrous Monsieur Mixedupicius. Each of the five fluffy Floppies is best known for one particular characteristic (one loves bananas, one is Bertha's "bestest friend", one lives in a closet, and two are known as the "gorilla next door" and the "karate-kicking krazy"). Each Floppie also has a different distinctive color, either black, blue, green, orange, or red. The men and women who portray the Floppies are Frank, Georgia, Jim, Melanie, and Tony; their last names are Beard, da Vinci, Dix, Gresham, and Lopes. Can you find the unique characteristic and color of each Floppie, and determine the full name of the performer who plays him, her, or it?

11.The Floppie who practices karate (who is not red) is not played by Lopes.

12.Beard's character does not live in a closet.

This is the most annoying logic grid theme I’ve ever encountered.

Mixedupicius is black, loves bananas, and is played by Tony da Vinci.
Felix the Grump is red, lives in a closet, and is played by Georgia Gresham.
Bertha is the blue gorilla next door, played by Frank Lopes.
Ernestine is Bertha's orange best friend, played by Melanie Dix.
Tiny Turtle is green and karate-kicking krazy and played by Jim Beard.

Let’s start by establishing the grid, which in response to your now removed question is undoubtedly the most comprehensive way to solve this kind of problem. Combing through the clues, we can discover the names of the five Floppies:

We can then place these on a five-axis grid with the other attributes. We will assume genders as indicated. 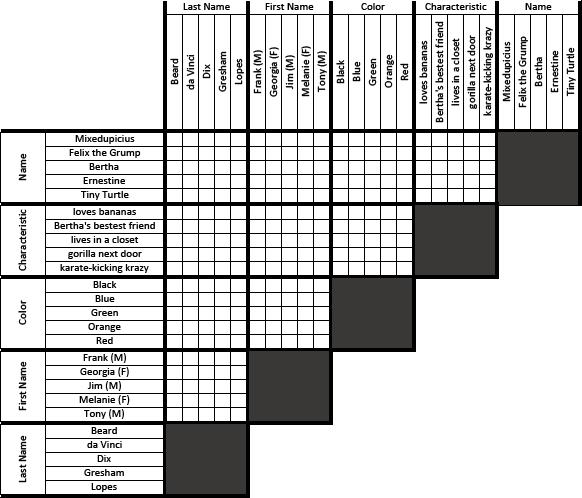 Clue 1 is the only one in which all information cannot be immediately entered into the grid. Since the five different people span different attributes, we will use different colors along the border for each one, and place an ‘x’ at all intersections. Besides direct statements, the following genders are implied:

Here is the grid with information from all clues inserted. 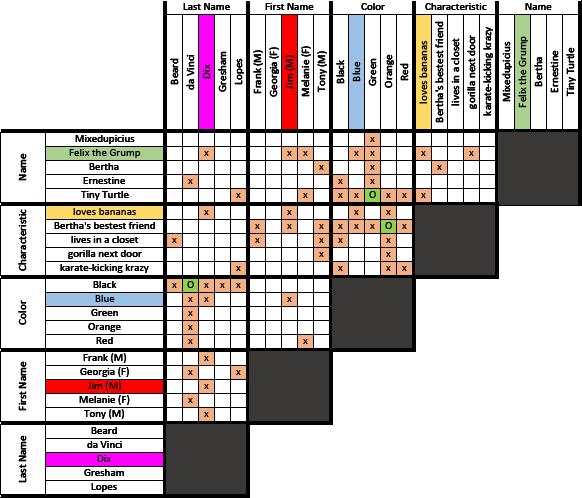 We can start by focusing on our definitive placements, and cross-referencing x’s so they match between attributes. For example, since da Vinci is black and da Vinci is not Georgia or Melanie, therefore the black Floppie must also not be Georgia or Melanie. After making these deductions, we have the following grid. 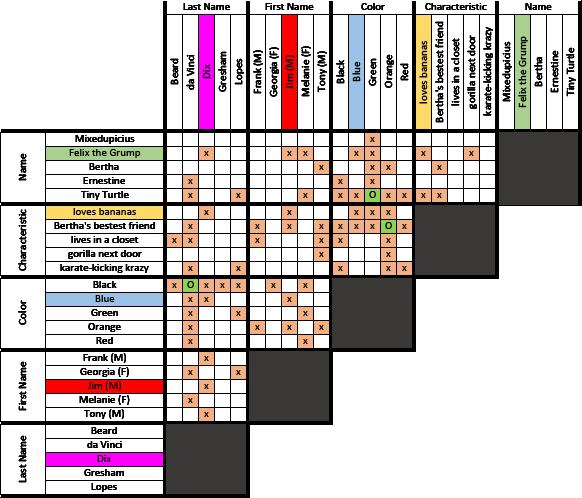 Next, we must go back to clue 1. Since the five Floppies are all named by different attributes, the five different colors along the top row must be associated with five different names. Because Tiny Turtle cannot be Blue, nor love bananas, Tiny Turtle is either Dix or Jim. Therefore Green must also be Dix or Jim. Implications like this are somewhat hard to visualize with cell background colors, so let’s shift our entire grid over and add a sixth axis, assigning a letter A through E to each Floppie. Since we have the Letter axis, we don’t need colors at the edge of borders anymore. 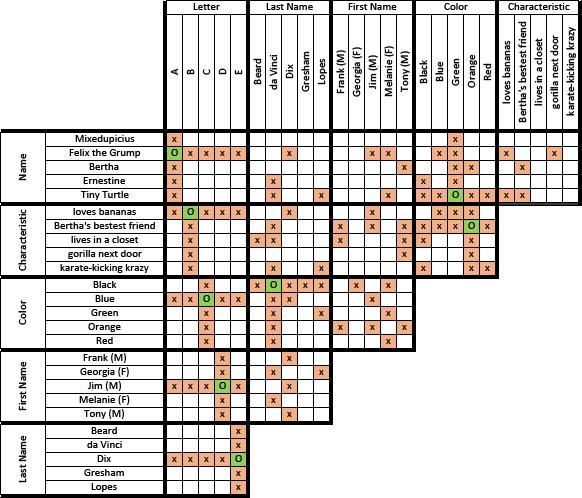 Just as before, let’s cross reference x’s between attributes for our letters. 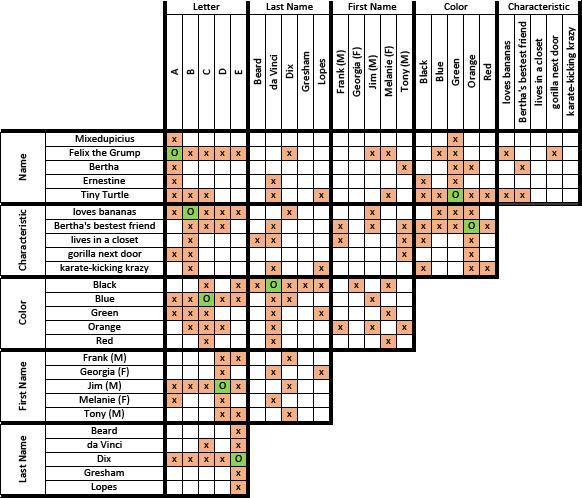 Now we’ll have to bifurcate. Let’s look at an intersection of attributes which has a large number of x’s, such as Color and Characteristic. Let’s set cases F1 and F2 for the character who loves bananas being black or red, respectively. Either F1’s are all O and F2’s are all x, or vise versa. Through intersection with O’s, we get the following result. 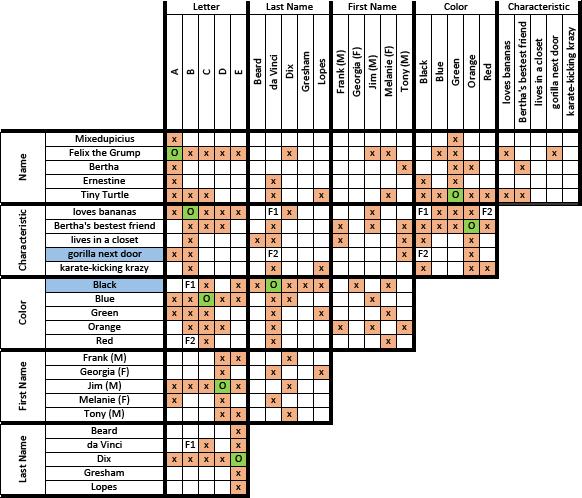 x’s would be transferred between the blue shaded rows if F2 were true, leading us to deduce that if da Vinci is black, that Floppie must be D (Jim). We can label the necessary results of each branch with lower case f1 and f2, as their value is not determined in the other branch. In other words, if F1 is O, all f1’s are also O, but if F2 is O, f1 could be x or O. 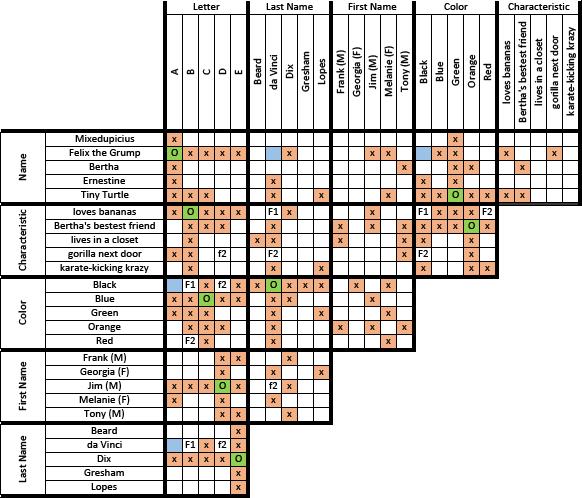 We can place x’s on all the blue shaded cells because if they were ‘O’, they would eliminate both halves of our bifurcation. That gives us a few more f2 placements, which I’ll color code for different Floppies. 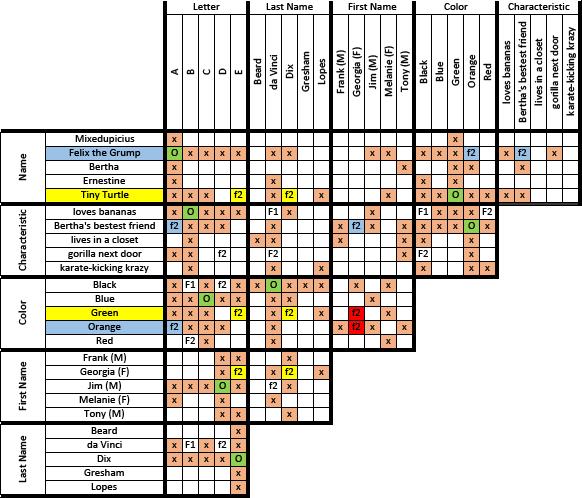 At last, we have a contradiction.
If F2 is the case, then Felix the Grump is orange and Bertha’s bestest friend. Overlaying x’s from the blue shaded rows means Felix the grump would have to be played by Georgia. F2 would also imply that Floppie E, Ms. Dix would be Tiny Turtle, forcing her to be named Georgia as well. Georgia would be playing two Floppies.

Therefore we can conclude that F1 is true. 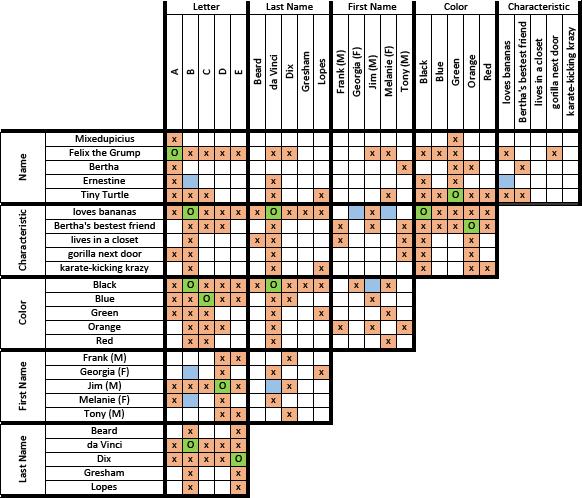 Once again, we can cross reference our x’s, and place an x in each of the blue shaded cells. Since Georgia and Melanie were the stopping point of our last trial and error, we’ll start at the intersection of Color and First Name for the next bifurcation. 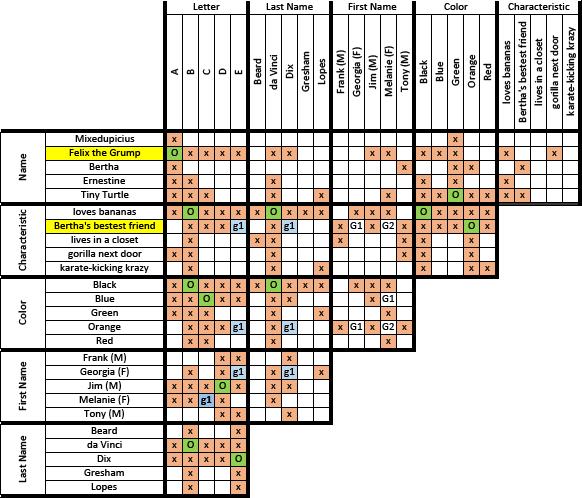 In both forks of our bifurcation, it is impossible for Felix the Grump (A) to be Bertha’s bestest friend:

Therefore, in both branches, Bertha’s bestest friend must be Dix (E). 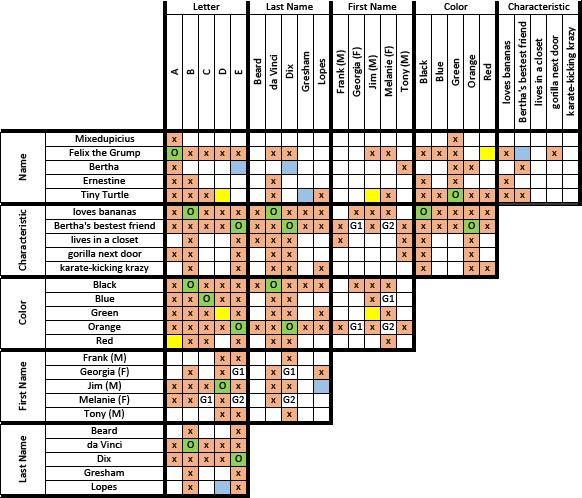 This finishes our correlations between color and letter, giving us a few definitive O’s (yellow) and cross-referenced x’s (blue).

Let’s set up another bifurcation with the black Floppie being played by either Frank or Tony. Some implied deductions for each branch bring us to this point. 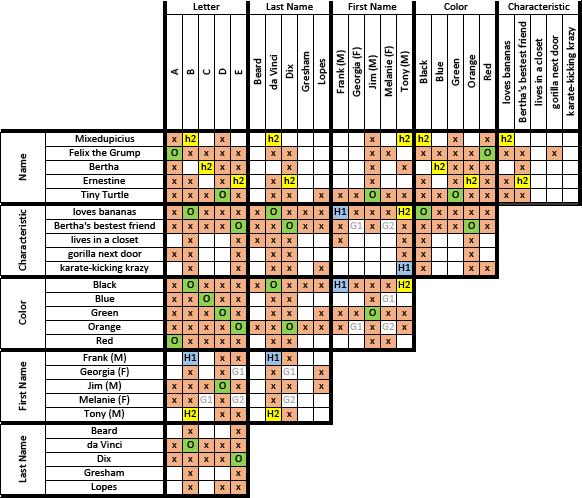 Cross-referencing between color and name limits Tony to being Blue in case H1. H1 then forces G2, which forces Tony’s last name to be Lopes, which creates a contradiction, as karate-kicking krazy cannot be Lopes. 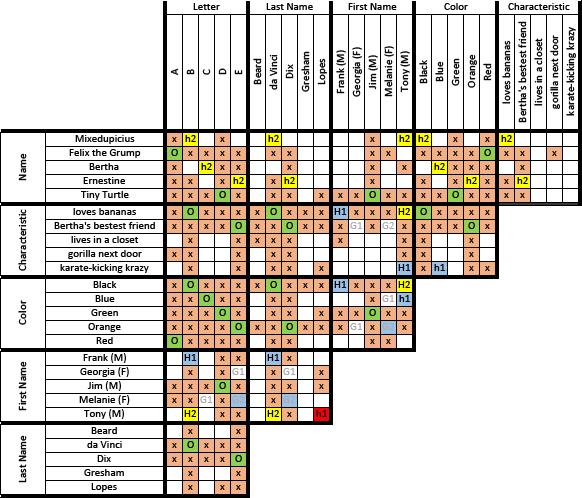 Therefore we know H2 must be true. 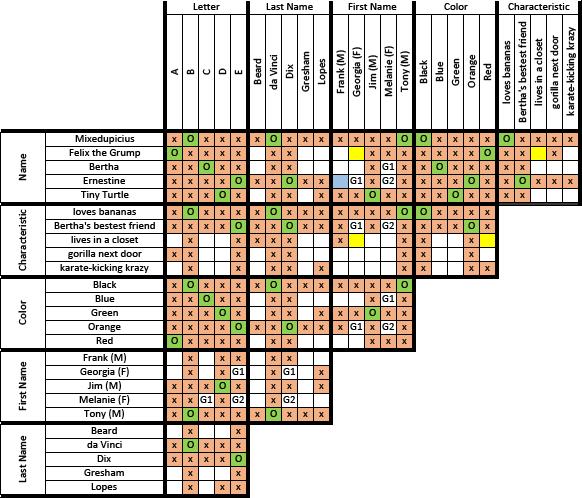 Let’s go ahead and cross reference. Since Felix is Red, he cannot be karate nor gorilla, so he must live in a closet. This means he must be played by Georgia, resolving our first bifurcation with G2. The rest of this puzzle can be solved by cross-referencing. 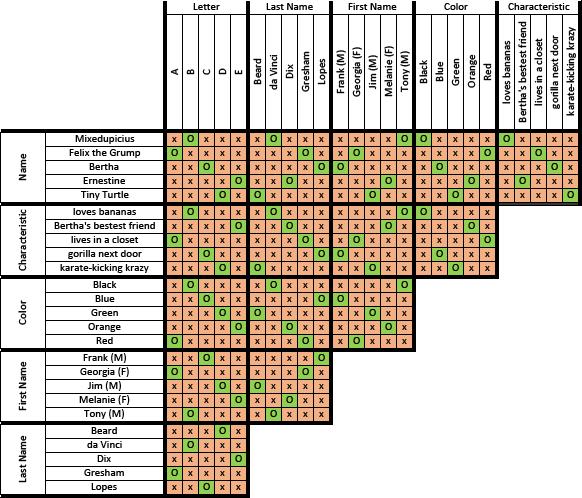