This is an entry into the 29th fortnightly topic challenge - Retrograde Analysis.

Alice and Bob were playing a game of Sudoku-Janpu.

Alice: I win.
Bob: (looking at the board) Oh man, not again!
Alice: You could have won before; I made a mistake.
Bob: Really?
Alice: (pointing at the board several times) See, if you went there instead of there I'd have had no legal move ... I should have gone there instead of there.
Bob: Aw... that makes it even worse! Want another game? This time I'm going to win.
Alice: (chuckles) We'll see about that!

This was the final position: 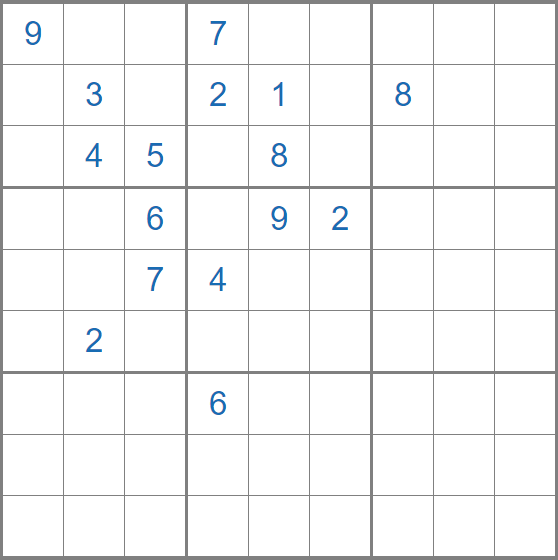 For you to work out:

How did Alice win? How could Bob have won?

Sudoku-Janpu is a 2-player game played on a blank sudoku grid. Janpu means jump in Japanese.

Alice's last move must have been

the 9 in the top left corner

the 4 lying southeast of that 9.

the square at the top left of the centre-left 3x3 box. Call it S. This has four neighbours, all of them squares Alice moves to at some point. After she moves to the last of these, Bob can move to S, at which point Alice has no vacant square to move to and Bob wins; and this is what Alice is referring to when she says Bob could have won.

infer very much about which of those she actually moves to last, or when -- quite a number of different sequences of moves are consistent with the diagram in the question -- but after some discussion with @boboquack I have confirmed that the above is what he was wanting to see :-).

Not the answer you're looking for? Browse other questions tagged combinatorics sudoku retrograde-analysis or ask your own question.