Sudoku embedded in a Kakuro

In addition to standard Kakuro rules, the grey shaded cells must form a valid Sudoku solution. 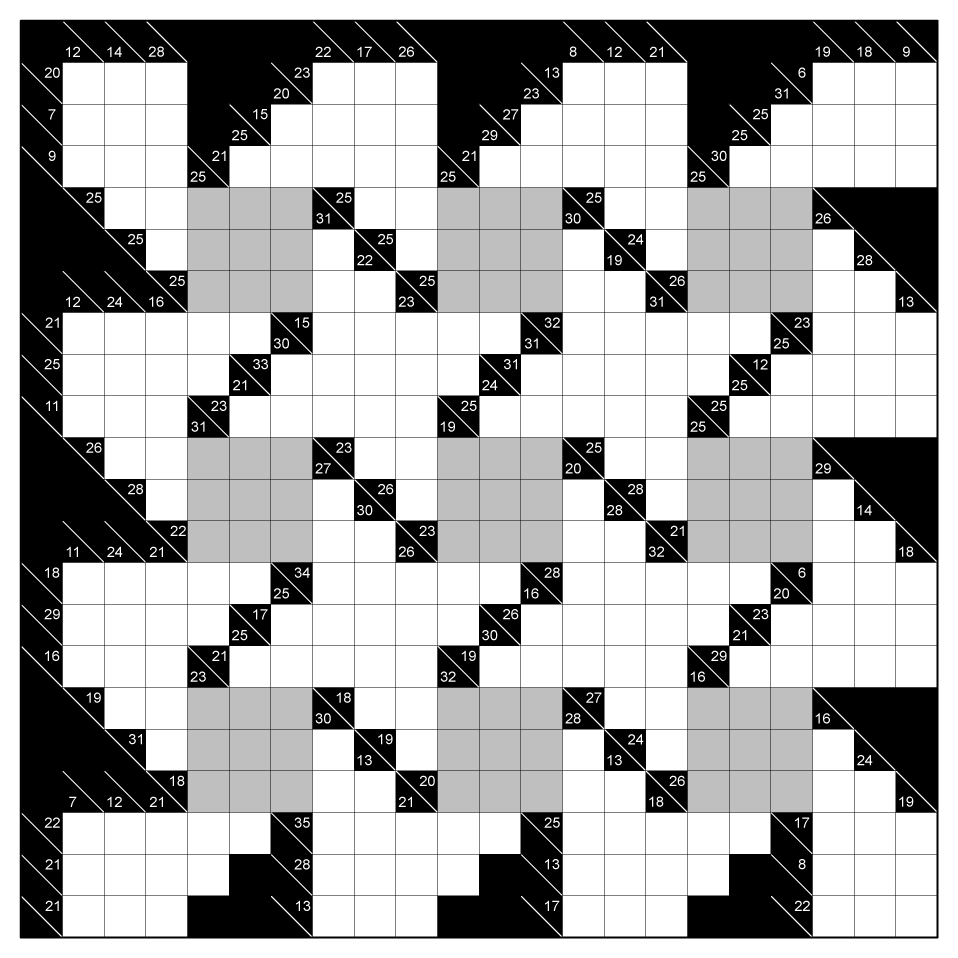 One sum in this puzzle has been corrected from 28 to 23. Fortunately, it was in a location that nobody has resolved yet, so everybody's progress up to this point is still valid. My apologies.

If you are building on a previous solution, please verify that you are working with the correct grid. See this grid for the circled correction.

Looking at the right column of the top middle and bottom middle sudoku sqaures, we can find that there are only possibilities for 6 unique numbers. That is, 123456. 6 unique numbers over 6 squares means that those numbers must be in those squares (in some order). This gives enough information to place 789 in the remaining space in the middle square.

Furthermore, 1 and 5 must occur in the right column of the top middle square. That only leaves a feasible remainder of 6 and 2.

We have determined the column of the 9 in the middle square (right), and the kakuro clue now contains a 9 that overlaps the middle column in the top middle square, the the 9 must be in the left column there to complete the sudoko. By elimination, the bottom middle square, centre column must contain a 9. 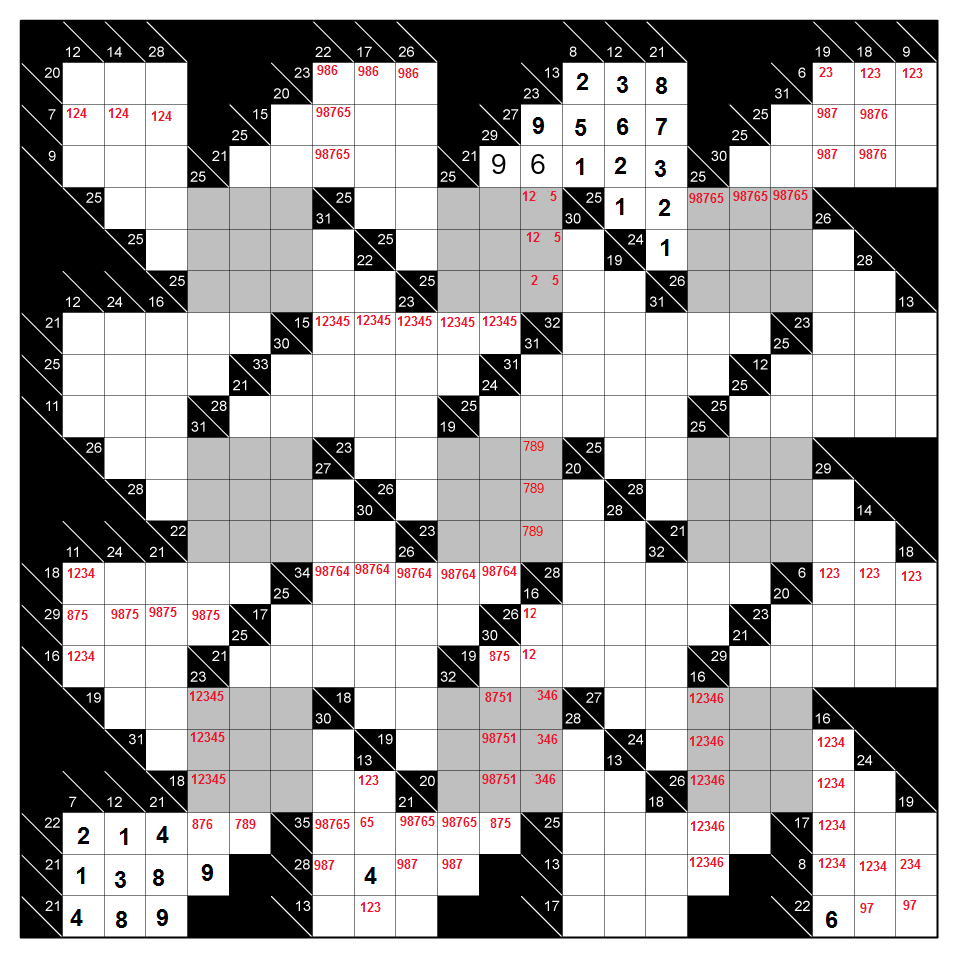 More results. This was filled in by searching for where 1's are valid in the columns. I think it's right but I need to check the working again. 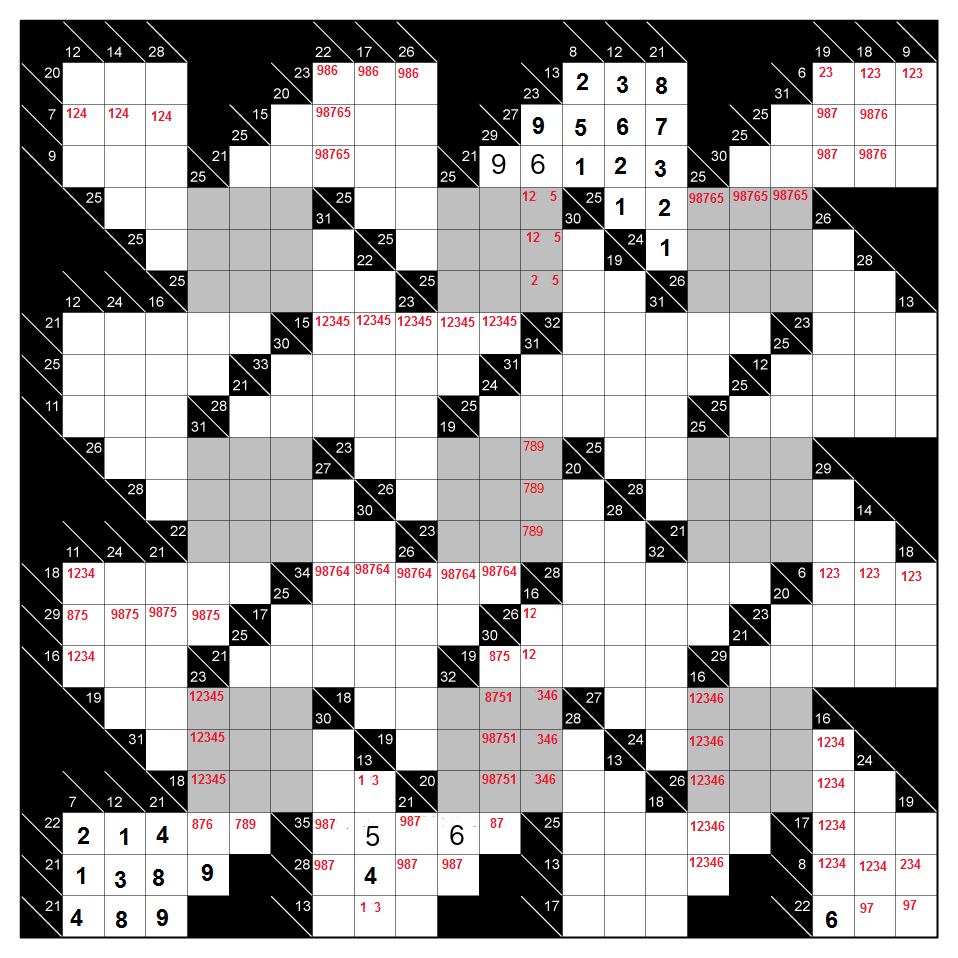 The final solution is 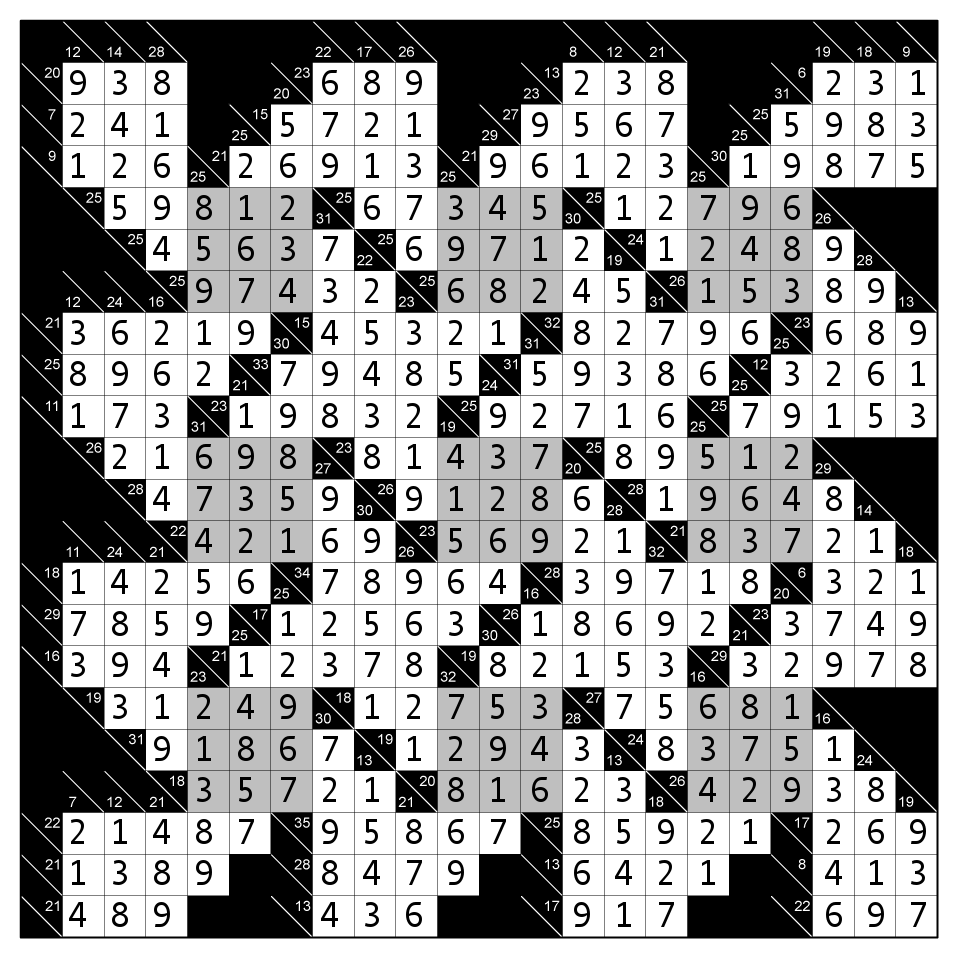 Kakuro is a game about sums, so to progress we need to check the sum of areas which are not necessarily just rows and columns. We also know that each sudoku row, column and block has a sum of 45. With some double counting we can deduce the sum of several 3-block areas: 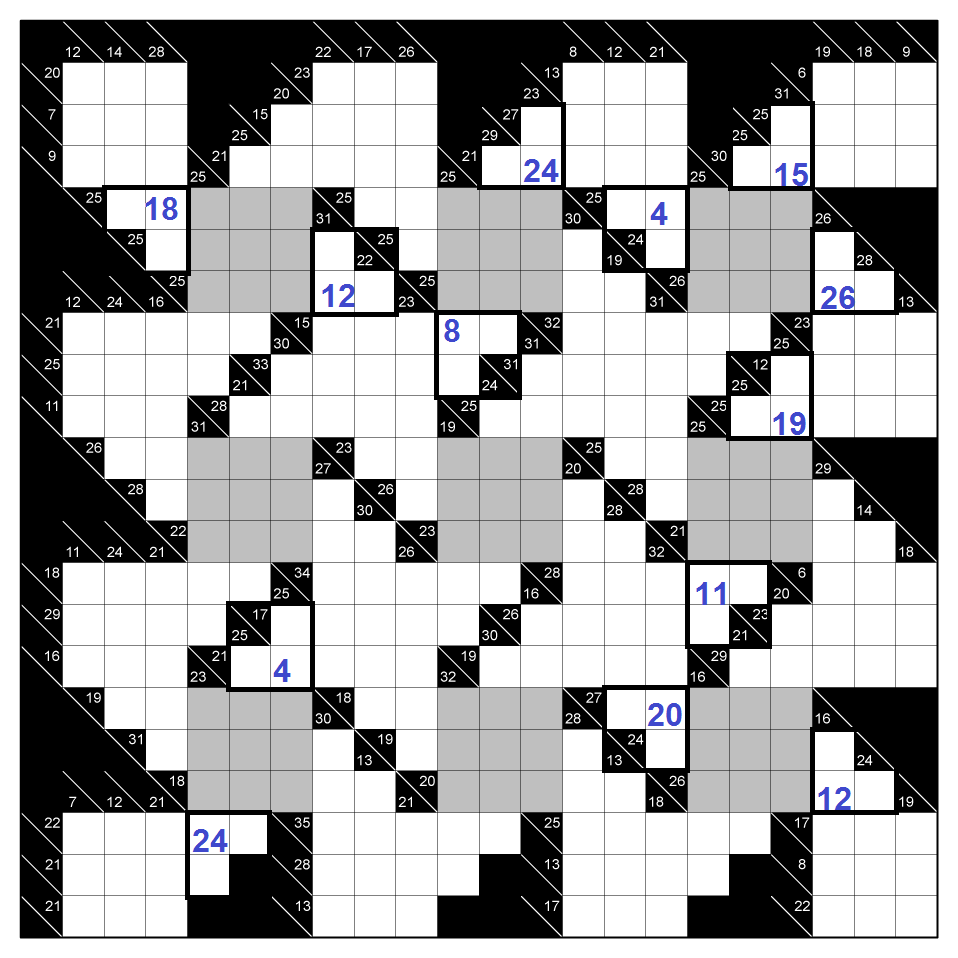 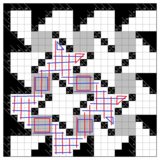 sadly a contradiction. Even though the areas cover the same squares, red gives a sum of 545 while blue gives a sum of 550. This makes the puzzle unsolvable. Hopefully this is just a typo from the asker.

The typo was fixed and we can go on. My pictures still use the old grid including the typo. Filling in all the 3 block areas that have a sum of 4 or 26 gives us 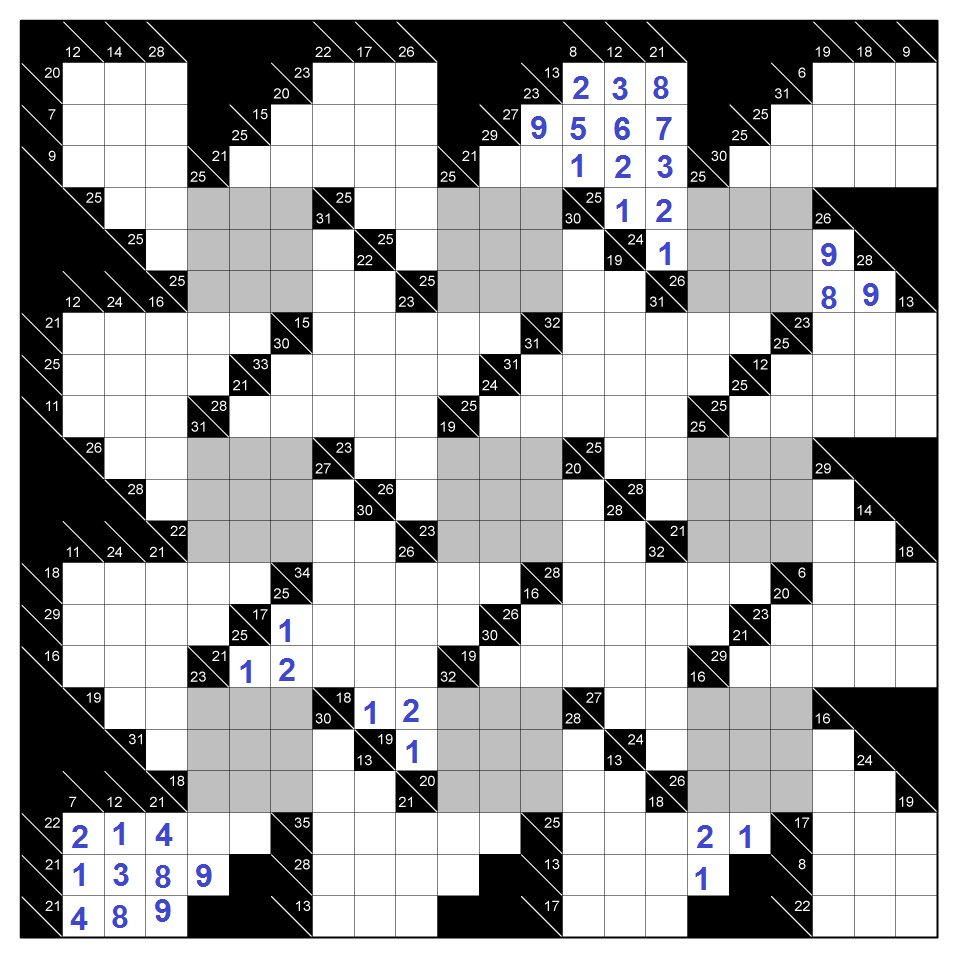 Now we can solve some of the kakuro hints 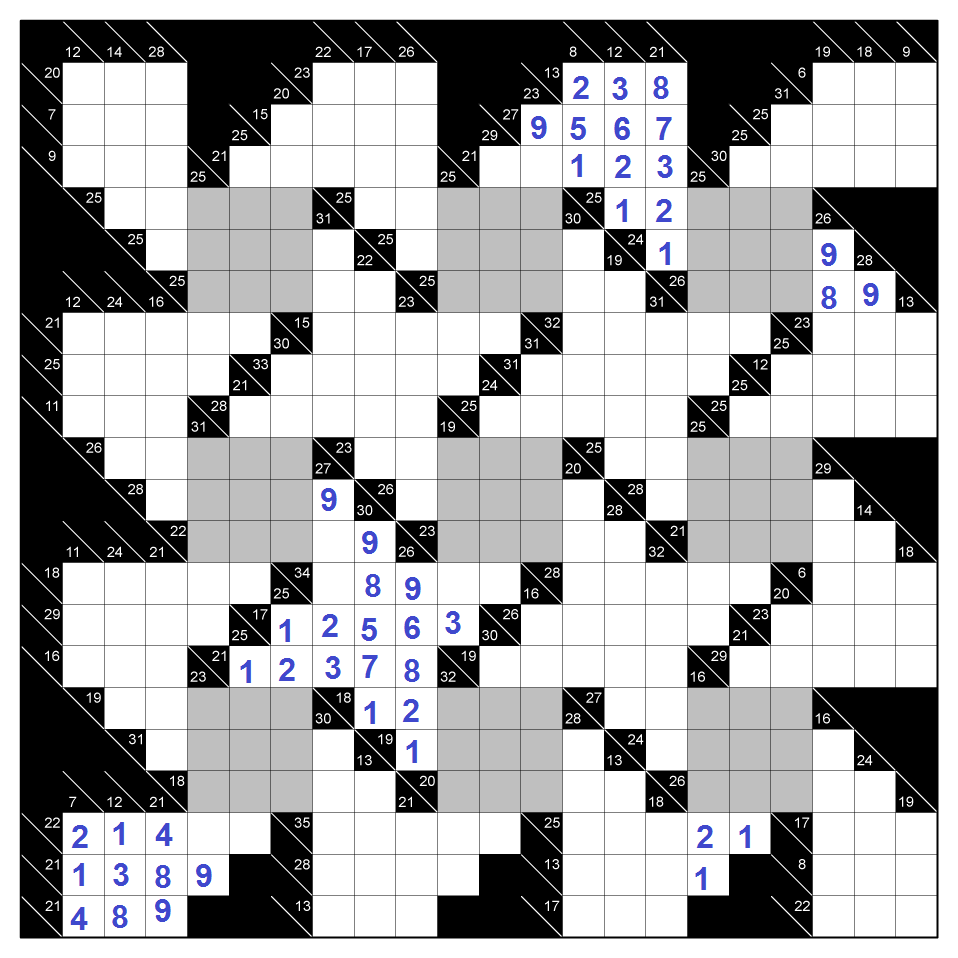 Continuing to the left 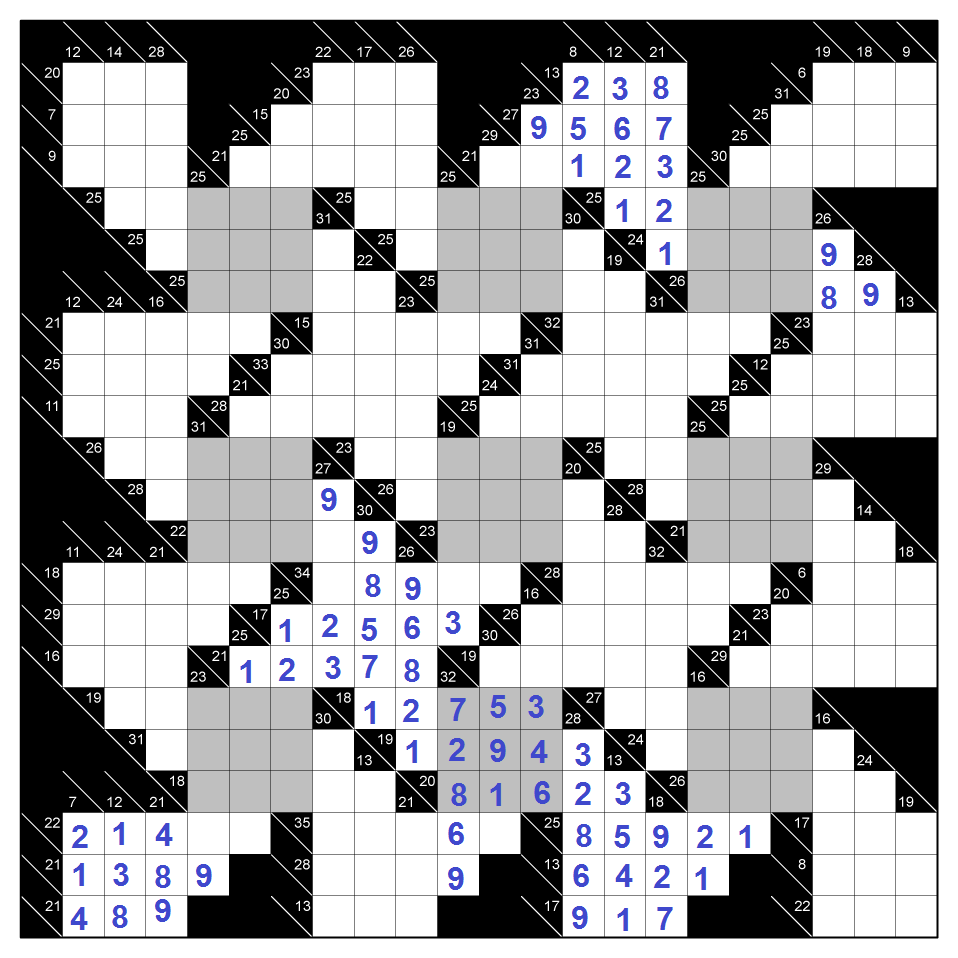 Next we check the 6th sudoku row. The remaining tiles outside the sudoku have to have a sum of 6 which means the four squares have to be filled with 1/2/1/2. 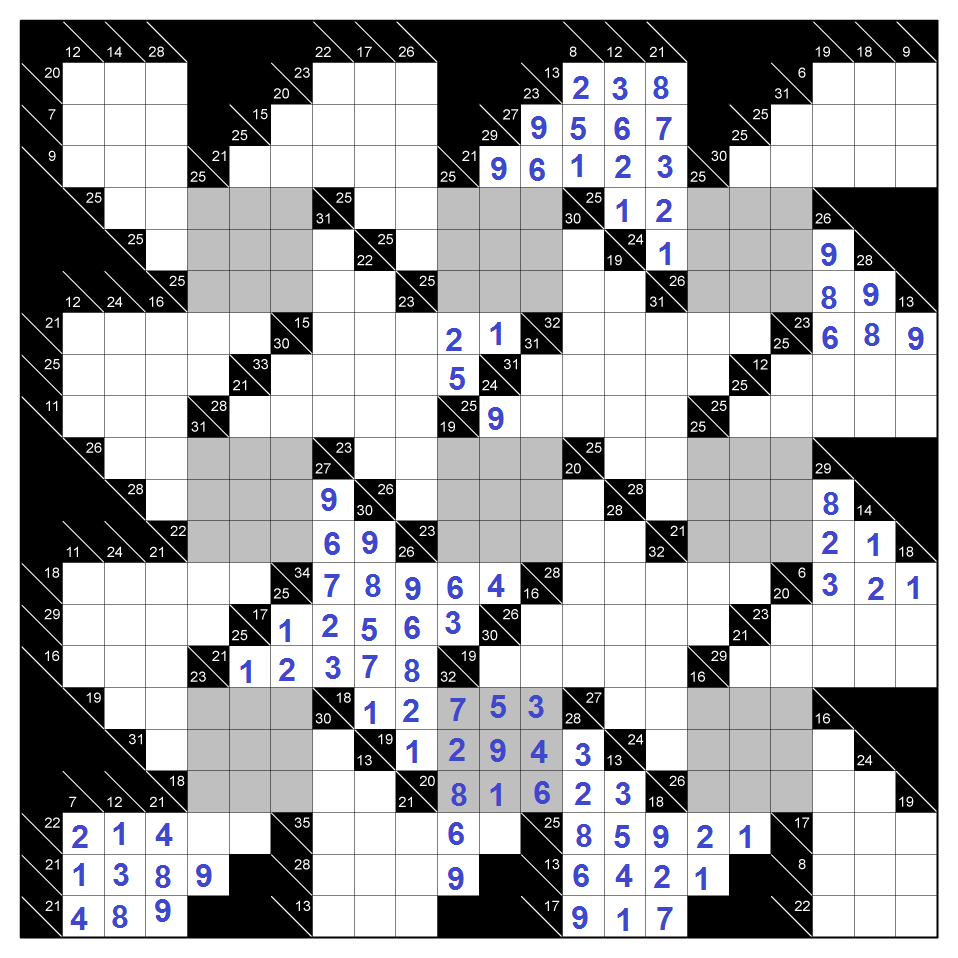 That's all for now. Feel free to continue from this state, but remember that the typo from 28 to 23 is not fixed in my images. 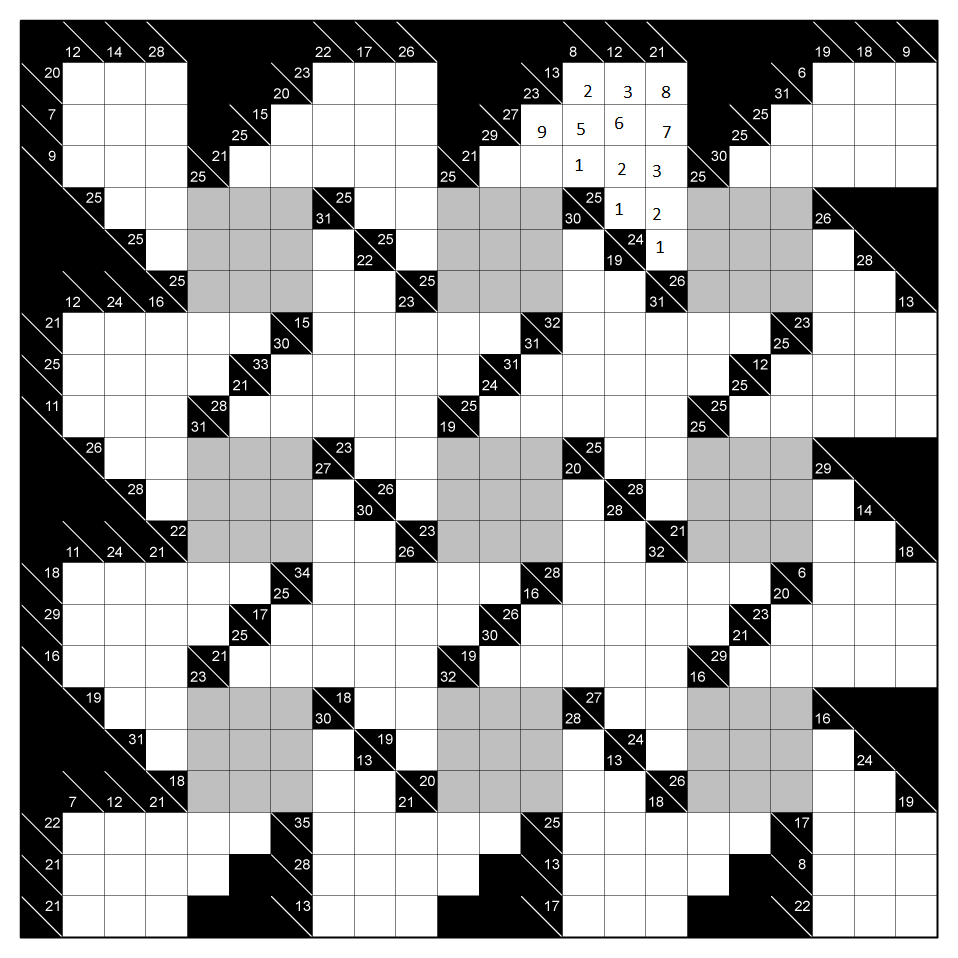 Consider the cells filled above

Now to fill up the rest 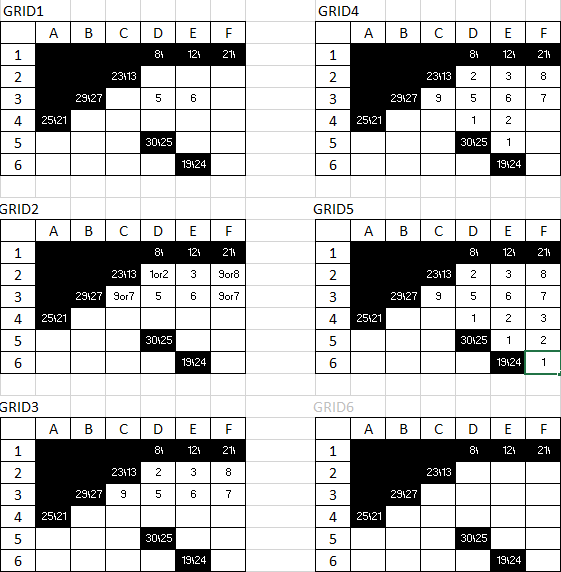 Some additional progress. I failed to keep track of every specific step I made, so I have outlined only the major steps.

edit: I see Mike also posted an update while I was typing mine. I think mine contains a few additional steps w.r.t. his.

Back to the leftmost row we now know it has 3 out of {2,5,7,8}. We have 4 entries left there to make 32-6=26 for the Kakuro. There is no way this can be done by including the 5, so this one can be eliminated. That leaves us with a guaranteed 17 total from the sudoku entries, along with the 6 we already found before. Leaves us with 9 for the bottom entry for the kakuro sum to 32.

If we now look at the center sudoku block, we know that the 2 empty rows will need to be filled with numbers out of {1,2,3,4,5,6}. Since we know everything in the bottom middle block, we can reduce the possibilities here. "1" and "5" must go in the left row, "2" must go in the middle row.

For the top row, middle sudoku block we can do something similar: "7" and "8" must be in the middle row over there. Along with the 9 we already had, we know that "6" cannot be in that same row due to the kakuro constraint, leaving us with either "3" or "4" as the final entry. Because of this, we can eliminate some more for the kakuro sum to 15.

Because of this, we also have enough information in the bottom row middle sudoku to reduce each entry to at most 3 possibilities.

After some additional elimination of single entries, I am now left with the following: 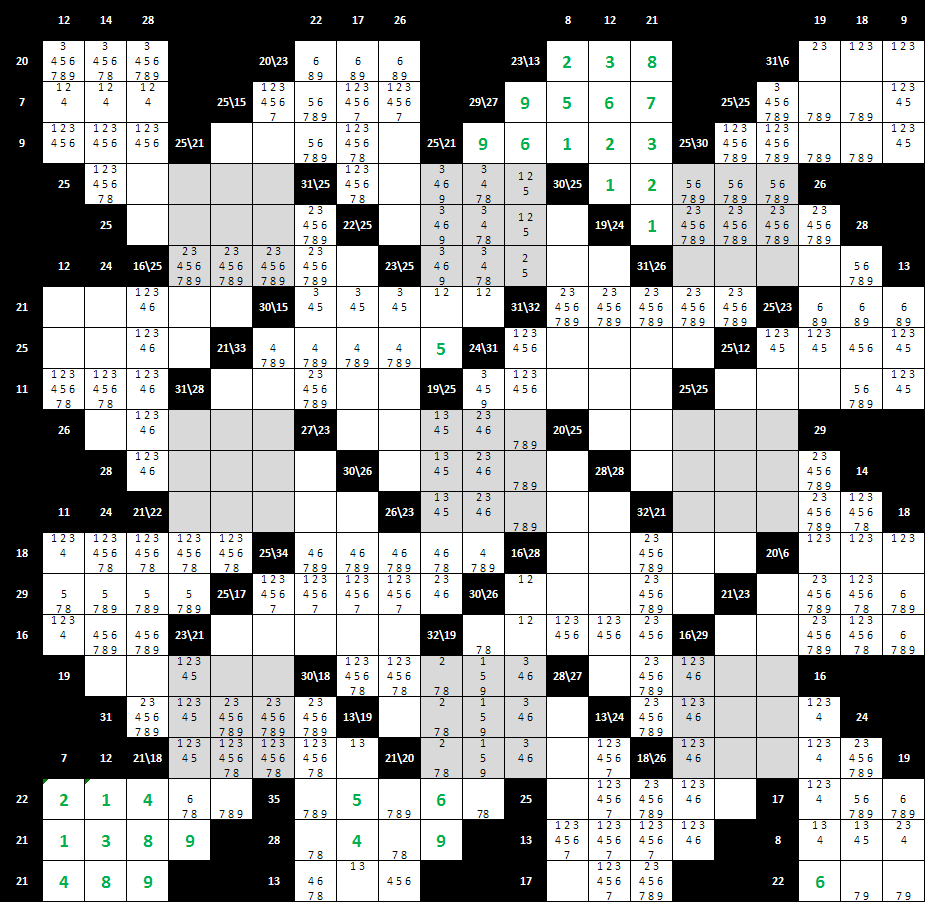 In addition to rand al'thor his/her last answer, we can update the sudoku slightly.

- In the sudoku block mid bottom: we do know there's a 2 forced on the left column of this block. When we fill that in the series of the 32 kakuro, the only possibility of this 32 is 2, 7, 8, 6, 9. When that's filled, we can almost complete the complete middle sector of the sudoku.

I removed some possibilities in the existing solution as well. Updated puzzle can be found here: 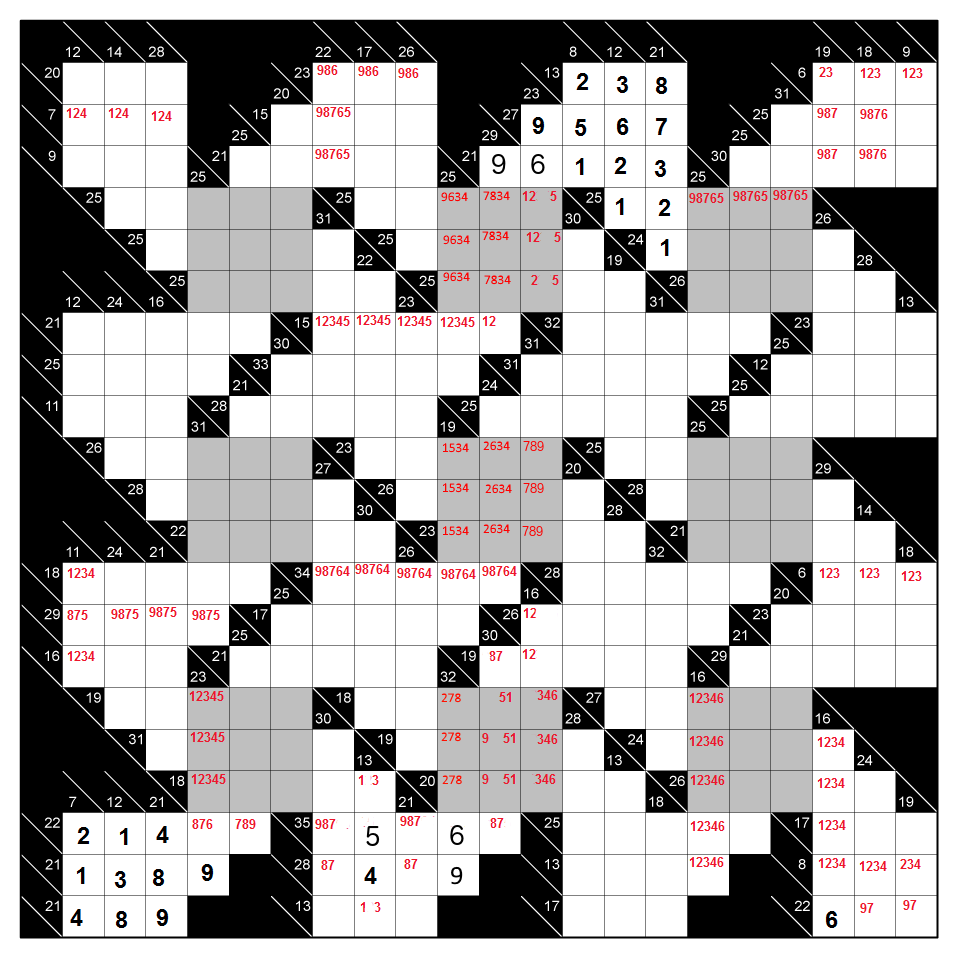 3
Hardest sum sudoku ever! (as well as how to solve them)
37
Sudoku net that is always solvable
8
A spartan skeleton Sudoku
8
Skeleton sudoku, the second
30
Parallelisation
15
Tetromino Sudoku
9
Tetromi-nuri-doku
14
Sudoku Construction Question
17
Octagonal Kurotto
3
Stuck on (a couple of) diagramless kakuros