He was calling her name from the moment he pulled into the driveway and practically knocked the door off his hinges as he barged into her room. It was empty. There were no signs of struggle, no broken furniture, no open window. Instead, there was a single sheet of paper in the center of her otherwise impeccably clean desk. It looked like word find. Vimes hated word finds. He wouldn't have been able to solve it, anyway, what with his vision being all blurry for some reason. He placed the call to dispatch and managed to choke out what he needed.

The squad cars arrived a few minutes later. Lipwig was the first one in the door, already yanking on the glasses. They weren't even really needed this time. The message was easy enough to find just with normal vision. They helped speed the process, though, and they were already programmed to search for lyrics. Solving the puzzle was easy enough but, since it again didn't lead anywhere, a team was left downstairs to make sure the Sergeant was taken care of and the rest of the force left. Vimes sat in his daughter's room, staring at the perfectly aligned photographs on the wall, the bed made with hospital precision, and the desk as organized as ever.

With a start, Vimes realized that something was wrong. There were two blue pens in the cup. Anna only ever kept one of every color; that was all she needed. Eagerly, he pulled them both out. They were identical except that one had something opaque under the clear plastic. He quickly disassembled the pen and unfurled a tiny note. It took him a while to ponder and fiddle with the glasses and he had to step over to his office to use the computer, but he eventually figured it out. It seems that the hyper-modern art glasses were programmed to only find song lyrics so it missed a few words that were also hiding in the jumble. The puzzle seemed so simple that everybody else just presumed they had gotten more clever when they'd really just missed the hidden message. Now, he just had to figure out how to sneak past the team downstairs...

The Note in the Pen: 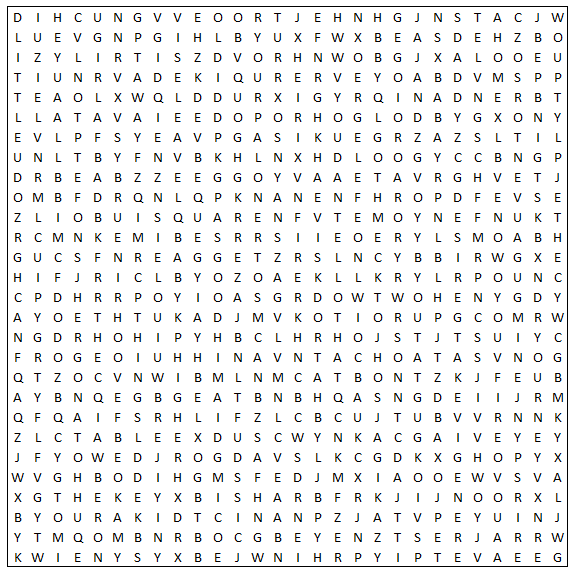 The Follow-up:
If the police stationed at the house had tried to investigate where Seargeant Vimes had gone, they might have found the following in his computer's search history:

The hidden message is:

Convert the message from the pen from ascii to binary:
The number of charactes is 98. 8 bits in the binary representation of a character gives 784 bits, which is the same as 28x28, the grid size for the word search.

Overlay the binary grid on the word search and wherever there are 1's record those characters travelling in row major order.

Decrypt the characters using a Vigenere cipher with "ANNA" as the keyword.

The crossword is meant to contain lyrics of a song we all know. The culprit wasn't too smart by putting all words vertically, but oh well.

The song we're looking for is: 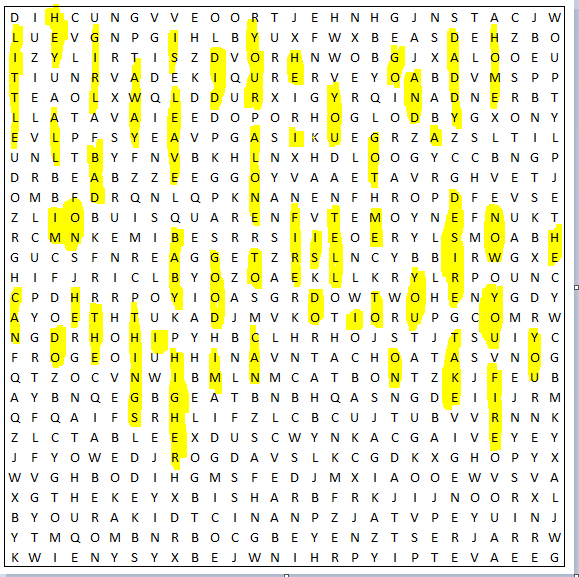 Now, for the other message, the culprit hid some horizontal and vertical details in the crossword as well.

For example, we see "SQUARE", "TWO", "TABLE" and most important, fourth row from the bottom: "THE KEY IS" and the next line says "YOUR KID".
Vertically, we can find "VIGENERE" just below "TAKE". What we might be looking for is a text that can be converted using the daughter's name as a key.

The note in the pen is written, correct English:

"My message is in bases 2. It's meant for no one else but you. Convert and square and overlay. Take the ones and be on your way."

But as OP mentions, we should keep this text without spaces and punctuation. However, I think we need to convert some text, then use the block/square cipher, then overlay on it somewhere on the crossword puzzle and mark the differences with 1. Perhaps this'll lead to another word/text...