The Story:
Sergeant Vimes grunted as he climbed out of his car. Looking up at the latest crime scene, he had an idea he wouldn't be getting back to bed any time soon. He would have shrugged it off to a junior if it hadn't been Chief Vetinari that had broken his slumber and personally asked for him to cover this case. So much for a night off...

The house was one of those "modern" types with a bunch of right angles and cantilevered rooms jutting out over the lawn. The fact that it was the only lit house on the darkened street only served to make it seem all the stranger. As he pushed off from his door, Vimes was practically assaulted by the younger figure running up to him. "Sergeant Vimes!", the eager lad began, "I'm Officer Lipwig. I've just been assigned as your partner."

"Great," thought Vimes, "another kid to 'mentor' until they request a transfer." Aloud, he replied, "Just keep up. All I know so far is that someone is missing and there's a lot of blood. Have you heard anything else?" The Office shook his head and fell into step behind the Sergeant.

In the living room, there was what looked like the remains of a bloody fight. The furniture, walls, and even the ceiling had thick, sticky, red drippings. An officer that Vimes knew well approached, carrying a painting.

"Sarge? Glad you're here. We don't have much in the way of evidence so far. The team is dusting and photographing everything but I got permission to inspect this. It's a colorful mess and doesn't fit with the generally monochromatic decoration everywhere else in this chic abomination of a home. Plus, the frame is cheap plastic, see? Everything in here is marble or ebony or something. Do you think someone left it here on purpose?"

The tired Sergeant took the painting and examined it. It was certainly strange, whatever is was. Colorful geometric shapes meant nothing to him. That's when Lipwig spoke up. "Maybe I can help, Sarge. I was at the Hyper-Modern Art Gallery last week and I got to keep the glasses they give you. If there's a pattern in there, I bet those things can find it."

"You were at the what?" asked Vimes, but the Officer already had some strange glasses on his head and was fiddling with all the buttons and knobs. Figuring he would give the youngster a chance to fail on his own, Vimes waited patiently while the kid played with the gadget. To his surprise, though, Lipwig suddenly exlaimed, "A-ha! That has to be it!" The Office popped the lenses on to the Sergeant's head and grabbed the painting. "Here," he said, "Look what happens when I hold it like this..."

"I have no idea," replied Lipwig, "But it might be some kind of calling card. At least it's somewhere to start."

What message is hidden in the painting? 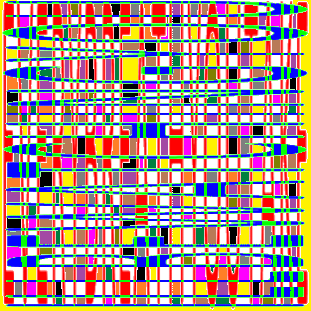 ... to the police from The Police:

rotate the picture 90 degrees clockwise and shrink it on what is then the y-axis (e.g., by looking at it at an angle)

it says ILL BE WATCHING YOU.

8
A Game Of Cat And Mouse: Part 1
8
The Hyper-Modern Kidnapper: Crime Scene #2