What song is this?

The other day, me and my pal Davin were watching this super popular movie and I loved one of the songs I heard in it, and I play piano so I begged him to send me the sheet music for it because I didn't know the name ...but when he sent it, it looks like the file got corrupted during transit and looks like this now: 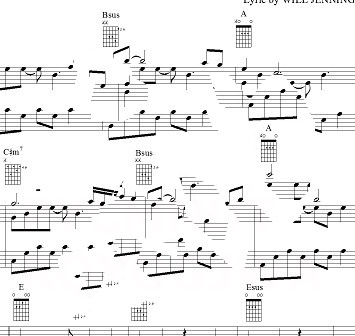 I couldn't make anything of it, so I asked Davin and he told me its fine, I just need to look harder and I'll find the song name so I can google it myself. So what song is this?

The top of the image barely shows "Lyric by Will Jenning" -
Will Jennings wrote lyrics for some songs that have appeared in popular movies, including

"My Heart Will Go On", which is in Titanic (Celine Dion)
"One Day I'll Fly Away", which is in Moulin Rouge (Nicole Kidman)
"Up Where We Belong", which is in An Officer and a Gentleman (Joe Cocker, Jennifer Warnes)

among others. Having said that, here's the gist of the puzzle.

Hint 2 tells us: You'll need at least a basic image editing program.
Hint 3 goes on to say: The notes on the sheet music are irrelevant.
Both of these point us to look at the image not for its content but for what it might be concealing. And sure enough, there is text hidden in the image; replacing the white background with red, you see this:

This is interesting, and points us the rest of the way.

Thanks to a friendly reminder from @kayzeroshort who points out we're given the friend's name, I take another look at Hint 1: What's in a name?

What, indeed. What's in his pal Davin's name is, in fact, the key to the puzzle...
Using DAVIN as Vigenére key to the text we found, gives:
MYHEART WILLGOON

Making the name of the song entirely clear, and confirms that one of the songs I found from the lyricist's name is in fact the correct one.

So the song is

"My Heart Will Go On", and you were watching Titanic.

Not the answer you're looking for? Browse other questions tagged cipher steganography music or ask your own question.